Dialysis, Distress, and Difficult Conversations: Living with a Kidney Transplant
Next Article in Special Issue

Video-Assisted Stylet Intubation with a Plastic Sheet Barrier, a Safe and Simple Technique for Tracheal Intubation of COVID-19 Patients

Efficacy of Acupuncture, Intravenous Lidocaine, and Diet in the Management of Patients with Fibromyalgia: A Systematic Review and Network Meta-Analysis

Fibromyalgia (FM) is a condition known for its chronic widespread musculoskeletal pain. It is diagnosed by the American College of Rheumatology (ACR) criteria 2016 [1]. Fibromyalgia patients are usually characterized by moderate-to-severe symptoms including widespread pain, point tenderness, cognitive disturbance, sleep disturbance, psychiatric, and multiple somatic symptoms [1,2,3]. The balance impairments and functionality can considerably influence the FM patients’ quality of life (QoL) [4,5,6]. So, FM patients have difficulties in their daily activities’ performance, and their ability to work [7,8,9,10].
One of the recommended management options for FM includes acupuncture [11]. The reviews offer positive evidence for its efficacy in the improvement of pain and stiffness compared with conventional treatment, or no treatment or drug therapy [12,13]. However, there is no support for its use for physical function disabilities. Acupuncture’s benefits in balance impairment were observed in patients with conditions other than FM [14,15].
FM patients are often treatment-resistant or suffer from unbearable side effects using conventional oral medications. Intravenous (IV) lidocaine is a treatment having peripheral and central-mediated analgesic, anti-inflammatory, as well as antihyperalgesic effects [16,17]. IV lidocaine has been reported to be safe and effective in producing clinically efficient analgesia in patients suffering from various pain disorders [18].
In addition to this, the role of diet has also been investigated as a treatment for FM, as there have been various linked deficiencies to FM. However, in spite of the encouraging results, this cannot be solid evidence, as much of the available regarding this topic had poor quality, different study designs, inadequate sample sizes, and absence of control groups [19].
A recent study suggested that FM was significantly associated with higher risks for suicidal ideations, suicide attempts, and death by suicide in comparison with the general population [20]. So, it is crucial to investigate the treatment options for FM patients, whether physically or psychologically related. There is a significant gap in the literature among FM patients treated with acupuncture, lidocaine, and diet. Some studies reported that these interventions were effective, while others reported they were non-effective.
Therefore, the objective of this study was to conduct a network meta-analysis to compare acupuncture, lidocaine, and diet with other comparators such as physiotherapy and sham/placebo in FM patients.

This is a systematic review and network meta-analysis, which was performed strictly according to the preferred reporting items of PRISMA guidelines [21,22]. The network meta-analysis is a type of meta-analysis that compares multiple treatments (three or more) by employing direct comparisons of interventions within randomized controlled trials (RCTs) as well as indirect comparisons across trials based on a common comparator. The direct and indirect evidence can be combined as a weighted average, and made comparisons between each arm included.

We included RCTs comparing acupuncture, diet, and lidocaine with other comparators such as physiotherapy and sham/placebo in fibromyalgia patients. All studies included were compared with each other by direct or indirect comparisons. We excluded abstracts, non-English studies, articles other than RCTs, and studies without an outcome of interest or used different scales. To exclude the duplicates, we used Endnote software. Two authors initially screened the title and abstract; then, the other two authors screened the relevant full texts and did a manual screening to ensure all suitable articles were included.

We used the Cochrane risk of bias tool for RCTs [31]. The domains include random sequence generation, allocation concealment, blinding of participants and personnel, blinding of outcome assessment, incomplete outcome data, selective reporting, and other bias. The assessment consists of low, high, or unclear risk of bias. Two authors assessed the risk of bias in all studies, and the supervisor solved any disagreements.

The initially identified records were 4220 in number. Following duplicates’ removal, the remaining records (3561) were screened. Out of them, 168 went through full-text screening. Finally, there were 23 included studies in the analysis [32,33,34,35,36,37,38,39,40,41,42,43,44,45,46,47,48]. Figure 1 PRISMA included the studies’ summary and population’s baseline characters.
All the studies were RCTs. The countries included Spain, Brazil, the USA, Turkey, and others. The interventions included acupuncture, lidocaine, fluoxetine, physiotherapy, nutraceutical, (Inflammatory Gut–Brain Axis Control) (IGUBAC)-Diet, weight reduction, olive tree-based food supplement, transcutaneous electrical nerve stimulation (TENS), cupping, and sham/placebo. The total sample size was 1409 patients. The majority of the included patients were females, see Table 1.

All outcomes assessed under random effect model and the results were heterogeneous (p < 0.0001, I2 = 95.3–99.4%). The heterogeneity could not be solved by the leave-one-out method.

According to Egger et. al., we could not assess the publication bias of the stiffness and depression outcomes because the analyses included less than ten studies. We noticed no publication bias in the QoL and pain outcomes by visual inspection of the funnel plot and p-value of Egger’s test. Figure 7 and Figure 8 showed the funnel plots of the QoL and pain outcomes, respectively.

The results showed a significant improvement in the QoL with acupuncture and physiotherapy, and the other comparators showed no significant differences. As regards the pain, the study showed a significant decrease in the acupuncture group only. Regarding depression, there was a significant reduction with acupuncture. On the other hand, there were no significant variations with physiotherapy, or weight reduction. Finally, regarding the stiffness, the results showed no significant differences between acupuncture, fluoxetine, and physiotherapy compared with sham/placebo.
Mayhew and Ernst previously did not recommend acupuncture for FM in their meta-analysis of RCTs [49]. Other reviews also had similar negative conclusions and results to them [13,50,51]. Furthermore, a Cochrane review of 9 studies with 395 patients showed large differences in results. Three showed small, short-lasting effects (all electro-acupuncture), and six did not differ from sham acupuncture [12]. All these reviews included a small number of studies with a small sample size, which may affect the results. In addition, the editorial by Colquhoun and Novella reported that acupuncture is ineffective, and the trials’ positive results are probably false-positive results due to multiple reasons, including bias and low prior probability [52]. On the other hand, the most recent meta-analysis of them concluded that acupuncture was both effective and safe as a treatment for FM patients and recommended its use for FM management [53]. Similar to our study, they also showed pain reduction, and an improvement in the QoL. The analgesic effects of acupuncture activate both the peripheral and central pain control systems through the release of different endogenous opioids or nonopioid compounds, for example, beta-endorphins, enkephalins, dynorphins, serotonin, norepinephrine, and others [54,55,56].
In FM patients, nutritional therapy may be controversial, yet promising. Improvements in pain and functional repercussion in FM patients appeared to occur with a hypo-caloric diet, a raw vegetarian diet, or a diet low in fermentable oligo-, di-, monosaccharides, and polyols, in addition to the QoL and sleep, anxiety and depression, and inflammatory biomarkers. However, those data had several limitations [57]. Various other studies showed promising but limited data about the role of diet in FM patients [58,59]. Our study showed contrary results, as the diet did not show significant differences.
In a previous pilot study, lidocaine showed improvements in the VAS pain scale in FM patients, suggesting that periodic IV infusion of lidocaine might offer extra benefits for FM patients receiving conventional treatment [41]. On the other hand, later on, other studies showed that lidocaine had no improvements when added to amitriptyline [34,60]. Similar to them, our study showed no significant improvements with lidocaine. Giraldes et al. suggested that the absence of difference in the analgesic effect might have been because amitriptyline alone had a sufficient effect. They also suggested that lidocaine required to be administered at smaller intervals to gain a difference in effect [60].
Our inclusion of RCTs only, and the moderate to high quality of the included studies added more validity to our data. Even though our study included various studies, those studies mainly included a small sample size, which limits our data. Another limitation in our study is the different ways of diagnosing fibromyalgia patients in each included study, even when using the ACR criteria. Furthermore, most of the included studies were mainly about acupuncture, and they had different types, points, and numbers of acupuncture. Another limitation includes that some studies had different time points.
Therefore, we recommend future research focus on assessing the effect of diet and lidocaine on FM patients. We also recommend future research have similar time points and use a specific scale for each outcome.

The following supporting information can be downloaded at: https://www.mdpi.com/article/10.3390/healthcare10071176/s1.

The datasets generated during and/or analyzed during the current study are available in the Supplementary Files S2, S3, S4, and S5.

Appendix A. The Full Search Strategy of Databases 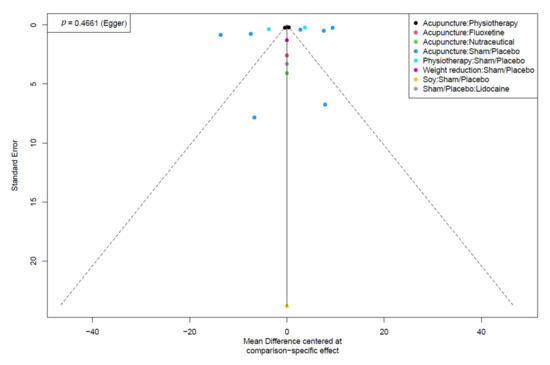 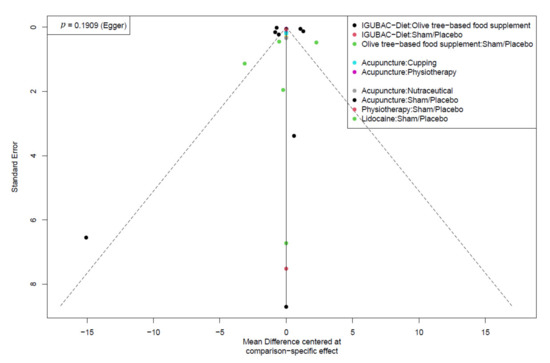 Table 1. Summary and baseline characteristics of the included studies.
Table 1. Summary and baseline characteristics of the included studies.
BMI: body mass index, FIQ: fibromyalgia impact questionnaire, BDI: Beck Depression Inventory, VAS: visual analogue scale, SD: standard deviations, NR: not reported, ACR: American College of Rheumatology, IGUBAC: inflammatory gut–brain axis control, TENS: transcutaneous electrical nerve stimulation, cun: width of a person’s thumb at the level of the knuckle, *: median (quartile).
© 2022 by the authors. Licensee MDPI, Basel, Switzerland. This article is an open access article distributed under the terms and conditions of the Creative Commons Attribution (CC BY) license (https://creativecommons.org/licenses/by/4.0/).
We use cookies on our website to ensure you get the best experience. Read more about our cookies here.
Accept
We have just recently launched a new version of our website. Help us to further improve by taking part in this short 5 minute survey here. here.
Never show this again