Effects of Family Ownership, Debt and Board Composition on Mexican Firms Performance
Previous Article in Journal

How the Economic and Financial Situation of the Community Affects Sport Clubs’ Resources: Evidence from Multi-Level Models

Modern and Traditional Methods for Measuring Money Supply: The Case of Saudi Arabia

Simple-sum monetary aggregates (widely denoted by M1, M2, and M3) are commonly used by central banks worldwide. Those monetary indexes are derived from a simple accounting identity. The implicit assumption made when using simple-sum monetary aggregates is that all components are perfect one-for-one substitutes in producing liquidity services. Broad aggregates, which group currency with time deposits, will certainly fail to satisfy this assumption.
Barnett [1,2] proposed monetary indexes that are consistent with monetary aggregation theory and statistical index number theory. He created new monetary measures by linking microeconomic theory with index number theory, calling them “Divisia” monetary indexes. 1 The Divisia monetary index is a money supply measure that weights the monetary components (e.g., currency, demand deposits, and savings and time deposits) according to their usefulness in transactions. The Divisia index accounts for the variability of the share weights among monetary assets within an aggregate, when measuring the monetary service flows of the economy. The index depends upon prices and quantities of monetary assets, where the price of a monetary asset is called its user cost. 2
User cost is the interest return forgone by holding a monetary asset rather than holding a higher return (usually less-liquid) asset. The user cost of money is its opportunity cost and thereby the price of a monetary asset. The seminal work of Barnett [1,2,7] derived the Jorgensonian user cost of monetary assets from a rigorous Fisherine intertemporal consumption expenditure allocation model. His findings have inaugurated the use of index number theory into monetary economics.
A large number of central banks produce Divisia monetary aggregates. While some central banks make these indexes available to the public, many central banks only provide and use them internally. Monetary authorities supplying Divisia monetary aggregates internally or publicly include the Federal Reserve Bank of St. Louis, the European Central Bank, the Bank of England (BoE), the Bank of Japan, and the National Bank of Poland. 3
The International Monetary Fund (IMF) officially supports using the new measure of money. In its “Monetary and Financial Statistics: Compilation Guide”, the IMF comments on the Divisia index:

“A monetary aggregate that is an unweighted sum of components has the advantage of simplicity, but a monetary aggregate with weighted components may be expected to exhibit a stronger link to aggregate spending in an economy. By weighting the monetary components, a Divisia Money formulation takes account of the trade-off between the medium-of-exchange and store-of-value functions of holding of money components.”

Such support from the IMF is understandable, given the fact that Divisia monetary aggregates for a number of countries have been shown to have more robust relationships with major macroeconomic variables than have the traditional simple sum aggregates (see, e.g., Serletis and Gogas [8]).
Building on the work of Alkhareif and Barnett [6,9], this paper provides new monetary measures for Saudi Arabia. Our Divisia monetary indexes can not only provide a wider range of tools, but also can serve as a vehicle for researchers to improve studies on Saudi monetary policy. 4 The effectiveness of monetary policy is partly conditional on the data used by policymakers at central banks to make policy decisions. The higher the quality of the data the policymakers use, the higher the probability that they will be making well-informed policy decisions. The ultimate goal of this work is to provide reliable monetary measures that can be used by the Saudi Arabian Monetary Agency (SAMA) to improve its database, and hence the monetary policy in the kingdom.
The remainder of this paper is organized as follows: Section 2 provides a brief overview of the theoretical background relating to monetary aggregation and statistical index numbers, Section 3 describes the data used in this paper, Section 4 constructs Divisia monetary aggregates for Saudi Arabia, and Section 5 concludes the paper.

The analysis in this study is based on monthly data starting from January 1999 and ending in October 2013. The period was constrained by the availability of data for several of the series. Monetary data were obtained from SAMA while interest rates on deposits were extracted from Bloomberg database. Variables taken into consideration in the calculation of the Divisia monetary aggregates include: currency in circulation, overnight deposits, demand deposits, savings and time deposits, quasi-money, overnight deposit rates, rate of return on demand deposits, interest rates on savings and time deposits, and interest rates on short-term loans. The domestic short-term loan rate is usually the highest and hence used as the benchmark rate for most periods. The benchmark rates as well as the user costs for all monetary assets were obtained from Alkhareif [12]. All quantities have been seasonally adjusted using the X11 procedure. 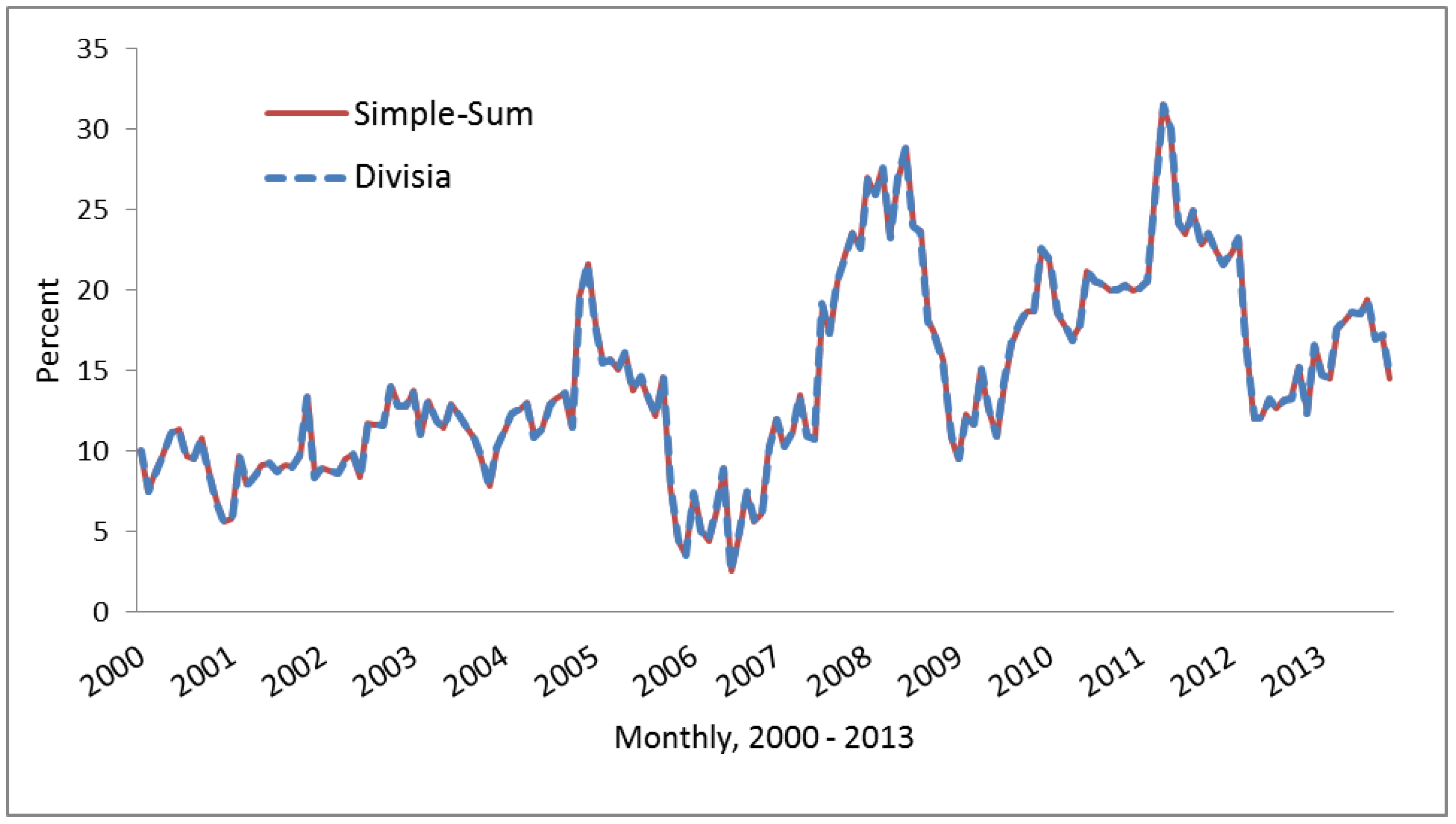 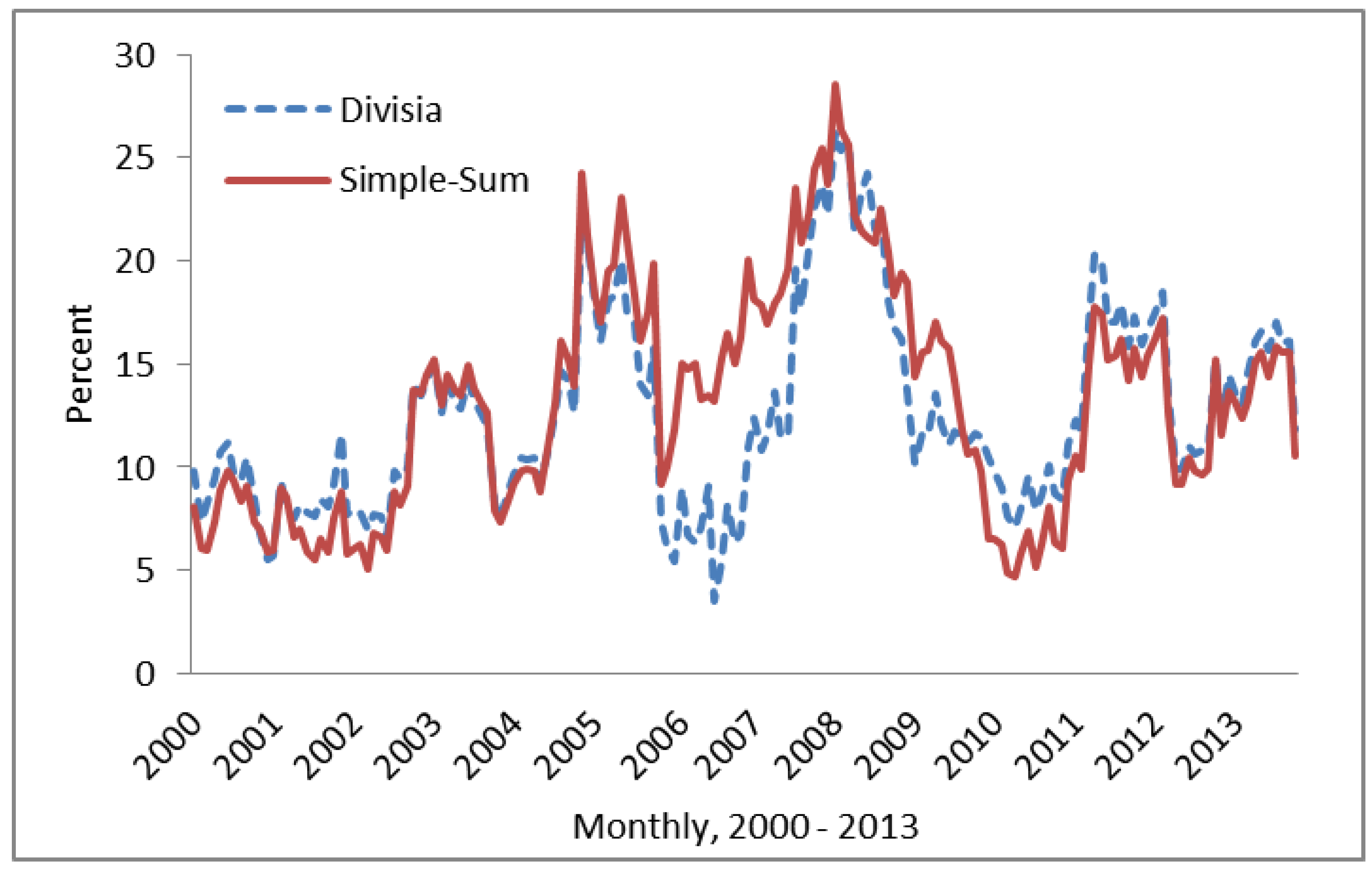 The year-over-year growth rates for the broad Divisia and the M2 aggregate interchangeably shift over time. The most noticeable divergence between the Divisia index and the M2 aggregate started in early 2005. The probable cause of this divergence was due to SAMA hiking short-term interest rates steadily during the year—for example, the repo rate was raised from 2.7 percent at beginning of 2005 to 5.5 percent at mid-2007. The Saudi stock market meltdown in 2006, when the market dropped by 50 percent between February and June of that year, was also accurately captured by the Divisia monetary indexes. Note that the year-over-year growth rates for the Divisia index fell sharply during the first six months of 2006 to around three percent and bounced up to reach its maximum in early 2008 (Figure 2). 9 During the recent financial crisis, the Divisia growth rate fluctuated from above simple-sum M2 in late 2008 to below in early 2009.
Interest rates on savings and time deposits have remained exceptionally low after the recent financial crisis. Growth rates of the two monetary aggregation indexes converge as components within those aggregates become increasingly perfect substitutes to one another. The gap between Divisia and simple-sum broad money supply growth rates is expected to be small as long as the interest rates on savings and time deposits are at their low levels. 10

Using modern aggregation and index number theory, based on Theil [15] and Barnett [2,16], this paper constructs the Divisia monetary indexes for Saudi Arabia. These indexes are properly weighted monetary aggregates which provide critical information regarding inside liquidity created by financial intermediaries. The findings suggest a high correlation between the two approaches of aggregation only for the narrow monetary aggregates, as perfect substitutability among components within these aggregates hold. On the other hand, there is a clear distinction between the two approaches of aggregation for the broad monetary aggregates. The gap between growth rates of the two monetary measures widen during the recent global economic downturns, and this gap has been shrinking afterwards.
The Saudi Arabian Monetary Agency could benefit from this research in enhancing its monetary database, whereas economic researchers and financial analysts can use the new money supply indexes to carry out various applications and empirical studies.