Chemical and Enantioselective Analysis of the Leaf Essential Oil from Piper coruscans Kunth (Piperaceae), a Costal and Amazonian Native Species of Ecuador

GmNMHC5, A Neoteric Positive Transcription Factor of Flowering and Maturity in Soybean

The soybean (Glycine max (L.) Merr.) is an important oil and food crop. Its growth and development is regulated by complex genetic networks, and there are still many genes with unknown functions in regulation pathways. In this study, GmNMHC5, a member of the MADS-box protein family, was found to promote flowering and maturity in the soybean. Gene expression profiling in transgenic plants confirmed that the 35S:GmNMHC5 T3 generation had early flowering and precocity. We used CRISPR-Cas9 to edit GmNMHC5 and found that late flowering and maturity occurred in Gmnmhc5 lines with stable inheritance. Remarkably, in the 35S:GmNMHC5 plants, the expression of flowering inhibitors GmFT1a and GmFT4 was inhibited. In addition, overexpression of GmNMHC5 in ft-10 (a late flowering Arabidopsis thaliana mutant lacking Flowering Locus T (FT) function) rescued the extremely late-flowering phenotype of the mutant A. thaliana. These results suggest that GmNMHC5 is a positive transcription factor of flowering and maturity in the soybean, which has a close relationship with FT homologs in the flowering regulation pathway. This discovery provides new ideas for the improvement of the flowering regulation network, and can also provide guidance for future breeding work. View Full-Text
Keywords: Glycine max; GmNMHC5; flowering regulation; CRISPR-Cas9 Glycine max; GmNMHC5; flowering regulation; CRISPR-Cas9
►▼ Show Figures 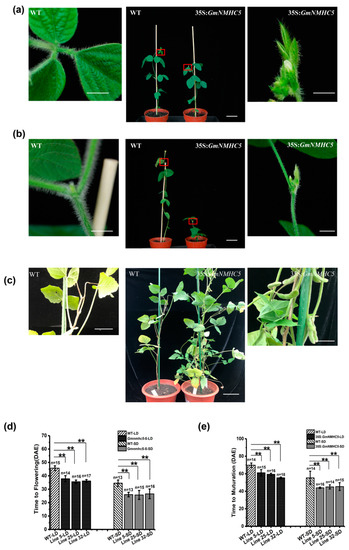