Radiation Interception, Conversion and Partitioning Efficiency in Potato Landraces: How Far Are We from the Optimum?

The significant increase in grain yield and quality are often antagonistic but a constant demand for breeders and consumers. Some genes related to cytochrome P450 family are known for rice organ growth but their role in controlling grain yield is still unknown. Here, we generated new rice mutants with high yield and improved aroma by simultaneously editing three cytochrome P450 homoeologs (Os03g0603100, Os03g0568400, and GL3.2) and OsBADH2 with the CRISPR/Cas9 system, and RNA-sequencing and proteomic analysis were performed to unveil the subsequent changes. High mutation efficiency was achieved in both target sites of each gene and the mutations were predominantly only deletions, while insertions were rare, and no mutations were detected in the five most likely off-target sites against each sgRNA. Mutants exhibited increased grain size, 2-acetyl-1-pyrroline (2AP) content, and grain cell numbers while there was no change in other agronomic traits. Transgene-DNA-free mutant lines appeared with a frequency of 44.44% and homozygous mutations were stably transmitted, and bi-allelic and heterozygous mutations followed Mendelian inheritance, while the inheritance of chimeric mutations was unpredictable. Deep RNA sequencing and proteomic results revealed the regulation of genes and proteins related to cytochrome P450 family, grain size and development, and cell cycle. The KEGG and hub-gene and protein network analysis showed that the gene and proteins related to ribosomal and photosynthesis pathways were mainly enriched, respectively. Our findings provide a broad and detailed basis to understand the role of CRISPR/Cas9 in rice yield and quality improvement. View Full-Text
Keywords: rice; yield; cytochrome P450; CRISPR/Cas9; mutations; transcriptome; proteome rice; yield; cytochrome P450; CRISPR/Cas9; mutations; transcriptome; proteome
►▼ Show Figures 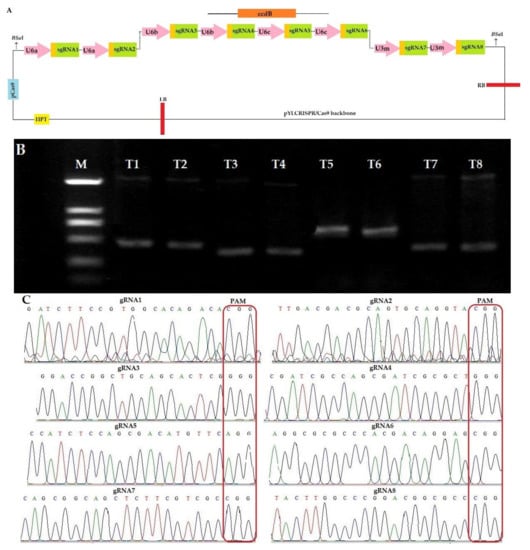