Effect of Silicon on the Tolerance of Wheat (Triticum aestivum L.) to Salt Stress at Different Growth Stages: Case Study for the Management of Irrigation Water

This paper aims to determine the most tolerant growth stage(s) of wheat to salinity stress with the addition of silicon. The aim was to investigate whether saline water could be used instead of good quality water for irrigation without implicating a greater risk to crop production. Local wheat cv. Gimmiza 11 was germinated and grown in sand cultures. Four different NaCl salinity levels were used as treatments: 0, 60, 90 and 120 mM. This was in the presence of 0 and 0.78 mM Si which added as sodium meta- silicate (Na2SiO3·9H2O). Both the NaCl and Si treatments were carried out using a full strength nutrient solution that was adjusted at pH 6.0 and used for irrigation in four replications. The application of Si with the saline nutrient media significantly enhanced superoxide dismutase (SOD) and catalase (CAT) activities in plant leaves at the booting stage compared to the other stages. This was associated with a marked decline in the H2O2 content. At the booting stage, the Si treatment promoted CAT activity in 120 mM NaCl-stressed leaves compared to the leaves treated with only 120 mM NaCl solution. SOD showed greater prevalence at the booting stage when Si was added into the saline media, and it also revealed maximum activity at the milky stage with salinity stress. This was associated with a smaller reduction in shoot fresh and dry weights, greater reduction in the leaf Na+ content and an increase in the K+ content, which ultimately increased the cytosolic K+/Na+ ratio. Chlorophyll a and b and carotenoid (total photosynthetic pigments) were also higher at the booting stage of salt-stressed plants treated with Si compared to other stages. Accordingly, Si application enhanced the salt tolerance of wheat and reduced the inhibitory effect of Na+ and oxidative stress damage as growth proceeded towards maturity, particularly at the booting stage. This shows that saline water can be used for wheat irrigation at the booting stage (much water is consumed) when good quality water is not available for supplemental irrigation. A field study is needed to confirm the greenhouse results. View Full-Text
Keywords: Triticum aestivum; salinity; silicate; growth stages; antioxidants Triticum aestivum; salinity; silicate; growth stages; antioxidants
►▼ Show Figures 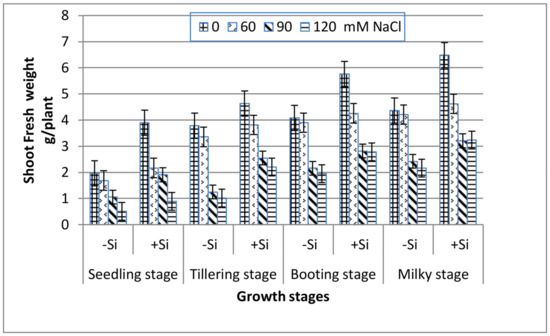