For a long time, the Balkan endemic species Crocus pallidus has been unconfirmed and neglected for the flora of Bulgaria. It has remained an uncertain species from the Balkans, often listed as a synonym of C. weldenii. The morphological resemblance to the albinistic forms of C. chrysanthus has led to incorrect identification in the past, resulting in uncertainty regarding the distribution of this species in Bulgaria. In this regard, a detailed morphological and anatomical study of Bulgarian natural populations was carried out. A phylogenetic comparison in the ITS region of two Bulgarian populations of C. pallidus with other related species was conducted, revealing the distinction of C. pallidus populations from the closely related C. weldenii. The recently described new endemic species from Turkey, C. thracicus, shows very similar morphological and anatomical characteristics to C. pallidus and logically continues the distribution range in Eastern Thrace, along the Black Sea coast. We have a basis for suggesting that it should be treated as a synonym of C. pallidus. View Full-Text
Keywords: Iridaceae; Bulgaria; ITS region; Crocus pallidus; Crocus thracicus; Nudiscapus; anatomy; morphology Iridaceae; Bulgaria; ITS region; Crocus pallidus; Crocus thracicus; Nudiscapus; anatomy; morphology
►▼ Show Figures 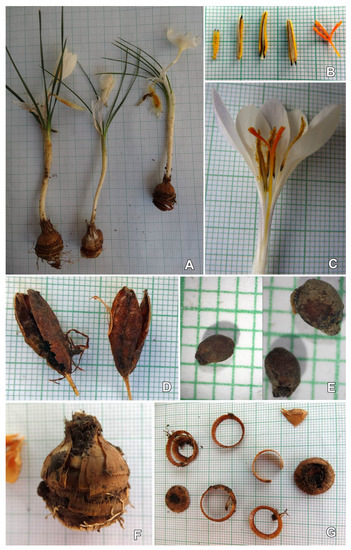