To improve microgreen yield and nutritional quality, suitable light spectra can be used. Two species—amaranth (Amaranthus tricolor L.) and turnip greens (Brassica rapa L. subsp. oleifera (DC.) Metzg)—were studied. The experiment was performed in a controlled LED environment growth chamber (day/night temperatures of 24 ± 2 °C, 16 h photoperiod, and 50/60% relative humidity). Three emission wavelengths of a light-emitting diode (LED) were adopted for microgreen lighting: (1) white LED (W); (2) blue LED (B), and (3) red LED (R); the photosynthetic photon flux densities were 200 ± 5 µmol for all light spectra. The response to light spectra was often species-specific, and the interaction effects were significant. Morphobiometric parameters were influenced by species, light, and their interaction; at harvest, in both species, the fresh weight was significantly greater under B. In amaranth, Chl a was maximized in B, whereas it did not change with light in turnip greens. Sugar content varied with the species but not with the light spectra. Nitrate content of shoots greatly varied with the species; in amaranth, more nitrates were measured in R, while no difference in turnip greens was registered for the light spectrum effect. Polyphenols were maximized under B in both species, while R depressed the polyphenol content in amaranth. View Full-Text
Keywords: LED; light spectrum; ascorbic acid; chlorophylls; carotenoids LED; light spectrum; ascorbic acid; chlorophylls; carotenoids
►▼ Show Figures 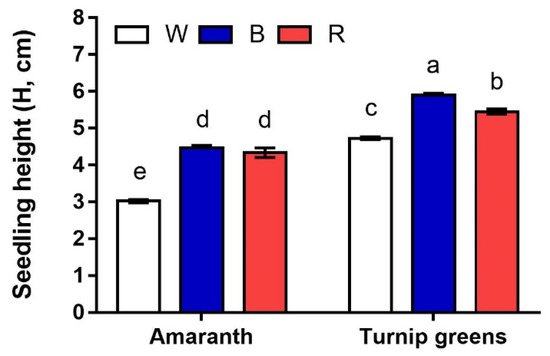