Paper Spray Mass Spectrometry on the Analysis of Phenolic Compounds in Rhynchelytrum repens: A Tropical Grass with Hypoglycemic Activity
Previous Article in Journal

Black pepper (Piper nigrum) is among the world’s most popular spices. Its pungent principle, piperine, has already been identified 200 years ago, yet the biosynthesis of piperine in black pepper remains largely enigmatic. In this report we analyzed the characteristic methylenedioxy bridge formation of the aromatic part of piperine by a combination of RNA-sequencing, functional expression in yeast, and LC-MS based analysis of substrate and product profiles. We identified a single cytochrome P450 transcript, specifically expressed in black pepper immature fruits. The corresponding gene was functionally expressed in yeast (Saccharomyces cerevisiae) and characterized for substrate specificity with a series of putative aromatic precursors with an aromatic vanilloid structure. Methylenedioxy bridge formation was only detected when feruperic acid (5-(4-hydroxy-3-methoxyphenyl)-2,4-pentadienoic acid) was used as a substrate, and the corresponding product was identified as piperic acid. Two alternative precursors, ferulic acid and feruperine, were not accepted. Our data provide experimental evidence that formation of the piperine methylenedioxy bridge takes place in young black pepper fruits after a currently hypothetical chain elongation of ferulic acid and before the formation of the amide bond. The partially characterized enzyme was classified as CYP719A37 and is discussed in terms of specificity, storage, and phylogenetic origin of CYP719 catalyzed reactions in magnoliids and eudicots. View Full-Text
Keywords: black pepper; cytochrome P450; enzyme activity; methylenedioxy bridge; piperine; Piper nigrum; yeast expression black pepper; cytochrome P450; enzyme activity; methylenedioxy bridge; piperine; Piper nigrum; yeast expression
►▼ Show Figures 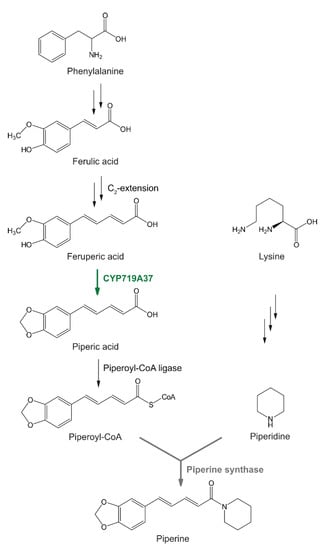