Recent Advances in the Genetic, Anatomical, and Environmental Regulation of the C. elegans Germ Line Progenitor Zone
Next Article in Special Issue

Disruption of the Heparan sulfate (HS)-biosynthetic gene N-acetylglucosamine N-Deacetylase/N-sulfotransferase 1 (Ndst1) during nervous system development causes malformations that are composites of those caused by mutations of multiple HS binding growth factors and morphogens. However, the role of Ndst function in adult brain physiology is less explored. Therefore, we generated mice bearing a Purkinje-cell-specific deletion in Ndst1 gene function by using Cre/loxP technology under the control of the Purkinje cell protein 2 (Pcp2/L7) promotor, which results in HS undersulfation. We observed that mutant mice did not show overt changes in the density or organization of Purkinje cells in the adult cerebellum, and behavioral tests also demonstrated normal cerebellar function. This suggested that postnatal Purkinje cell development and homeostasis are independent of Ndst1 function, or that impaired HS sulfation upon deletion of Ndst1 function may be compensated for by other Purkinje cell-expressed Ndst isoforms. To test the latter possibility, we additionally deleted the second Purkinje-cell expressed Ndst family member, Ndst2. This selectively abolished reproductive capacity of compound mutant female, but not male, mice, suggesting that ovulation, gestation, or female reproductive behavior specifically depends on Ndst-dependent HS sulfation in cells types that express Cre under Pcp2/L7 promotor control. View Full-Text
Keywords: Purkinje cell; heparan sulfate; extracellular matrix; knockout mouse; Ndst Purkinje cell; heparan sulfate; extracellular matrix; knockout mouse; Ndst
►▼ Show Figures 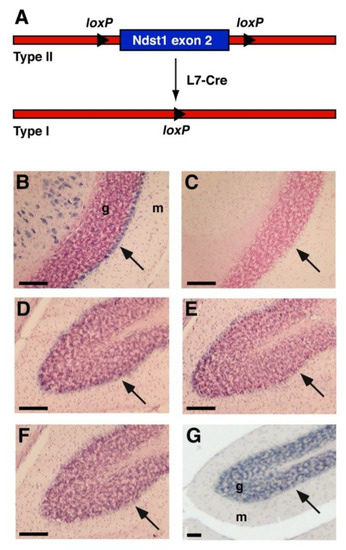