Spindly was originally identified as a specific regulator of Dynein activity at the kinetochore. In early prometaphase, Spindly recruits the Dynein/Dynactin complex, promoting the establishment of stable kinetochore-microtubule interactions and progression into anaphase. While details of Spindly function in mitosis have been worked out in cultured human cells and in the C. elegans zygote, the function of Spindly within the context of an organism has not yet been addressed. Here, we present loss- and gain-of-function studies of Spindly using transgenic RNAi in Drosophila. Knock-down of Spindly in the female germ line results in mitotic arrest during embryonic cleavage divisions. We investigated the requirements of Spindly protein domains for its localisation and function, and found that the carboxy-terminal region controls Spindly localisation in a cell-type specific manner. Overexpression of Spindly in the female germ line is embryonic lethal and results in altered egg morphology. To determine whether Spindly plays a role in post-mitotic cells, we altered Spindly protein levels in migrating cells and found that ovarian border cell migration is sensitive to the levels of Spindly protein. Our study uncovers novel functions of Spindly and a differential, functional requirement for its carboxy-terminal region in Drosophila. View Full-Text
Keywords: Drosophila; mitosis; cell migration; mitotic spindle; Dynein Drosophila; mitosis; cell migration; mitotic spindle; Dynein
►▼ Show Figures 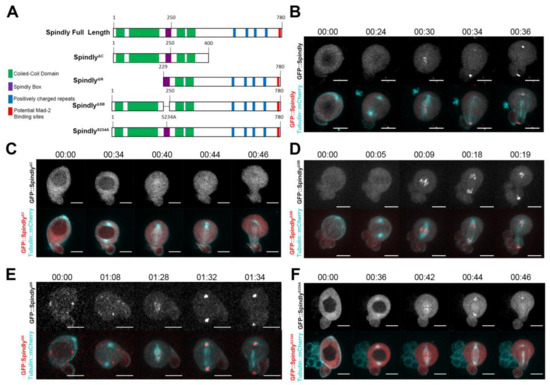