Molecularly Imprinted Polymer (MIP) has a specific cavity in which the conformity of shape, size, and functionalities corresponds with its template molecule and has been widely used in separation processes. Therefore, this study aims to examine the application of MIP for the purification of andrographolide. The MIP was synthesized by precipitation polymerization using methacrylic acid (MAA) and ethylene glycol dimethacrylate (EGDMA) as the functional monomer and cross-linker, andrographolide as a template, and acetonitrile:toluene (3:1) as porogen solvent. The results showed that the binding capacity of Synthesized MIP was 1.2486 mg/g, while the particle size was 295.5 nm with a polydispersity index of 0.064. Furthermore, the imprinting and selectivity factors were 1.148 and 12.37, respectively. The purification process by MIP increased the purity from 55.37 ± 0.69 to 94.94% ± 0.34, while the isolate characterization showed that purified andrographolide had a similar character compared to the standard.
Keywords: andrographolide; molecularly imprinted polymer; precipitation polymerization andrographolide; molecularly imprinted polymer; precipitation polymerization

Andrographolide (Figure 1) is a major bioactive constituent of Andrographis paniculata (Acanthaceae) and has been designated as a prospective pharmaceutical entity. This Labdane diterpenoid lactone in traditional Chinese medicine is used as an immunostimulant, as well as for dyspepsia, blood purification, asthma, gonorrhea, piles, dysentery, influenza, gastric complaints, fever, diarrhea, pharyngotonsillitis, snake bite, myocardial ischemia, common cold, diabetes, respiratory tract infections, and jaundice [1]. Due to its important pharmacological activity, various studies which aim to obtain andrographolide in high purity have been investigated. Several isolation methods involving numerous recrystallizations steps as purification methods have been reported [2,3,4]. However, the purification of crude andrographolide by MIP has not been carried out previously. Considering that MIP is widely used as a sorbent in separation methods such as solid-phase extraction (SPE), namely molecularly imprinted solid-phase extraction (MISPE) and chromatography, the use of MIP in the isolation purification step might simplify the process.
Molecularly imprinted polymers (MIP) are synthetic polymers characterized by selective cavities for certain groups of structurally related molecules [5]. It is synthesized by free radical polymerization and the sol-gel process. Bulk polymerization was the first free radical method used to prepare MIP, but it has several drawbacks, such as, requiring grinding and sieving as post-treatment leads to multiple binding sites, time-consuming, varying size and shape, as well as deeply embedded recognition sites which decrease the accessibility of target molecules. Other methods have been developed to overcome these drawbacks, namely suspension, precipitation, and polymerization in heterogeneous systems [6,7,8,9,10]. However, the utilization of emulsifiers in suspension and dispersion processes which are adsorbed on the surface particles, interferes with the desired target selective recognition and binding molecule. Therefore, the polymerization process without an attractive and suitable emulsifier was developed for generating MIP particles. Precipitation polymerization involves homogeneous nucleation in MIP particles formation. Initially, all components were mixed, while the critical chain lengths insoluble in the continuous phase were grown after polymerization to form particles and precipitate [7,11,12,13,14,15,16].
MIP has been used in several fields, such as drug delivery with specific targets [16,17,18,19,20], separation of related molecules and food adulterants in chromatography, industrial safety, and environmental analysis or separation [16,21,22]. It is also employed in the purification of biological, chemical reagents, and natural products [16,23,24,25,26,27]; therefore, in this study, MIP prepared using andrographolide as a template molecule was used for the purification. The application of MIP in the andrographolide isolation process is expected to speed up the purification process that was previously carried out by recrystallization, which usually takes days.

MIP was synthesized by the precipitation polymerization method adopted by Krishnan et al. [23]. A measure of 0.3 mmol andrographolide and 0.9 mmol methacrylic acid (MAA) were dissolved in 50 mL of acetonitrile with a toluene mixture of 3:1 and sonicated for 5 min 6 mmol of ethylene glycol dimethacrylate (EGDMA) and 20 mg of benzoyl peroxide were then added to the mixture and sonicated for 40 min. The final mixture was sealed and placed in the oven at 70 °C for 24 h. In contrast, non-MIP (NIP) was synthesized similarly without andrographolide addition; after 24 h, the precipitate was separated by centrifugation at 4000 rpm for 40 min. MIP was sonicated with methanol: acetic acid (9:1 v/v) to remove the template, followed by methanol and water to remove another reagent. The process was repeated until there were no andrographolide peaks in spectrophotometry UV-Vis spectrum and HPLC chromatogram. Then, the synthesized polymer was dried at 60 °C for 16 h.

The surface morphology of MIP and NIP was assessed using SEM, and the sample to be analyzed was placed on a double side metal plate and then gold-plated under vacuum. The scanning process was carried out with a current of 60 mA and electric power of 15 V.

Determination of particle size and PI were carried out by dispersing a 0.25 mg sample in 5 mL of water and inserted into the PSA instrument at a temperature of 25 °C.

2.1.4. Characterization of MIP and NIP by Fourier Transform Infrared (FTIR)

The synthesized polymer was characterized using FTIR ATR Zn-Se at a wave number of 400–4000 cm−1. Then, the MIP and NIP FTIR spectrums were compared with the spectrum of constituent components.

Then, 20 mg of polymer were shaken with 5 mL of various concentrations ranging from 20–60 ppm andrographolide solution for 3 h and was left for 24 h. The residue and filtrate were separated by centrifugation at 4000 rpm for 40 min, while HPLC was used to determine the concentration of andrographolide left in the solution. The data were used to obtain the fit model of Freundlich, Langmuir, Temkin, and Henry.

The reuse ability of MIP was evaluated by treating it with several isotherm adsorption cycles and template removal cycles with methanol:water (9:1). The adsorption capacity of MIP and NIP at each cycle was determined and tabulated into a graph.

The procedure of purification andrographolide methanolilc extract was as follows, a 5 g extract, 100 mL methanol, and 5 g of MIP were shaken at 240 rpm for 2 h, and then separated by centrifugation. The residue was washed with hot water and cold methanol, then separated by centrifugation, while 25 mL of methanol at room temperature was used to wash the residue 3 times. After centrifugation, the filtrate was evaporated, and the white crystal of andrographolide isolate was collected for further characterization. The purity of purified andrographolide was calculated by Equation (4). Further, purified andrographolide was characterized by FTIR, Spectro-photometry UV-Vis, melting point, and HPLC.
AUC was area under curve, while C (mg/L) is the concentration of sample and standard.

3.2. Characterization of MIP and NIP by SEM

SEM analysis is an important morphological study for polymer particles that provides an idea about the shape and size. Figure 4 indicates that spherical particles are produced with the size of nanometers. This is because the polymer particles were synthesized by precipitation polymerization. According to Tamayo et al., the uniform size of imprinted polymers can be formed using a noncovalent imprinting approach by precipitation polymerization [33,34].

The result of particle size determination is shown in Table 1. MIP had a smaller size than NIP. It can be caused by the presence of a template molecule in MIP, which influences MIP particle growth in the polymerization step [35,36,37]. This evaluation also provided size distribution data of MIP and NIP, which is depicted in Figure 5. From this figure, we could find out that MIP had wider size distribution than NIP.

3.4. Characterization MIP and NIP by FTIR

FTIR cannot be used for confirmation of hydrogen interactions between templates and functional monomers. It is also stated by other researchers, such as Hasanah, 2019 [35], Zhi, 2018 [38]. FTIR MIP and NIP characterization with FTIR was used to determine the functional group present in the polymer. The FTIR spectrum provided information about changes in the functional group of the components before and after the synthesis process. A spectrum of EGDMA (cross-linker) and MAA (methacrylic acid) differed from MIP and NIP. The disappearance of the peak at about 1600 cm−1, 1600–1635 cm−1, 990 ± 5 cm−1, and 910 ± 5 cm−1 due to the cleavage of the double bond during the polymerization process indicated the success of the synthesis process. Figure 6 shows the functional group of MIP and NIP compared to the monomer and cross-linker.

The adsorption capacity of MIP decreased approximately 12% in the second cycle and significantly in the third to fifth cycles. The graph in Figure 7 shows that MIP could be used two times without significantly reducing the adsorption capacity. The significant decrease is presumably due to residual andrographolide, which still remains in the polymer (MIP and NIP) that can be observed in the FTIR spectrum of polymer before and after five cycles (Figure 8).

3.8. Application of MIP for Andrographolide Purification

Synthesized MIP has a spherical shape and smaller size compared to NIP, as well as better adsorption capacity, along with imprinting and selectivity factors. The application in the purification of andrographolide methanolic extract increased the purity, while the characterization of an isolate from this purification process showed similarity with the standard, indicating that MIP can be used to purify andrographolide.

This research received financial support from P3MI Bandung Institute of Technology in 2019.

All data generated during this study are included in the article.

We would like to appreciate P3MI Bandung Institute of Technology for the financial support. 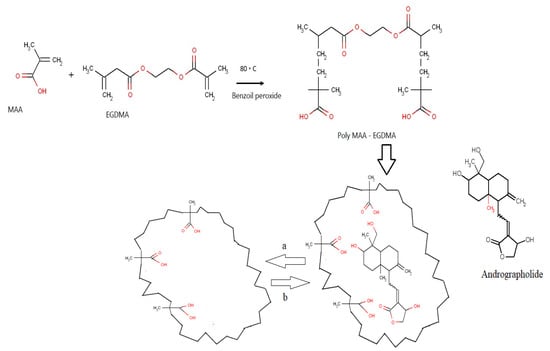 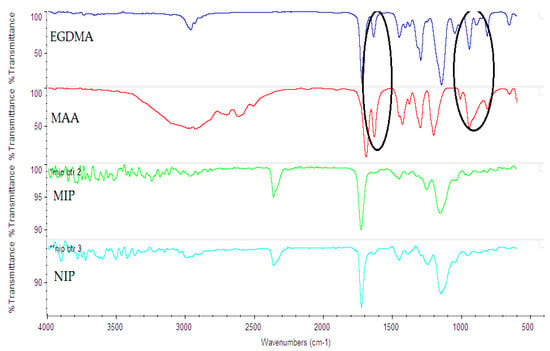 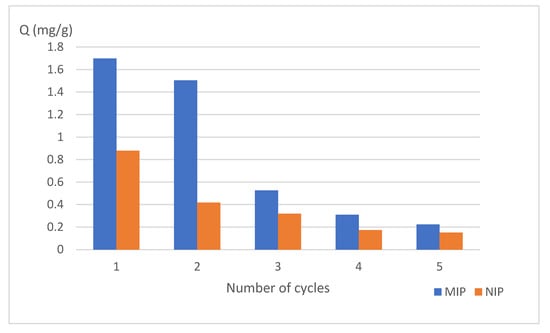 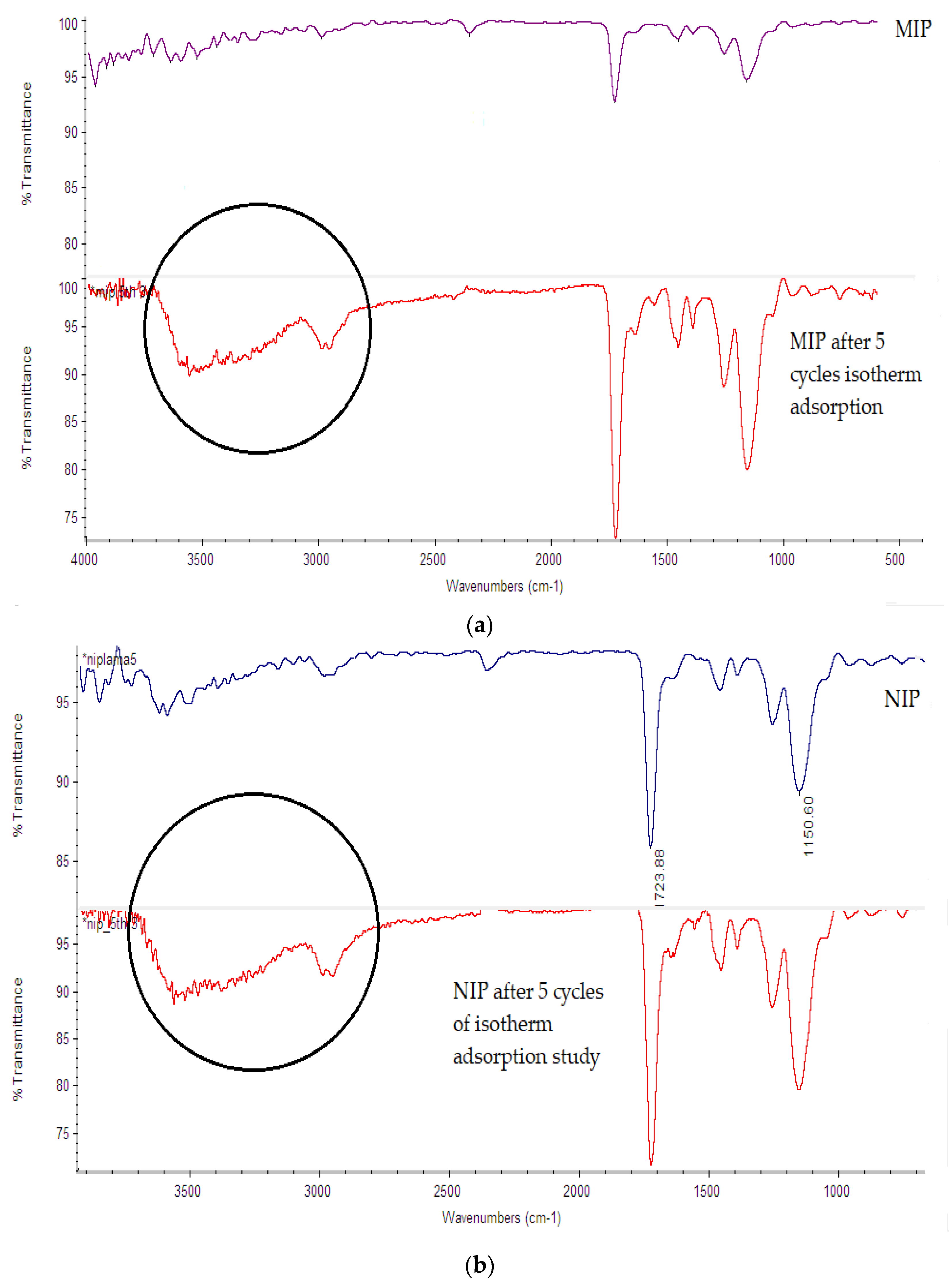 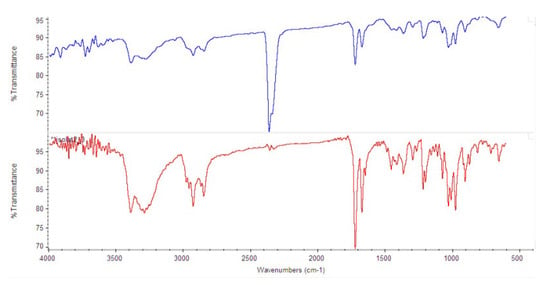 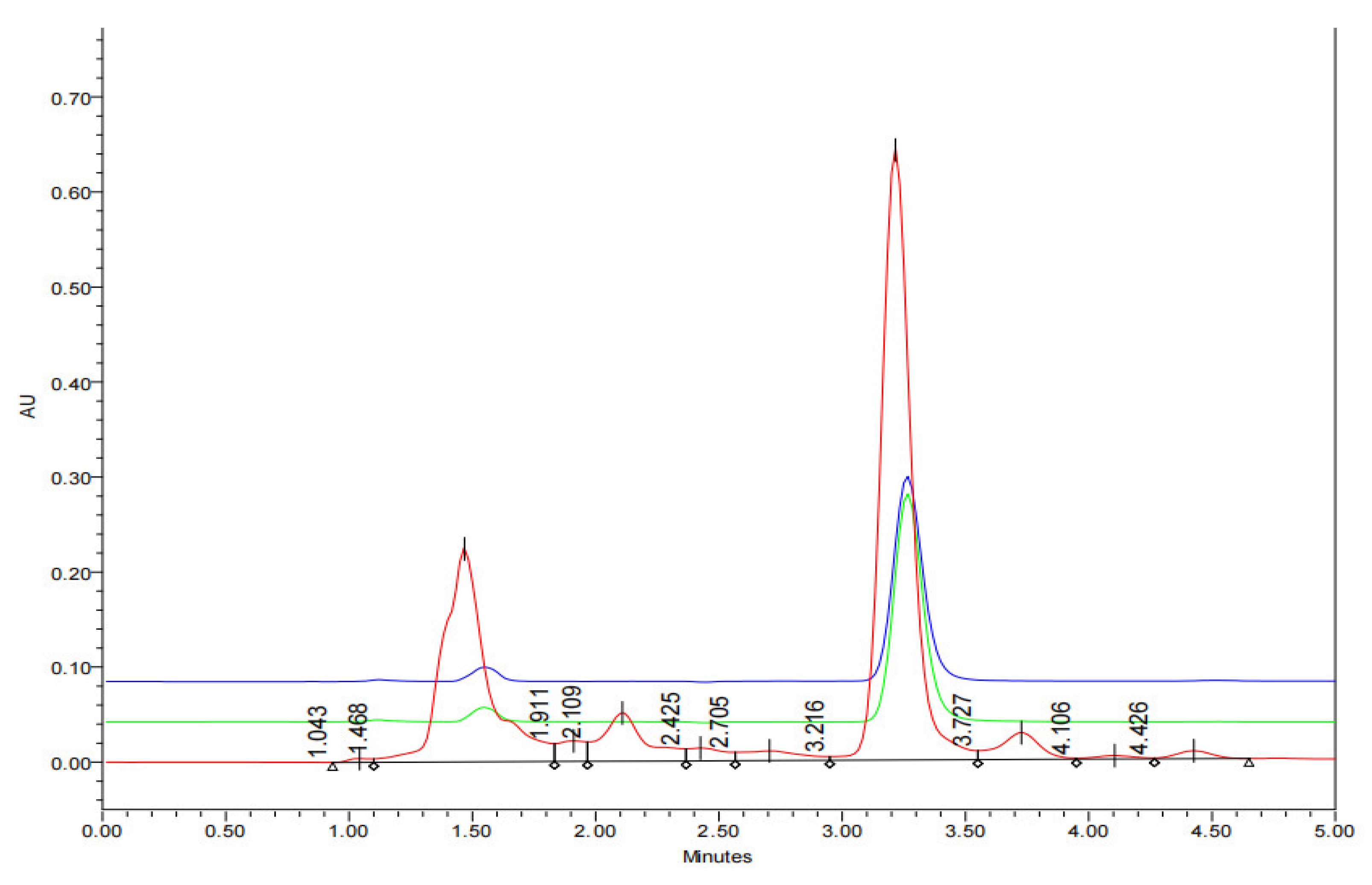 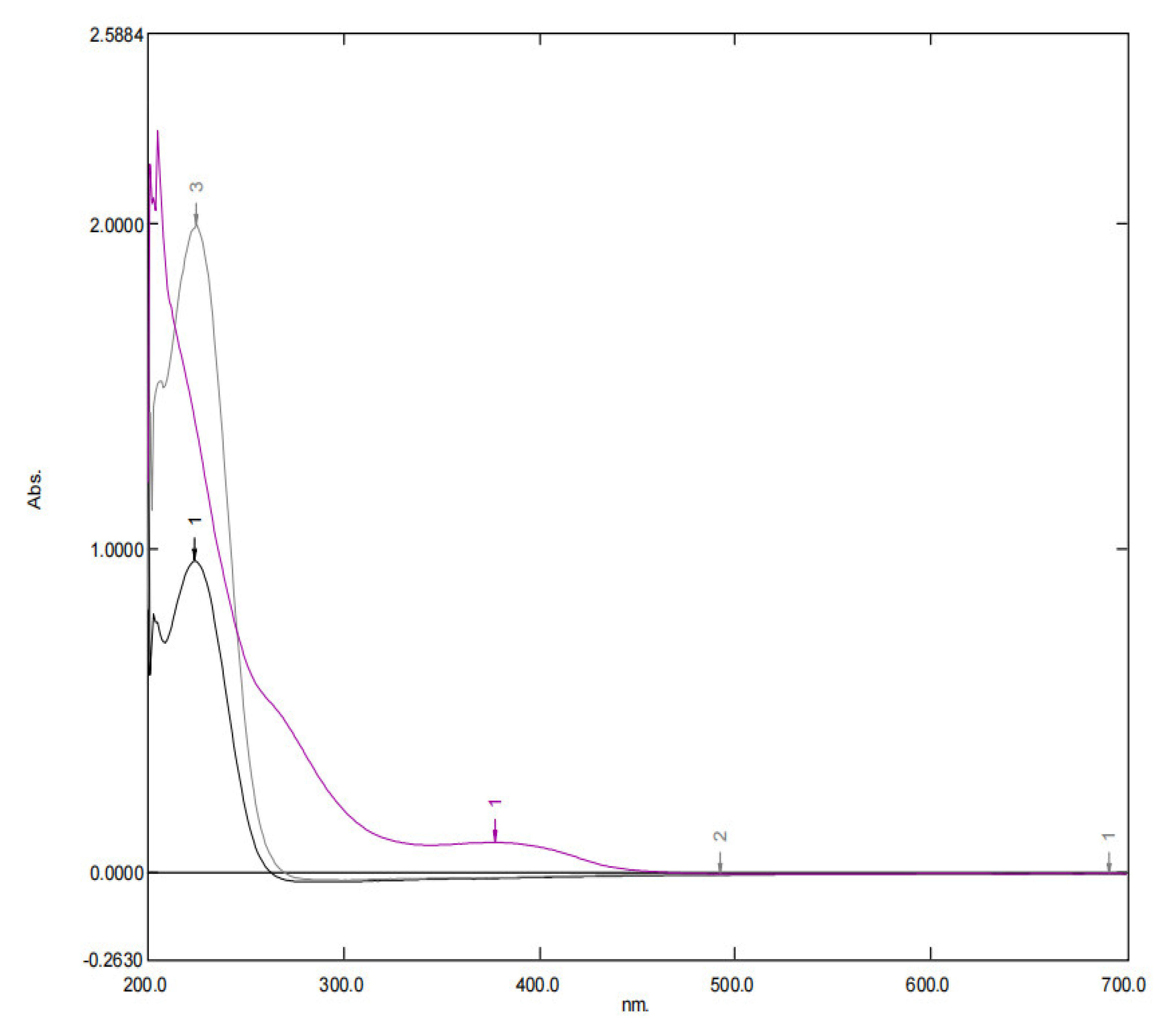