The Vascular Factor Plays the Main Role in the Cause of Pain in Men with Chronic Prostatitis and Chronic Pelvic Pain Syndrome: The Results of Clinical Trial on Thermobalancing Therapy
Previous Article in Journal

Both osteoporosis (OP) and cardiovascular (CV) disease are relevant public health problems, leading to increased morbidity and mortality as well as elevated clinical and economic burden [1]. Recent data suggest the relationship between osteoporosis and CV disease through mechanisms that have not been fully elucidated, but are likely related to common risk factors, common pathophysiological mechanisms, or both [1]. Bone health markers (BHM) showed correlation with biomarkers of subclinical atherosclerotic manifestation, CV risk factors and events [1]. In particular, osteocalcin (OC), a bone matrix protein produced by osteoblasts, has been investigated as a hormone affecting glucose metabolism and fat mass [2]. Moreover, several evidences suggest the relationship between low 25-hydroxyvitamin D (25(OH)D) and different cardiovascular determinants, particularly aging, hypertension, diabetes, obesity, and metabolic syndrome [3,4,5]. Low 25(OH)D has been related to higher CV risk and CV and overall mortality through meta-analysis studies [6,7].
In recent years, different scales—including the PROCAM and the FRAMINGHAM (FRS)—have been developed to estimate the 5–10-year risk in asymptomatic population [8,9]. However, BHM have never been evaluated according to global risk.
Thus, the aim of the present study is to evaluate the associations between biochemical BHM, individual CV risk factors, and CV risk scores in a general adult population.

The study included a general population of 103 subjects (21 males; mean age (SD): 56 (12) years) including adult volunteers and hospital outpatients of our Endocrinological Ambulatory in Pisa, Italy (latitude 43° N). At enrolment, each participant was interviewed about CV disease familiarity, clinical history, previous CV events, and lifestyle habits. Hypertension was defined if the average of recorded values was higher than 140/90 mmHg or in the presence of antihypertensive treatment. For each patient, body mass index (BMI) was calculated (obesity if BMI > 30 kg/m2). An altered lipid status was considered in the case of total cholesterol concentration ≥200 mg/dL (5.18 mmol/L), or triglyceride concentration ≥150 mg/dL (1.69 mmol/L), or current use of lipid-lowering drugs. Type 2 diabetes was defined if twice-fasting plasma glucose was >126 mg/dL (7 mmol/L) or in case of use of antidiabetic treatment. All subjects were free from acute or chronic inflammatory disease, significant renal impairment, immunological disease, and history or evidence of malignancy.
The FRS risk score predicts the 10-year risk of developing CV events, including coronary heart disease, stroke, peripheral artery disease, or heart failure. This sex-specific score considers age, total and high-density lipoprotein cholesterol, systolic blood pressure, treatment for hypertension, smoking, and diabetes. A score <10% is considered at low risk, 10–20% intermediate risk, and >20% high risk of CV events [8].
The PROCAM risk score considers age, LDL cholesterol, smoking, HDL cholesterol, systolic blood pressure, family history of premature myocardial infarction, diabetes mellitus, and triglycerides, in addition to previous coronary events [9]. A score lower than 10% is considered low, 10–20% intermediate, and higher than 20% as high for the 10-year risk of CV events.
We have complied with the World Medical Association Declaration of Helsinki regarding ethical conduct of research involving human subjects.

After an overnight fast, blood samples were drawn from the left antecubital vein, and centrifuged within 15 min after blood collection at 2500× g for 15 min at 4 °C. Serum samples were immediately stored at –80 °C for less than one week before subsequent analysis. 25(OH)D, OC, and bone alkaline phosphatase (BALP) were analyzed on an automated LIAISON (Diasorin, Salluggia, Vicenza, Italy), while procollagen type I N-terminal propeptide (P1NP) and C-terminal telopeptide (CTX) were also measured on a Cobas e411 analyzer (Roche Elecsys, Indianapolis, IN, USA) [3,10]. As we previously observed, 25(OH)D samples were extremely stable for light, temperature, and storage, without requiring special transport or precautions [3]. 25(OH)D was scored according to daylight saving time (DST), which is the is the practice of setting the clocks forward 1 hour from standard time during the summer months, and back again in the fall. Hemolyzed samples were excluded and withdrawal was repeated, as OC may decrease with hemolysis [10].
In addition, glycemia (fluoride-containing tubes), insulin (INS), lipid profile (total cholesterol, TotCH; triglycerides, TG; high density lipoproteins, HDL), and hsC-reactive protein (CRP, serum) were measured with a standard clinical chemistry laboratory analyzer (UniCel DxC 600 Chemistry Analyzer, Beckman, Brea, CA, USA). Levels of low-density lipoproteins (LDL) were calculated with the Friedewald equation.

Continuous variables with little-to-mild skewness were summarized as means ± SD, while data were expressed as medians (min-max) for variables with a skewed distribution, or percentages for categorical variables. Comparisons were made by means of the two-sample Student’s t-test for continuous variables and by Chi-square analysis for categorical variables. Comparisons among different groups were performed by using ANOVA test and p for trend reported. Regression analysis with Pearson’s test was also used to evaluate the relationship between the two continuous variables.
Owing to skewness, log transformations of glycemia, INS, TG, OC, CTx, and CRP were used for statistical analyses. Then, log-transformed values were back-transformed for data presentation.
Univariate predictors with a p value ≤ 0.5 were entered into a multivariate regression analysis (BHM as the dependent variables, and significant parameters as the independent variables to determine independent predictors for each BHM). Additionally, a logistic regression analysis was used to estimate the independent association among BHM with the composite scores (FRS, PROCAM), after adjusting for potential confounders that were not part of the scores (CRP and obesity), but can increase CV risk and may be related to BHM.
A p-value < 0.05 was chosen as the level of significance.

Demographic and clinical characteristics of the subject population, lifestyle factors, and risk score levels are reported in Table 1. The studied population included 103 subjects (21 males; mean age (SD): 56 (12) years). The whole population included 11 obese subjects and 19 current smokers, as well as 48 subjects with dyslipidemia, 30 with hypertension, and 10 with Type 2 diabetes.
According to the baseline cardiovascular risk estimation, 86 subjects (84%) were classified as low risk, and 17 (16%) as intermediate risk with regard to FRS. Risk group distribution according to PROCAM was 85 (82%), 15 (15%), and 3 (3%) for the low-, intermediate-, and high-risk groups, respectively.

3.3.5. Logistic Analysis for FRS and PROCAM

As we go further into bone and CV physiology, it is evident that a close relationship exists between these conditions. Further studies are needed to investigate potential mechanisms by which bone turnover markers are related to metabolic risk and could modulate CV risk. From an holistic perspective, it is conceivable that patients affected by OP likely benefit from CV evaluation, whereas patients with CV disease would benefit from bone health assessment. Moreover, it will be also interesting to understand how common biological and molecular factors may drive the progression towards a certain pathology and explain why a subject will develop one specific disease rather than another. 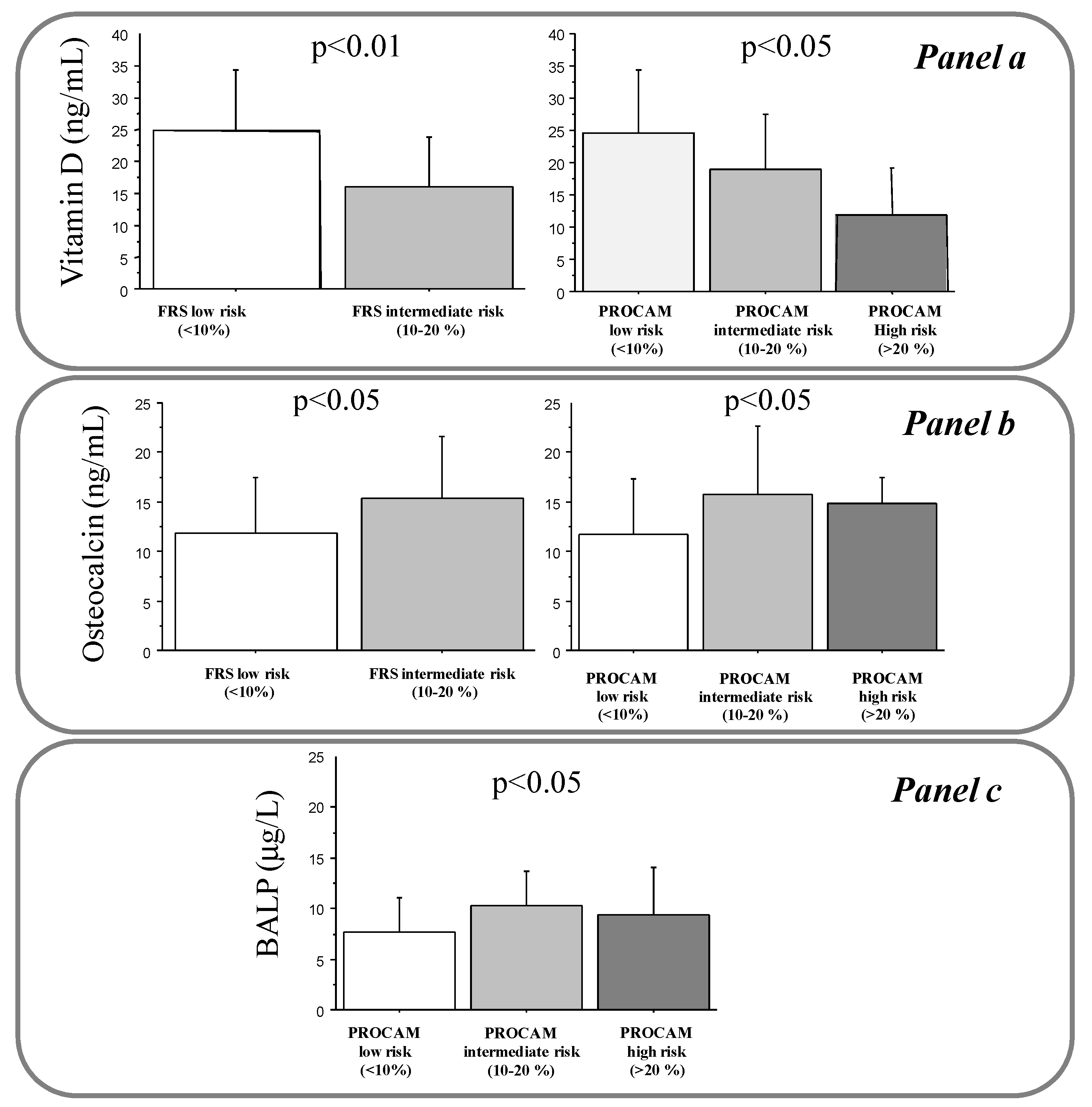