Paper-Based Assessment of the Effects of Aging on Response Time: A Diffusion Model Analysis
Next Article in Special Issue

Specific Abilities in the Workplace: More Important Than g?
Previous Article in Journal

Human Capital and Reemployment Success: The Role of Cognitive Abilities and Personality

Socio-Demographic Indicators, Intelligence, and Locus of Control as Predictors of Adult Financial Well-Being

Financial well-being as a research topic has drawn interests not only for financial planners, economists, sociologists, and policy makers, but also for psychologists. The different disciplines emphasise different factors that lead to financial status in adulthood. This study aims to investigate a set of socio-demographic factors (parental social status, education and occupation) as well as psychological factors (intelligence, self-esteem, locus of control, malaise) that influence adult financial well-being indicated by weekly net income, house ownership status, and living space (number of rooms). The study had a large, nationally representative sample in the UK, and had a particular focus on psychological factors (intelligence, locus of control, malaise) and the extent to which they independently predict adult financial well-being.
Previous studies have established findings on the links between family background, childhood intelligence and later educational and occupational outcomes [1,2,3,4,5,6,7,8,9,10,11,12], between childhood cognitive development and adulthood socioeconomic status and mental health [13,14] using a large American sample showed that each IQ test point raises income by between $234 and $616 per year after holding numerous other factors constant.
However, few studies have examined the effects of locus of control, intelligence, and mental health on adult financial well-being. Many studies have demonstrated the predictive power of locus of control with respect to many life outcome variables including health and financial well-being [15,16,17] showed locus of control, measured at age 10 years predicted social class at age 30 years. Locus of control has been linked to attitudes and behaviour with respect to money [18,19]. Those with internal locus of control tend to be more strongly motivated to exercise plan and take responsibility for their actions.
There is also a literature on personality and occupational and financial success which suggests particular personality variables, namely Conscientiousness positively and Neuroticism negatively are related to career success [20,21]. In this study we examine the effect of early adult Malaise (a strong correlate of Neuroticism) on mid adult financial success. Longitudinal studies have shown that early indicators of instability/malaise are negatively linked to educational and occupational outcomes [17]. We also examined self-esteem measured at aged 10 which has been shown to be related to a number of variables like external locus of control and educational attainment.
The current study has three strengths: it examined a set of inter-correlated social and psychological factors together determining to what extent each factor influenced the outcome variable; it used a large, nationally representative longitudinal dataset; and it used a set of financial well-being measures (earnings, house ownership status, living space), thus covering more than one components of the concept of financial well-being.
Gender pay gap is well documented [22], though explanations vary. Women in almost every social sectors have less earnings than men. However, the discrepancy of pay between men and women seems to decrease in some developed countries. For example, in the UK, when full-time work is taken in isolation, women earn 10 per cent less than men in 2013. It means the gap between men and women’s full-time earnings has now almost halved since records began in 1997 [22].
There have been numerous studies on the possible causes of the established gender difference in pay which include gender differences in education, hours worked, occupational prestige, employment sector and years in the labour market [23,24,25]. Semykina and Linz (2007) [26] found gender differences in personality traits which explained 8% of the gender wage gap. They also found women’s earnings are strongly affected by personality while the effect of personality on men’s earnings was small and often not significant. Ashby and Schoon (2010) [27] found teenage career aspirations and ambition predicted adult social status and earnings but that the effect was slightly different between the sexes. This study considers the effects of cognitive and non-cognitive individual difference factors separately for males and females. It uses an archived data set that has been used to explore how early childhood factors predict socioeconomic outcomes in adulthood.

The study draws on a nationally representative cohort study: the 1970 British Cohort Study (BCS70). The study participants were recruited as part of a perinatal mortality survey (BCS70 comprises 16,571 individuals who were born in Great Britain in a week in April 1970 [28]. The following analysis is based on data collected at birth, age 10, age 16, age 30, age 34, and age 38. The analytic sample comprises 4790 cohort members (53 per cent females), for whom complete data were collected at birth and the follow-ups at age 38 years. Analysis of response bias in the cohort data showed that the achieved adult samples did not differ from their target sample across a number of critical variables (social class, parental education and gender), despite a slight under-representation of the most disadvantaged groups [29].

(1)
Family social background includes information on parental social class and parental education. Parental social class at birth was measured by the Registrar General’s measure of social class (RGSC). RGSC is defined according to occupational status [30]. Where the father was absent, the social class (RGSC) of the mother’s father was used. RGSC was coded on a 6-point scale: I professional; II managerial/technical; IIIN skilled non-manual; IIIM skilled manual; IV semi-skilled; and V unskilled occupations [31]. Scores were reversed. Parental education is measured by the age parents had left their full-time education.
(2)
Childhood Intelligence was assessed at age 10 in school using assessed in school, using a modified version of the British Ability Scales (BAS) which can serve as a measure for childhood IQ. The assessment involved the administration of four sub-scales: word definitions and word similarities which were used to measure verbal ability, and recall of digits and matrices which were used to measure non-verbal ability. The alpha for the four measures combined into a total scale was .92.
(3)
Self-esteem was measured at age 10. Cohort members completed a 12-item Self-esteem Scale (Yes/No) [32,33]. The alpha was .73.
(4)
Locus of Control was measured at age 16. Cohort members completed a 19-item Locus of Control Scale (Yes/No) [34]. The alpha was .72.
(5)
Malaise Inventory is a 24-item self-completion instrument, measuring depression, anxiety and psychosomatic illness [35] and it correlates significantly with previously diagnosed and currently treated depression. The alpha was .81.
(6)
Educational Qualifications was assessed at age 34, participants were asked about their highest academic or vocational qualifications. Responses are coded to the six-point scale of National Vocational Qualifications levels (NVQ) which ranges from ‘none’ to ‘university degree/higher’/equivalent NVQ 5 or 6.
(7)
Occupational Prestige was measured at age 38. Current or last occupation held by cohort members were coded according to the Registrar General’s Classification of Occupations (RGSC), described above, using a 6-point classification mentioned above.
(8)
Adult Financial Well-being is a latent variable indicated by weekly income, house ownership status, and living space (number of rooms) measured at age 38. Participants were asked about their current net payment per week (incomes were logged in the following analyses), number of rooms; and their house ownership status (1 = Live rent-free, 2 = Rent it, 3 = Buying with help of mortgage, 4 = Outright own).

First, we examined the mean differences of the three financial well-being indicators by sex. ANOVA showed that there was a sex difference on income which indicated women compared to men were less well paid (F(1,4788) = 740.32, p < .001). There were no sex differences for number of rooms and home ownership.

Structural Equation Modelling (SEM) was used to assess the links among family social status, childhood intelligence and self-esteem, locus of control at teen, malaise, educational qualifications and occupational prestige, and current financial well-being. Paths in the models are designed to correspond with the time sequence in which the variables occurred as well as according to the literature in the area. The SEM model testing was carried out using the structural equation modelling program IBM AMOS 22 [36] using maximum likelihood estimation that can be based on incomplete data, known as the full information maximum likelihood (FIML) approach [37].
Figure 1 and Figure 2 show the standardised path coefficients of the structural equation models for men and women respectively. The solid lines indicate that the corresponding path coefficients are statistically significant and dashed lines indicate that the path coefficients are non-significant. Error variance for each observable variables and latent variables are included in the model (not shown in the diagrams).

We thank the UK Data Archive, University of Essex, for providing the data. The original data creators, depositors or copyright holders, the funding agencies, and the UK Data Archive bear no responsibility for the analyses and interpretation presented here. 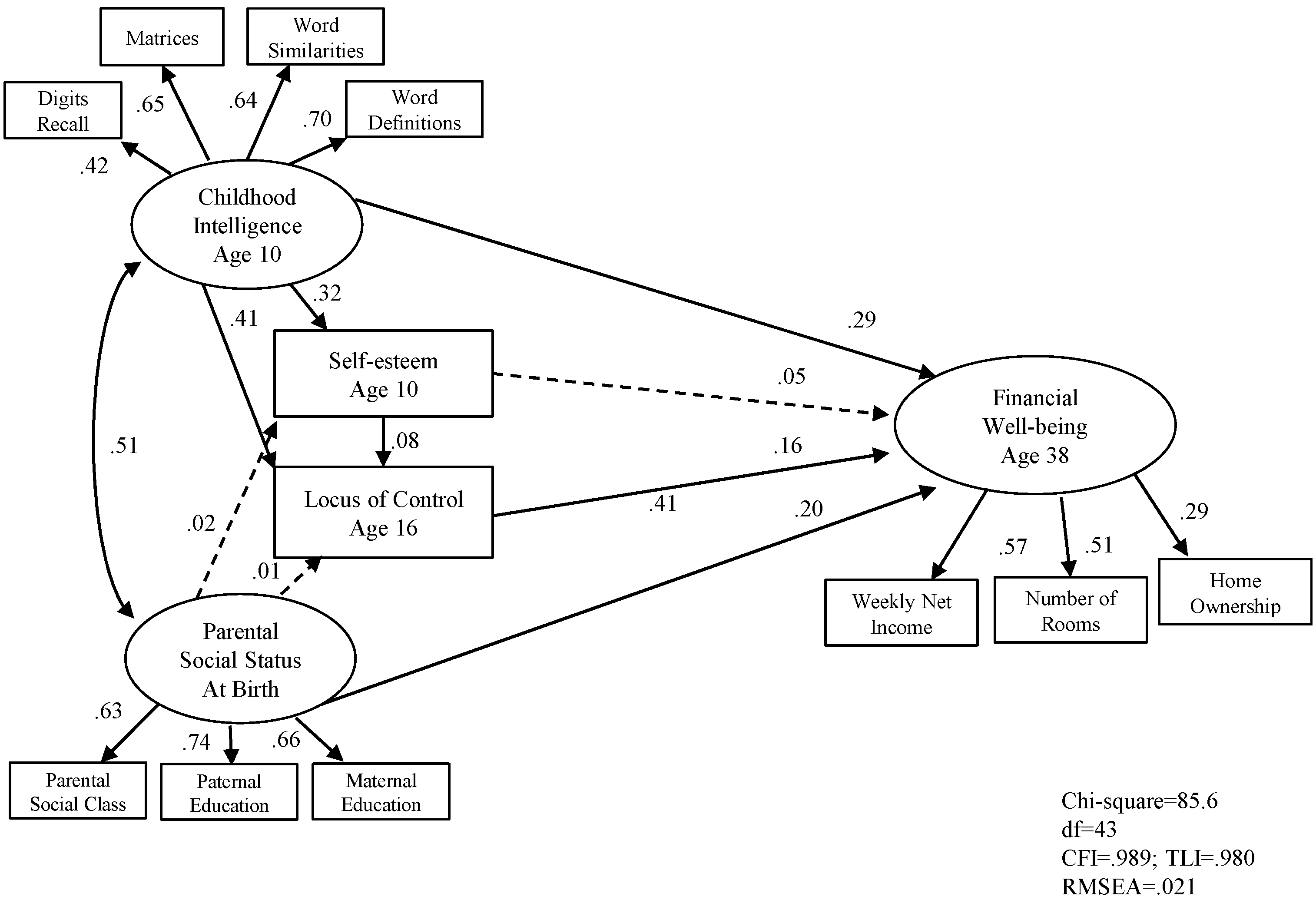 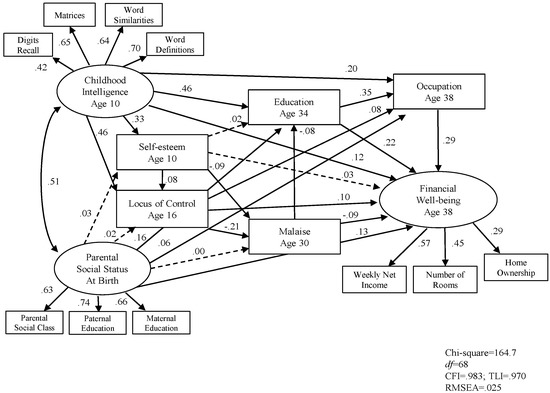 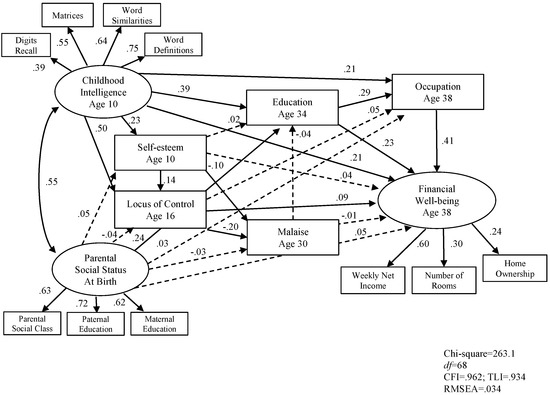 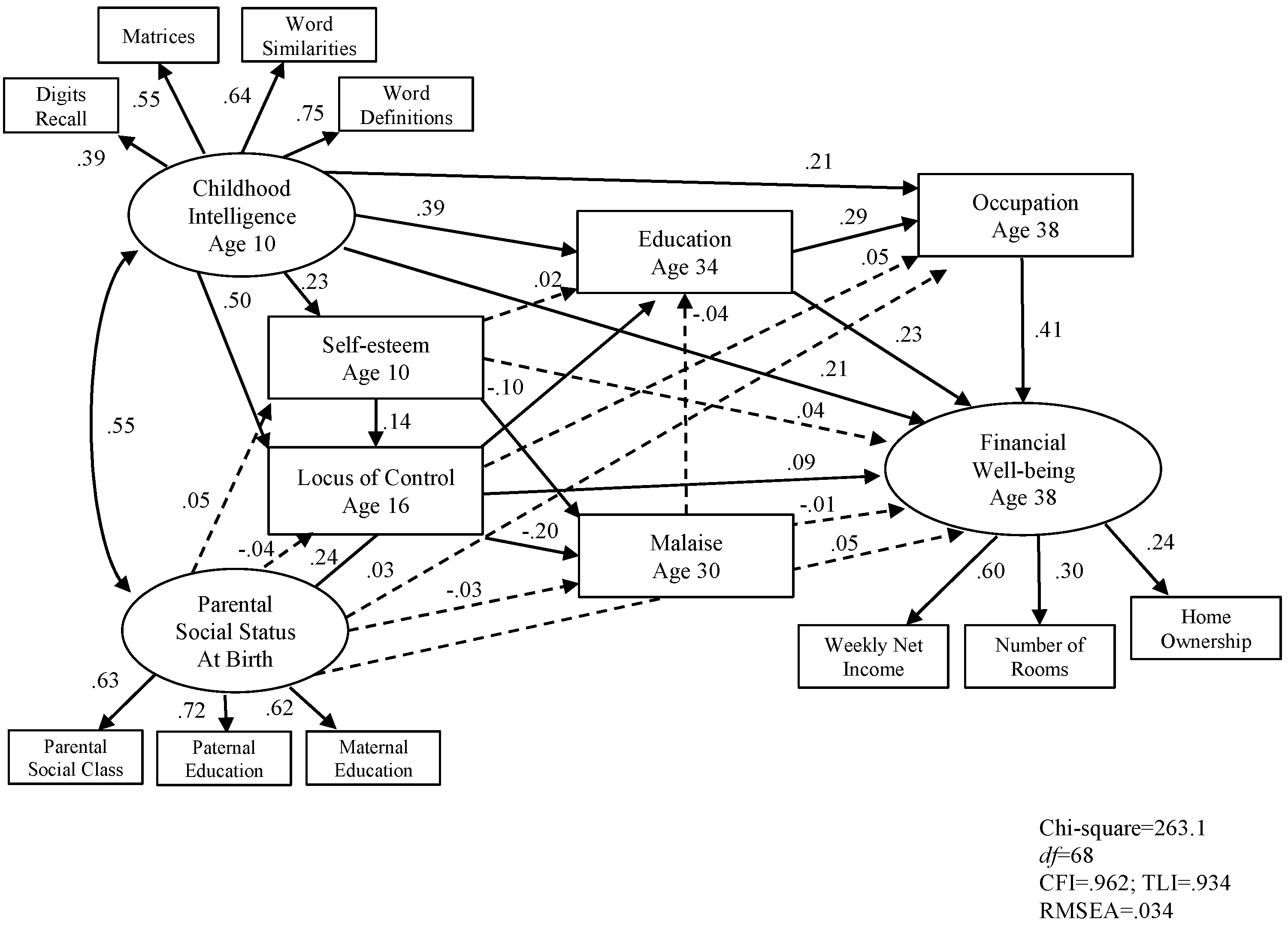