The 16th International Conference on Density Functional Theory and its Applications belonged to the series of biennial meetings, which had taken place in Paris (1995), Vienna (1997), Rome (1999), Madrid (2001), Brussels (2003), Geneva (2005), Amsterdam (2007), Lyon (2009), Athens (2011) and Durham (2013). In 2015 (between 31 August and 4 September), the density functional theory (DFT) conference was held in Debrecen, the second largest town of Hungary (Figure 1).
In this context, it is appropriate to mention that Hungary has a long tradition in DFT. The preliminaries of this theory go back, among others, to Gombás and his work [1]. One member of his notable school was Gáspár, who established this research field in Debrecen. One of his papers [2] was the forerunner of the famous work of Kohn and Sham [3].
The conference in Debrecen celebrated the 50th anniversary of the Kohn–Sham theory. Nobel Prize winner Walter Kohn was the keynote speaker at many DFT meetings. Unfortunately, he could not participate in the Debrecen conference. Half a year ago, we received the very sad news that Walter Kohn had passed away. This is a great loss to the whole DFT community.

We start this Special Issue with an obituary for Walter Kohn [4] which summarizes his life, the outstanding scientist, and his pioneering concepts. He had a life story from tragedies to highlights. Walter Kohn was not only one of the most prominent scientists in this field but he was interested and active in many areas, such as art, literature, history, humanities or environmental issues. All colleagues will keep him in loving memory, due to his creative and critical thinking. He is deeply missed by his many friends.
The conference in Debrecen (http://dft2015.unideb.hu/home) had 180 participants from 36 countries (Figure 1). The 20 invited speakers addressed various topics, to which 14 contributed, and 26 short talks added new perspectives. In addition, many discussions took place around the shown 70 posters. There were presentations in memory of Tom Ziegler, the distinguished scientist, who died a couple of months before the conference. Several participants of the conference contributed to this Special Issue, which we briefly summarize here:
Darghouth et al. [5] used several methods to compute ionization potentials (IPs) and electron affinities (EAs), which are required for modeling organic solar cells. Organic electronics is a rapidly growing alternative to silicon-based electronics. They compare their semi-empirical density-functional tight-binding method with both, first principles GW (Green’s function, G; times the screened potential, W) calculations and experiments. Their simpler approach allows studying larger systems. The results are discussed in connection with ΔSCF and Koopmans’s theorem, commonly used schemes for IPs and EAs.
Tao et al. [6] calculated the refractive index of Si3N4 and derived various optical spectra, in particular the energy-loss function (ELF). The focus is on understanding the mechanism in Si-rich silicon nitride, for which they analyzed how ELF is affected by composition, microstructure or H in the bulk or at the surface.
Amovilli et al. [7] present a simple decomposition scheme of the Kohn–Sham optimized orbitals, which provides a reduced basis set designed for Quantum Monte Carlo calculations. This approach (based on Diffusion Monte Carlo calculations) allows the obtainment of a rather accurate energy. It is illustrated for selected systems leading to good results e.g., for barrier heights of a chemical reaction.
In the work of Tkachuk et al. [8] we can read how to simulate adsorption complexes of germanium on a Si surface. A clear correlation between the chemical shift and the arrangement of the Ge atoms is shown. In addition, the relation to the charge distribution in clusters is discussed.
Dharma-waranda [9] figures out several interesting current issues of finite temperature DFT and warm-correlated matter (WCM). Traditionally, the ion subsystem is treated as a passive external potential at T = 0. For finite T, however, another exchange-correlation functional must be constructed that depends on both the electron density and the ion density. A mapping of this complex system to a classical system is proposed in order to make such calculations feasible.
Constantin et al. [10] investigate the behavior of the kinetic and the exchange energy densities near the nuclear cusp of atomic systems. They propose non-local density-dependent ingredients that allow a proper description in this special region.
Civalleri et al. [11] emphasize the importance of a careful analysis when benchmarks for multiple properties are used. Some indicators are provided but they may still be insufficient.
Däne et al. [12] deal with the fundamental issue of the v-representability problem. They devise a formalism to test whether or not a wave function, which leads to a given density, corresponds to a solution of a Schrödinger equation for a potential v. Numerical examples check this formalism.
From the work of Tsuneda et al. [13] we can understand orbital energy-based reaction analysis theory as an extension of the orbital-based conceptual DFT. It is applied to several SN2 reactions, which are either driven by a structural change or through electron transfer between contributing orbitals. In their approach, the different behavior for such a reaction—either in gas phase or in aqueous solution—can be properly described.
There is a discussion by Karu et al. [14] of relative electrochemical stabilities, ionic charges and dynamic properties of ionic liquids in the light of their potential practical applications. For a set of 48 ionic pairs the properties for practical electrochemical applications were tested based on a combination of DFT data and informatics techniques using a computational workflow.
Juarez et al. [15] present simulations for the hydrogen interaction with bimetallic Au(Pd) and Au(Rh) systems with a DFT-based periodic approach. The reactivity of an Au surface towards hydrogen was related to the presence of dopants (Pd or Rh), showing both similarities and differences between them. Since the underlayer dopants affect the reactivity, there is the possibility that the gold surface properties can be tuned by the dopants.
Glushkov et al. [16] treat highly excited states by a time-independent DFT method with the constrained optimized effective potential (COEP) methodology. They propose Kohn–Sham-like equations for excited states and discuss the accuracy of their scheme for selected cases.
Sahni et al. [17] describe their work on the electron correlation in local effective potential theory. The Quantal-DFT is described and the important terms are discussed such as the Pauli principle, the Coulomb repulsion and Correlation-Kinetic effects.
Schmidt et al. [18] discuss the influence of one-electron self-interaction on d-electrons and analyze two variants of hybrid functionals. They are applied to study four diatomic molecules containing transition metals. In order to eliminate the self-interaction error, two schemes are studied comparing between global and local hybrid functionals. Both lead to a very similar density of states.
From the work of Acharya et al. [19] we can find several details of the recently proposed time-dependent DFT method (for strongly correlated materials), in which the exchange correlation kernel is derived from Dynamical Mean Field Theory (DMFT). The proposed kernels are tested for a one-band Hubbard model and a Mott insulator.

These papers clearly illustrate the importance of DFT for a fundamental understanding of the electronic structure of many materials. The conference combined many aspects of DFT from concepts to applications for atoms, molecules, liquids, solids, and surfaces, but also properties corresponding to the ground state or excited states, as well as finite temperature or time dependence. The presentations in this Special Issue make it clear how broad the area of DFT has become. Progress can only be made by combining ideas from experts in chemistry, physics, material science, mathematics, and computer science. The DFT conferences provide a forum for such important discussions.

We like to thank all authors, who have submitted their excellent papers to this Special Issue, and the many anonymous reviewers for their work. We are grateful to all staff members of MDPI for their support in organizing this Special Issue giving us the opportunity to publish it. 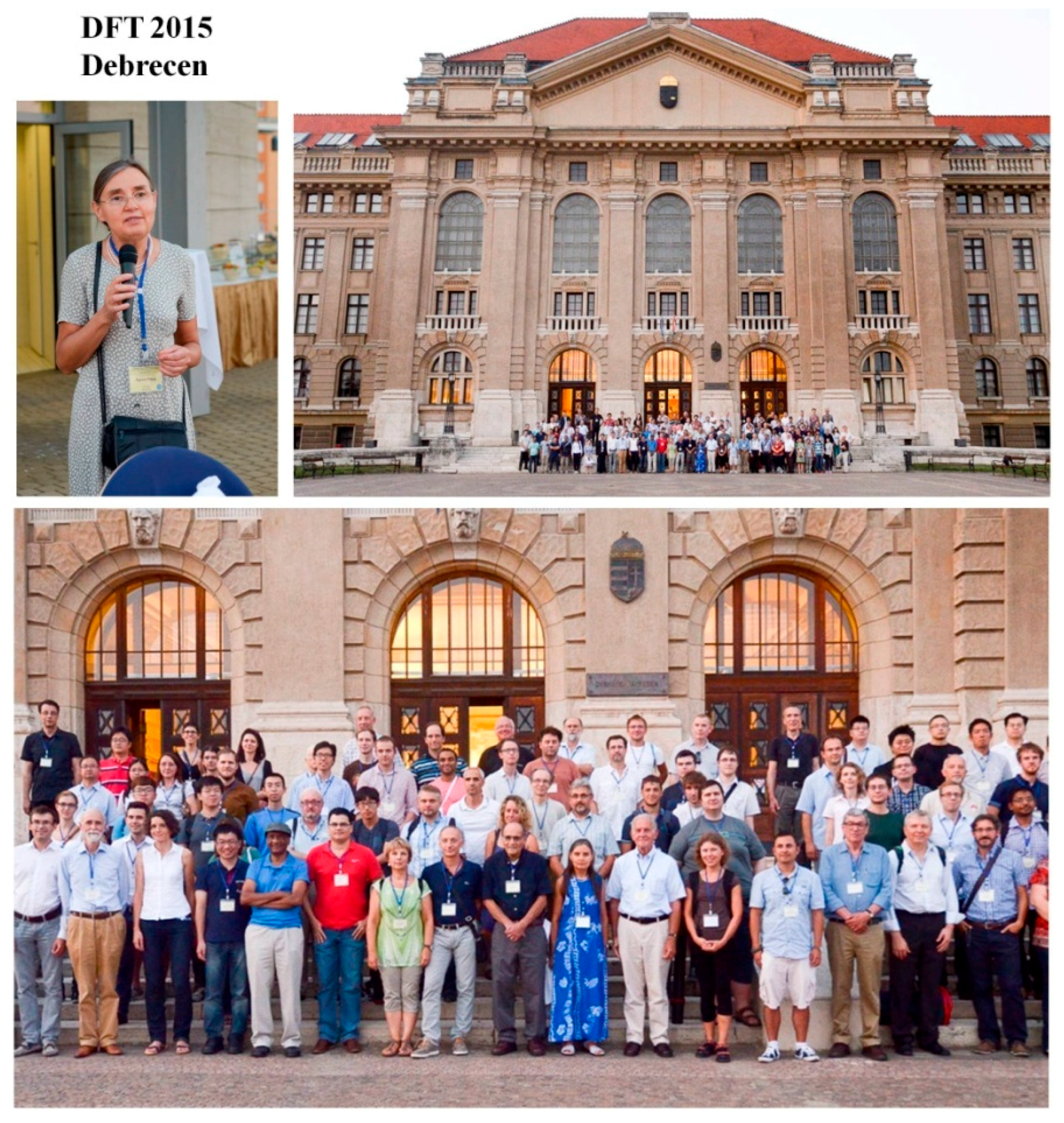