The New Indices of Religious Orientation Revised (NIROR): A Study among Canadian Adolescents Attending a Baptist Youth Mission and Service Event
Next Article in Special Issue

The National Congregations Study (NCS) is a survey of a nationally representative sample of religious congregations from across the religious spectrum, conducted in 1998, 2006, and 2012. In those years, the General Social Survey (GSS)—a well-known in-person survey of a nationally representative sample of non-institutionalized, English- or Spanish-speaking adults conducted by NORC at the University of Chicago [9]—asked respondents who said they attend religious services at least once a year where they worship. The congregations named by these people constitute a representative cross-section of American congregations. The NCS then contacted those congregations and interviewed someone, usually a clergyperson or other leader, about the congregation’s people, programs, and characteristics. Between the three waves of the NCS we now know about the demographics, leadership situation, worship life, programming, surrounding neighborhood, and more, of 3815 congregations.
The 2012 NCS (NCS-III) gathered data from 1331 congregations. The cooperation rate—the percentage of contacted congregations who agreed to participate—was 87%. The overall response rate, calculated in line with the RR3 response rate developed by the American Association for Public Opinion Research [10], but not taking account of the GSS’s own response rate, is between 73% and 78%. We report a range because the exact response rate depends on assumptions about the congregations associated with GSS respondents who declined to nominate a congregation after stating that they attended more than once a year.
The probability that a congregation appears in the NCS-III sample is proportional to its size: larger congregations are more likely to be in the sample than smaller congregations. Using weights to retain or undo this over-representation of larger congregations corresponds to viewing the data either from the perspective of attendees at the average congregation or from the perspective of the average congregation, without respect to its size. More information about this and other NCS methodological details is available elsewhere [11,12,13,14].

The 2012 NCS asked congregational informants, “Has your congregation participated in or supported social service, community development, or neighborhood organizing projects of any sort within the past 12 months?” Respondents were instructed to exclude any “projects that use or rent space in your building but have no other connection to your congregation.” Any numerical estimate of the extent of congregations’ social service activity depends on the exact way questions are asked and the extent of probing, and we know that more informal social service activities remain underreported without additional probing. Recognizing this, respondents who said “no” to this initial social services question were also asked, “Within the past 12 months, has your congregation engaged in any human service projects, outreach ministries, or other activities intended to help people who are not members of your congregation?” Congregations responding “yes” to either of these questions are considered to be engaged in social service activity of some sort.
In 2012, respondents who said “yes” to either of these questions were asked how many programs they sponsored or participated in within the last year. If they said four or fewer, they were asked to describe each program in an open-ended way. If they said more than four, they were asked to describe their four most important programs. The median number of programs reported was two for all congregations and three for congregations reporting some social service activity, with 73% of the latter reporting four or fewer programs. Five percent of congregations reported 15 or more distinct social service programs.
Interviewers were instructed to probe for each mentioned program’s purpose (up to four programs), and they recorded verbatim the descriptions offered by the respondent. These verbatim descriptions were coded into a set of non-mutually-exclusive variables, each one indicating a specified program characteristic or area. Substantively, these variables indicate congregational participation in a wide variety of arenas, including food, clothing, health, housing, disaster relief, domestic violence, prisons, employment, and immigration. Two coders independently coded each verbatim response, with disagreements resolved by a referee.
Congregations that mentioned social service activity were asked follow-up questions about how these activities were supported. For each program mentioned (up to four), informants were asked “whether it is a program or project completely run by your congregation, or whether it is a program that is run by or in collaboration with other groups or organizations.” Additional questions were asked regarding all of a congregation’s social service programs, not just its most important four: how much money was directly spent by the congregation on all of the programs, whether or not a staff person devoted at least 25% of his or her time in the past 12 months to these projects, whether the congregation received outside funds to support these activities, whether any outside funds came from government sources, and whether the congregation applied within the last two years for a government grant to support any of these activities. These items help us to assess the depth of congregational involvement in social services.
Two additional items in the NCS survey help assess congregational interest in social services: whether they have had a representative of a social service organization as a visiting speaker in the past year, and whether within the past year they had a group, meeting, class, or event to plan or conduct an assessment of community needs.
To assess differences across religious groups in social service activity, we use a modified version of a standard categorization [15] of congregations into five broad religious traditions: Roman Catholic, white liberal/mainline Protestant, white conservative/evangelical Protestant, black Protestant, and non-Christian congregations. These subgroups were constructed based primarily on denominational affiliations. Protestant congregations with at least 80% of the regularly participating adults of African or African American descent were placed in the black Protestant category, regardless of denomination. White Protestant congregations unaffiliated with any denomination were placed in the evangelical category.

Brad Fulton’s article in this volume [16] examines stability and change in congregations’ social service activity, so we will not say much about changes between 1998 and 2012. Still, we should mention two methodological details that are relevant for assessing change over time with these data.
First, the two-question strategy described above to identify congregations doing any social services is the same one used in the 2006 NCS, but different from the approach used in the 1998 NCS, when congregations were asked only the first of these questions. This means that assessing change since 1998 requires constructing 2006 and 2012 numbers that are comparable to 1998 numbers. This can be done by ignoring responses to the follow-up question and analytically treating the 2006 and 2012 congregations that said “no” to the initial question the same way they were treated in 1998.
Second, the 1998 and 2006 NCS surveys allowed congregations to name and describe all of their social service programs, with no limit. The 2012 NCS limited these descriptions to a congregation’s most important four programs. As noted above, even in 2012, questions about funding and staff support were asked with all congregational programs in mind, not just the most important four, so responses to those questions are in principle comparable over time, although interpretive caution still is advised since the context in which those questions were asked was not identical. Even more caution should be used when interpreting results implying change over time that are produced with information that was gathered about every program in 1998 and 2006 but only about the most important four programs in 2012. This includes information about specific program areas and information about collaborators. If, for example, a congregation’s fifth most important program was aimed at helping people get jobs, that congregation would be coded as having a jobs program in 1998 and 2006 but not in 2012. Researchers using these data to investigate change over time should keep these details in mind.

All things considered, a fairly clear and stable picture has emerged about the extent, nature, and limits of congregations’ social service activities. Most congregations focus primarily on their religious activities: worship services, religious education, and pastoral care for their own members. Virtually all also do something that can be considered social service, social ministry, or human service work. Some congregations do quite a lot of this, and a small percentage even receive government grants to support such work, but for the vast majority of congregations such activity remains a more peripheral, volunteer-driven part of what they do. Most congregational involvement in social service activity occurs in collaboration with other community organizations, and most activity is focused on meeting short-term, immediate needs, especially the need for food. The most typical, and important, form in which congregations engage in social services is by mobilizing small groups of volunteers to engage in well-defined and bounded tasks on a periodic basis.
Even though social service involvement is not their primary activity, congregations make impressive contributions in this arena. Few other organizations, aside from those whose express purpose is social service, conduct assessments of community needs and raise awareness of such to the same extent. The amount of time that paid staff and congregation-based volunteers devote to service outside the congregation itself are also significant contributions. This is the picture consistently painted by the NCS and by other research on congregations’ social services. Freed from the need to discern this picture’s implications for a politicized Faith-Based Initiative, we can more easily establish a common ground of knowledge and understanding about congregations’ social service work.

The NCS was made possible by major grants from the Lilly Endowment, Inc. The 2012 NCS also was supported by grants from the Pew Research Center’s Religion and Public Life Project, Louisville Institute, Center for the Study of Religion and American Culture at IUPUI, Rand Corporation, and Church Music Institute. The project also received generous support from Duke University and from the National Science Foundation via NSF support of the General Social Survey. Data were gathered by NORC at the University of Chicago. Shawna Anderson managed large portions of the project in the initial stages of data collection.

Mark Chaves is the principal investigator for the National Congregations Study. Alison Eagle is the project manager. Alison Eagle analyzed the data. Both authors contributed to the writing. 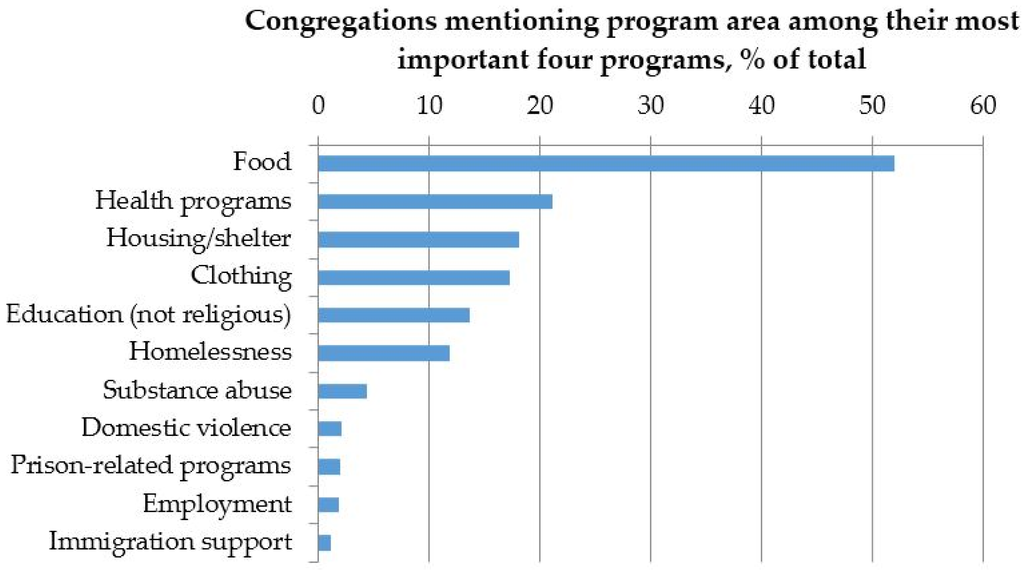