“‘But the Fountain Sprang Up and the Bird Sang Down’: Heidegger’s Gathering of the Fourfold and the Seven-Sacraments Font at Salle, Norfolk.”

My paper analyses the 15th-century seven-sacraments font at the medieval church of St Peter and St Paul at Salle in Norfolk (England). The church guides and gazetteers that describe the font, and the church in which it is situated, owe both their style and content to Art History, focusing as they do on their material and aesthetic dimensions. The guides also tend towards isolating the various elements of the font, and these in turn from the rest of the architectural elements, fittings and furniture of the church, as if they could be meaningfully experienced or interpreted as discrete entities, in isolation from one another. While none of the font descriptions can be faulted for being inaccurate, they can, as a result of these tendencies, be held insufficient, and not quite to the purpose. My analysis of the font, by means of Heidegger’s concept of Dwelling, does not separate the font either from the rest of the church, nor from other fonts, but acknowledges that it comes to be, and be seen as, what it is only when considered as standing in ‘myriad referential relations’ to other things, as well as to ourselves. This perspective has enabled me to draw out what it is about the font at Salle that can be experienced as not merely beautiful or interesting, but also as meaningful to those—believers and non-believers alike—who encounter it. By reconsidering the proper mode of perceiving and engaging with the font, we may spare it from being commodified, from becoming a unit in the standing reserve of cultural heritage, and in so doing, we, too, may be momentarily freed from our false identities as units of production and agents of consumption. The medieval fonts and churches of Norfolk are, I argue, not valuable as a result of their putative antiquarian qualities, but invaluable in their extending to us a possibility of dwelling—as mortals—on the earth—under the sky—before the divinities. View Full-Text
Keywords: sacred space; medieval churches; cultural heritage; sacred heritage; seven-sacraments fonts; phenomenology; ekphrasis; Heidegger; dwelling; the gathering of the fourfold sacred space; medieval churches; cultural heritage; sacred heritage; seven-sacraments fonts; phenomenology; ekphrasis; Heidegger; dwelling; the gathering of the fourfold
►▼ Show Figures 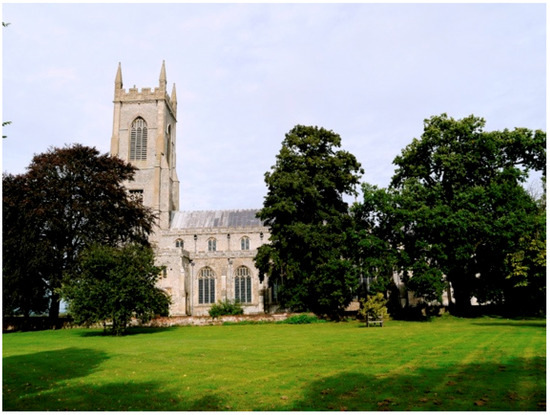