Where Would You Go? Race, Religion, and the Limits of Pastor Mental Health Care in Black and Latino Congregations
Next Article in Special Issue

The Renaissance Reception of Nahua Paideia in the Writings of Bernardino de Sahagún: An Aesthetic Approach to Religion
Previous Article in Journal

Aesthetics of Evil in Middle Ages: Beasts as Symbol of the Devil

From Mary’s Motherhood to the Immaculate Conception: An Iconographic Analysis of Marian Art in Spain during the Tenth to Nineteenth Centuries

Between the eleventh and thirteenth centuries, when the first universities were founded, an effort to rationalize faith emerged, prompting a more systematic development of sacramental doctrine. This intellectual change gave rise to a clearer separation between the supernatural order (founded on faith) and the natural order (founded on reason), between the spheres of redemption and creation. It also gave rise to a new problem, namely the relationship between the natural and supernatural realms in light of their new-found separation. This new problem profoundly impacted how Christians came to understand the family as a reality that, following the systematization of sacramental doctrine, made marriage one of the seven sacraments of the New Law, and became both natural and supernatural. New doctrinal tensions awakened interest in and a new understanding of the Holy Family’s role in the work of redemption. Therein, the human and the divine, the flesh and the spirit converge in singular perfection. Thus, the Holy Family came to be founded both on relationships of consanguinity and grace.
Yet, as becomes immediately obvious, when it comes to consanguinity and grace, Mary and Joseph’s positions diverge. Mary is the true mother of Jesus, God, and man, while Joseph is only Jesus’ putative father (Moreno-Almárcegui 2016). Mary’s motherhood contains a unique union between the natural and supernatural realms, between the flesh and the spirit, between the bond derived from consanguinity and the one founded on grace.
This article aims to examine how Mary’s unique motherhood was represented and how that representation changed throughout eight centuries. It will do so by analyzing works of Marian art in Spain. Indeed, starting in the eleventh century, adoration of the Virgin Mary began to spread throughout European countries (Sabbé 1951; Christian 1976), which led to the development of a certain mass culture that crystallized in the creation of thousands upon thousands of Marian representations. The first pieces consistently depict the Virgin holding the Christ Child, that is to say, believers consistently saw Mary’s motherhood depicted. Thus, adoration of the Virgin Mary contains an exaltation of her motherhood, both human and divine. In this way, at the core of Mary’s person, i.e., her motherhood, the orders of creation and redemption merge in a particularly strong and exemplary way. In other words, in her relationship with her son, which constitutes the foundation of her identity and her most important mission, consanguinity and grace go hand in hand.
We will see how, over time, representations of Mary’s motherhood changed and, from the beginning of the Modern Age, lost consistency. At first, Mary’s motherhood was envisaged as the archetype of perfect femininity; in the Modern Age, at least in Spain, this femininity–motherhood archetype began to compete with the archetype associated with the immaculate conception. Therein, she is seen as a young woman of extraordinary beauty and charm; alone and without her son, that is, without strong ties that define her identity, she instead stands in glory with an expression of freedom and power that reflects triumphant grace.
To demonstrate this change, we will analyze the more than 400 works of art presented by Trens (1946), who brought together Marian art in Spain across heterogeneous media, including frescoes, miniatures, panels, sculptures, paintings, altarpieces, engravings, and religious cards. This diversity guarantees the sample’s representativeness, and we will focus on overviewing a period (century) rather than on isolated works, breaking down pictures, paintings or miniatures into their most significant elements, representation, and evolution over time. With this, we intend to show how Mary’s motherhood and its evolution was understood and represented. Images of Mary were contemplated en masse and thus were a powerful source of inculturation. Seen as the perfect model of motherhood, imitating her became a profound aspiration for many.

2. From Mary’s Maternal Body to the Immaculate Conception

3. The Mother–Child Relationship: An Analysis of Mary and the Christ Child’s Positions and Gazes

4. The Psychological–Spiritual Nature of the Relationship between Mary and the Christ Child

6. Conclusions: The Subtle Obscuring of Mary’s Maternal Side

We have seen how devotion to Mar–although always present in Christianity– became part of mass culture starting in the eleventh century in tandem with religious orders’ work. At that time, Christian culture was making an enormous effort to unite reason and faith, which gave rise to new dilemmas.
Undoubtedly, Mary’s most exalted gifts are her human–divine motherhood, her virginity, and her immaculate conception and, in a certain sense, they are all inseparable. In Mary, consanguinity and grace are united in perfect harmony. But, in another sense, it can be said that, of all her gifts, the greatest is by far her maternity.
Christian culture presents Mary’s femininity by highlighting her human and divine maternity. Mary is presented as the model woman who perfects femininity. Therein, consanguinity and grace, the human and the divine, earth and sky naturally unite. Mary’s motherhood further explains Jesus’ human and divine condition, which are essential for the incarnation and redemption to take place. Without the incarnation–and without Mary’s maternal response, redemption would not have been possible. We have seen how, in representing Mary’s motherhood, both bodily and spiritual, human, and divine, it becomes the seat of the most sublime divine realities. Everything in the represented relationship contributes to a divine exaltation of the human condition.
In Marian representations over the centuries, Mary’s closeness to her son stands out, whether in her welcoming lap or in her victorious arms, the whole scene exalts the joy of her divine and human motherhood, making her a model worth looking up to. Furthermore, her closeness and naturalness as a mother make her an imitable model. Mary’s mother–son relationship is the source of her most public or visible identity; it is the fundamental task that justifies her life. In giving birth to Christ, a human being, she gives birth to the hope that all humanity will be reunited as a family again. Thus, the redemption comes to and makes its home in the human realm through Mary’s motherhood, her closeness, and her absolute willingness. For this reason, Mary founds the Church around herself; she is the Church in so far as the Body of Christ, and she makes the Church a family. Mary’s body, seat of the Church’s body, appears as the effective and powerful sign of the unconditional gift-of-self that she manifests as part of her most profound identity. The human realm, transformed by grace, opens up to the divine without limits, thus reaching unanticipated perfection.
However, starting with modernity, little by little a shy modesty began to envelop Mary’s humanity to the point that representations of her as pregnant or breastfeeding declined. In the Modern Age, the diffusion of the French cloak, which expresses Mary’s universal maternal protective power for all believers, ends up completely hiding her maternal body. Thus, while Mary was universalized, representations of her motherhood were spiritualized with the fullness of grace.
In iconographic representation, Mary went from sitting in a welcoming and majestic posture (mercifully supporting her son’s redemptive work), where mother and son look expectantly at the devotee, to being represented standing, glorious, and with a triumphant posture, while her motherhood began to be represented less and less, and appears more problematic when depicted. It is seen as affective and “too” human to understand and accept her son’s work of redemption on the cross. In the end, representations of Mary immaculate came to dominate; there, she is young and in the fullness of her beauty, charm, and grace. She stands in glory alone, single, without her son, and without the relationships that establish her identity. In these representations, her femininity no longer appears explicitly maternal. This evolution corresponds to a certain crisis that originated in the sixteenth century related to invocations that present Mary as a joyful mother in favor of invocations that present her as a powerful intercessor. This crisis is strongest in large cities immersed in economic expansion driven by the commercial revolution.18
The crisis of Mary as a model of joyful motherhood is linked to an increasingly spiritualized representation thereof, more glorious, but less welcoming; more powerful, but less merciful, more sorrowful, but less joyful. This does not correspond to a doctrinal evolution, but rather to an emotional climate, what we could qualify as a certain cultural unconscious. The body language in the images studied suggests a certain crisis in the value of motherhood itself as a source of essential feminine identity and, when linked to grace, in the redemptive power of man and the world. This is not a consciously formulated and rationalized crisis, but rather what we could qualify as a certain decline of the divine found in the human realm, which can be glimpsed in a plethora of small details.

This research was funded by Universidad Panamericana, grant number: UP-CI-2021-MEX-07-FCEE.

The data presented in this study are available and can be requested from the corresponding author.

(2) Mary and Child’s gazes and intimacy. 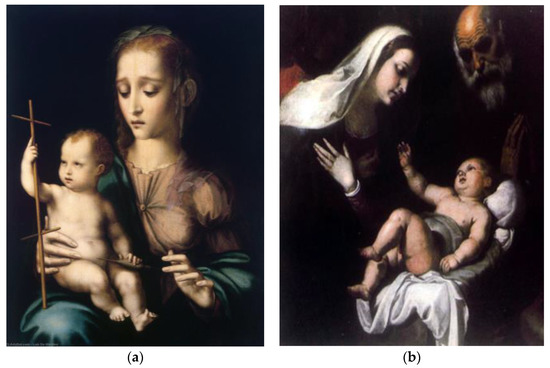 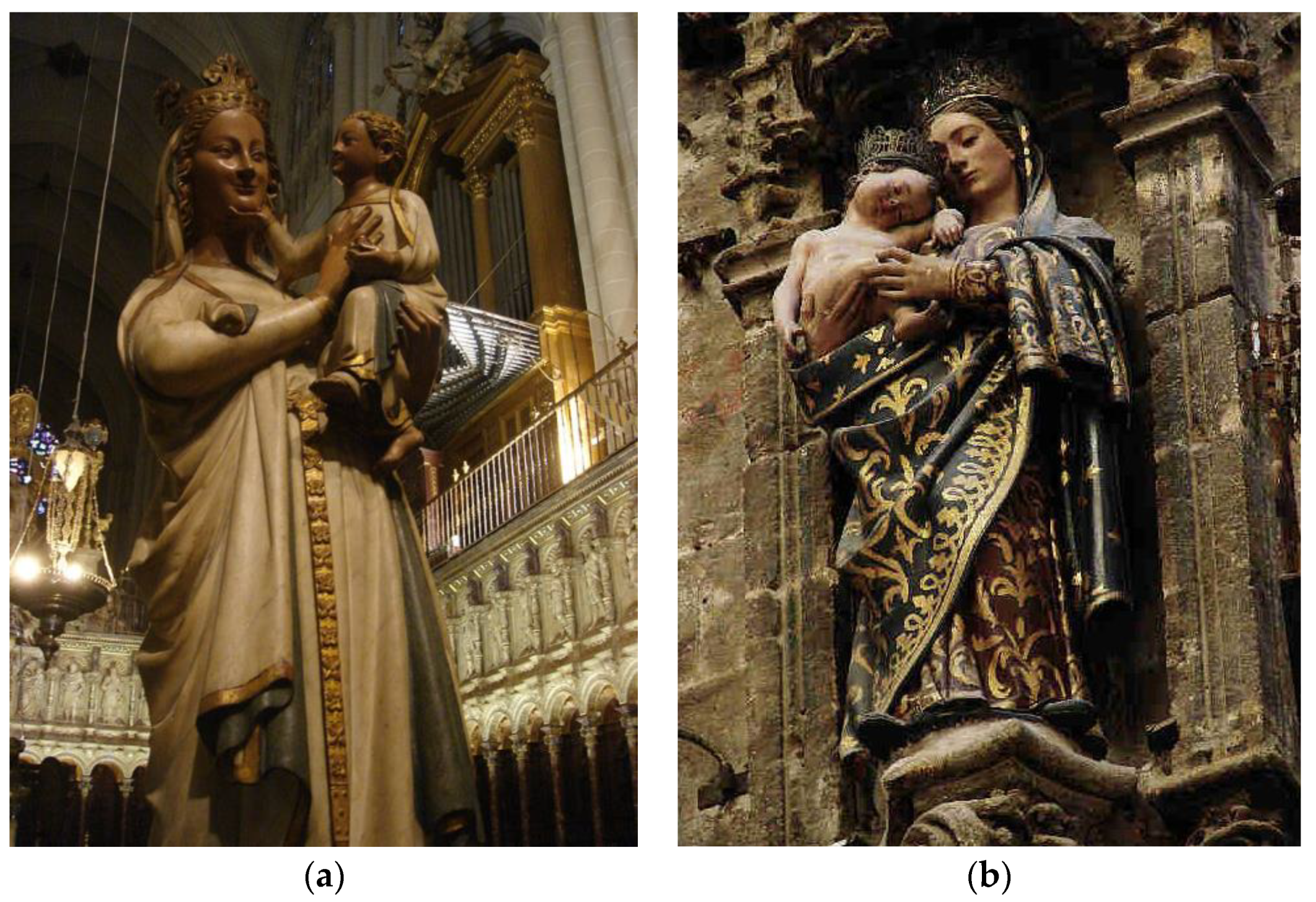 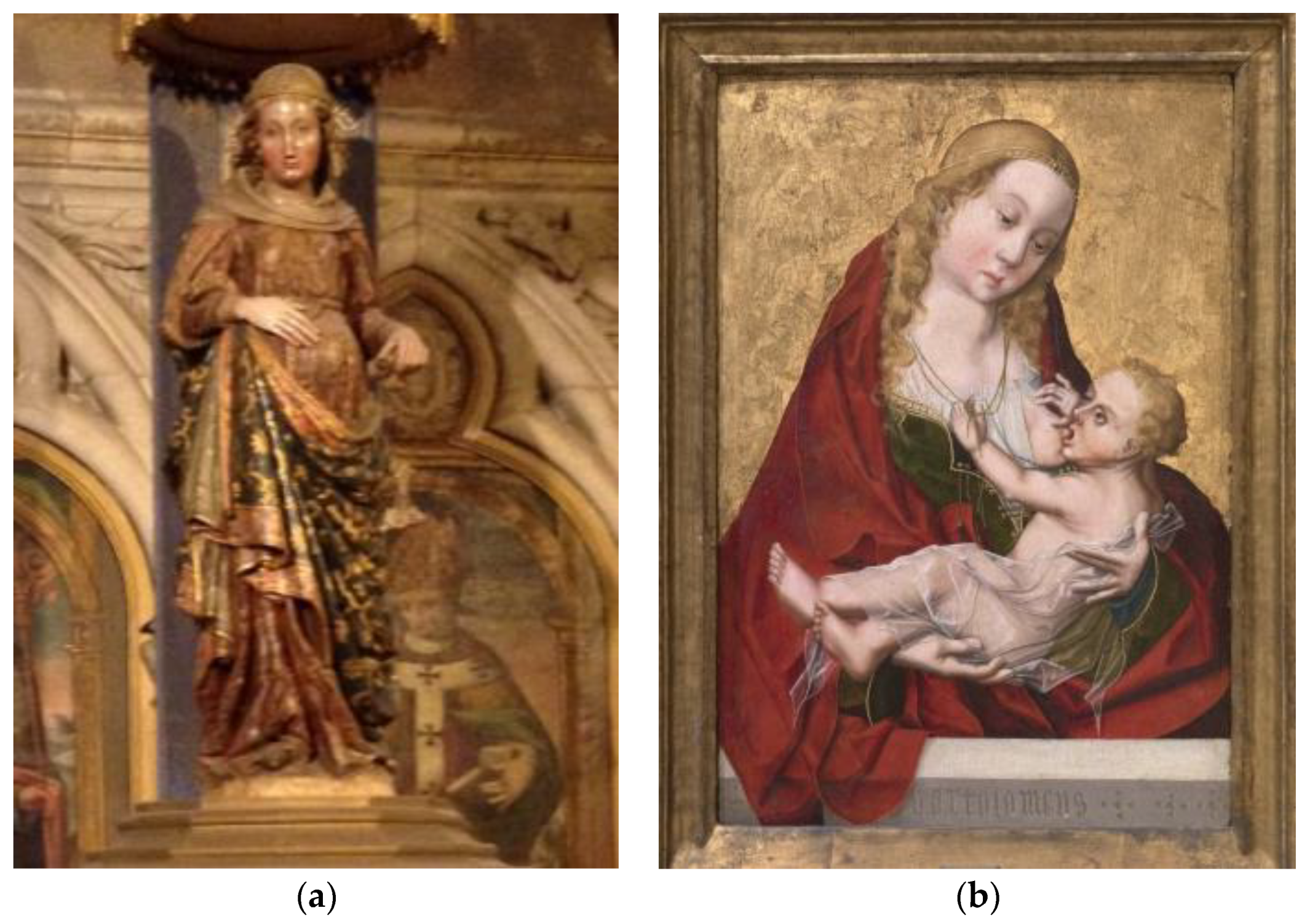 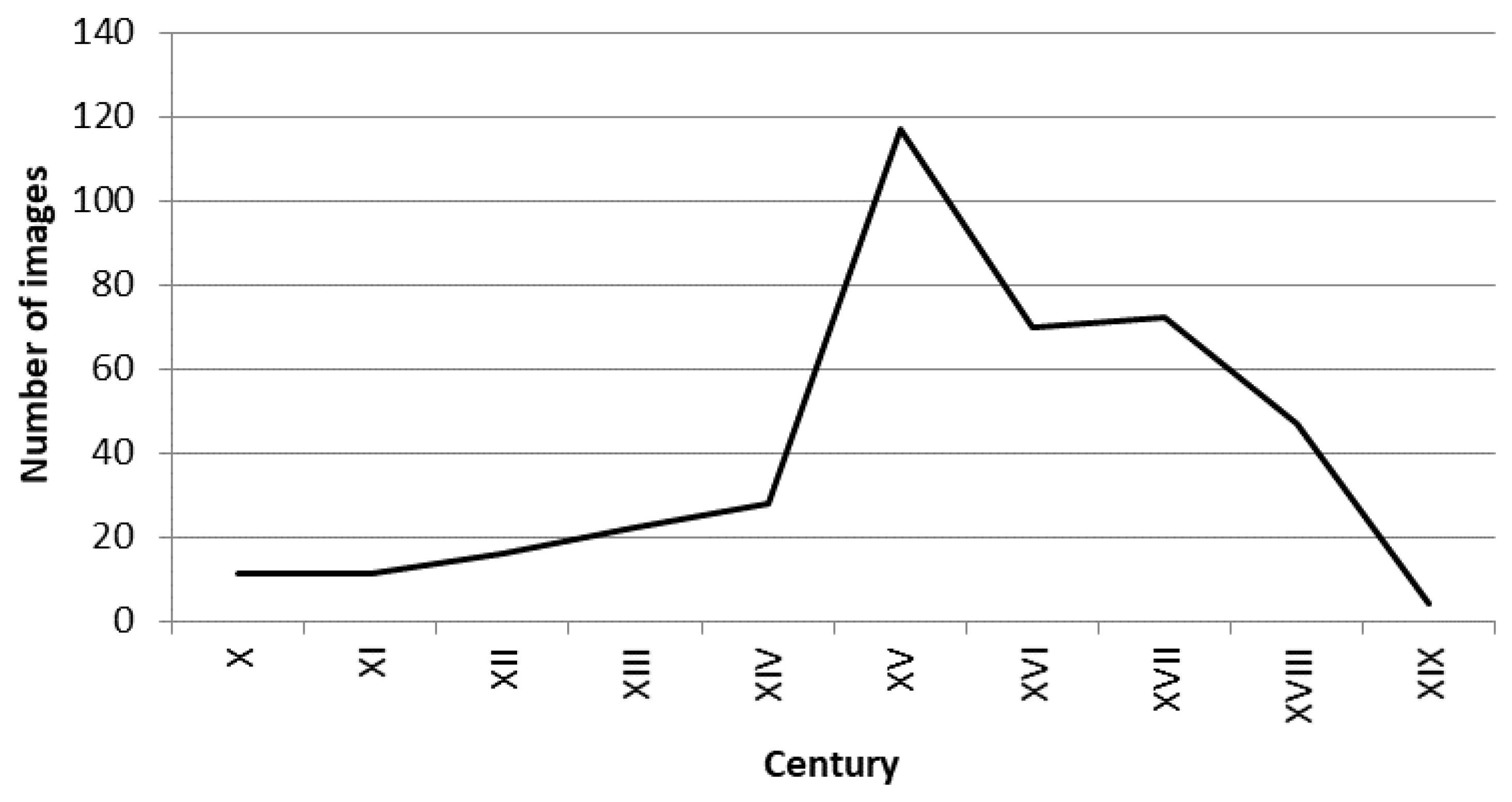 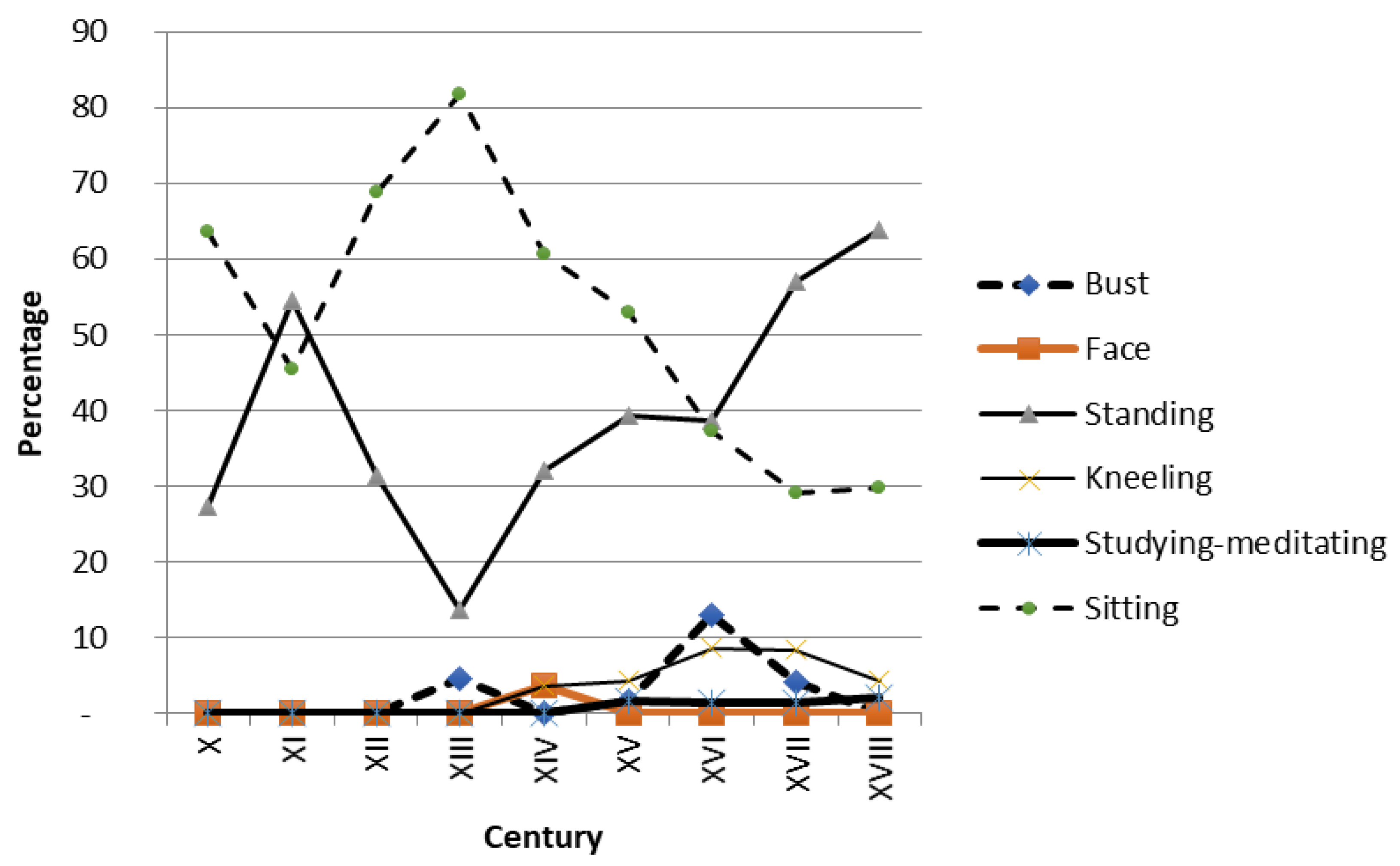 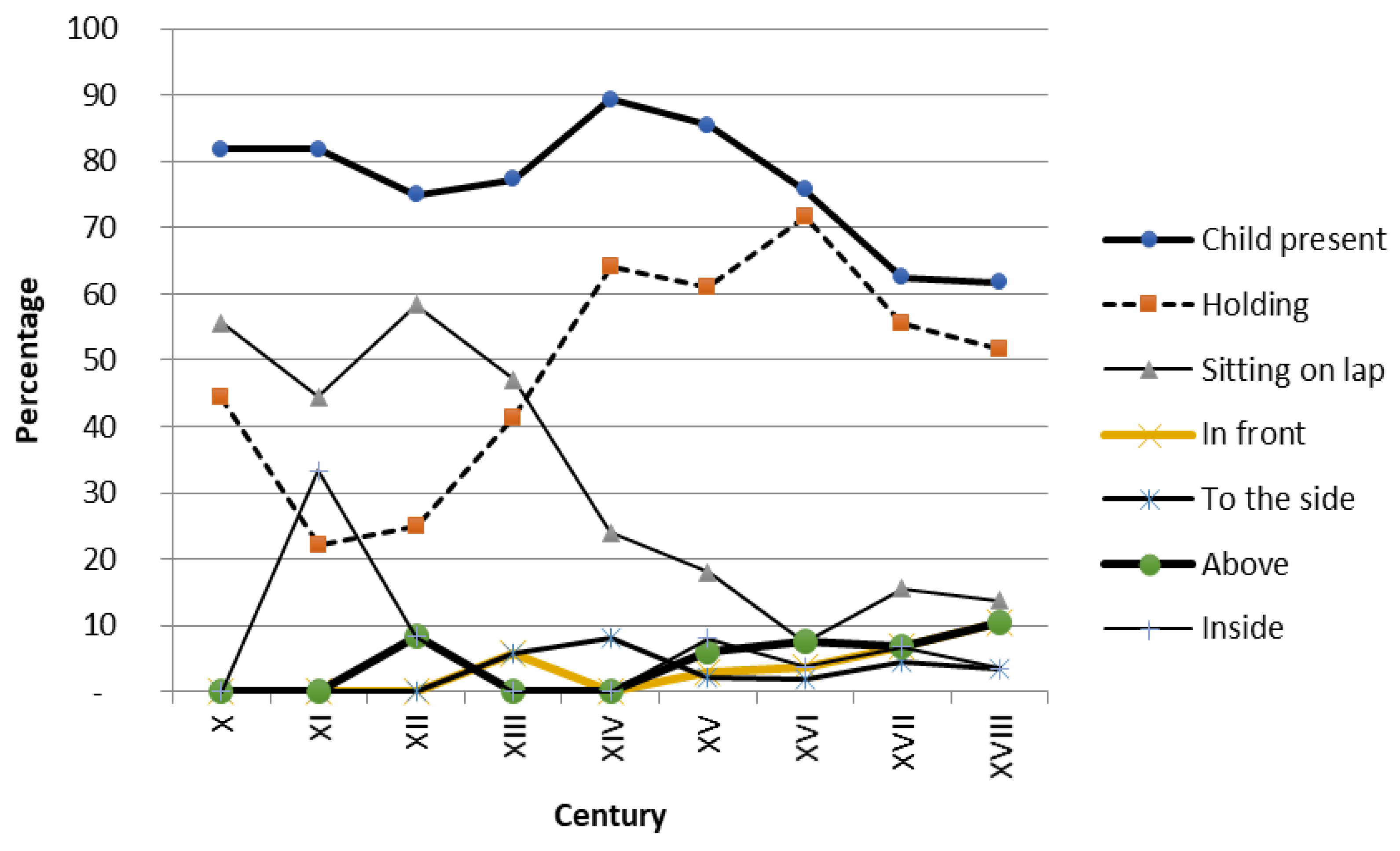 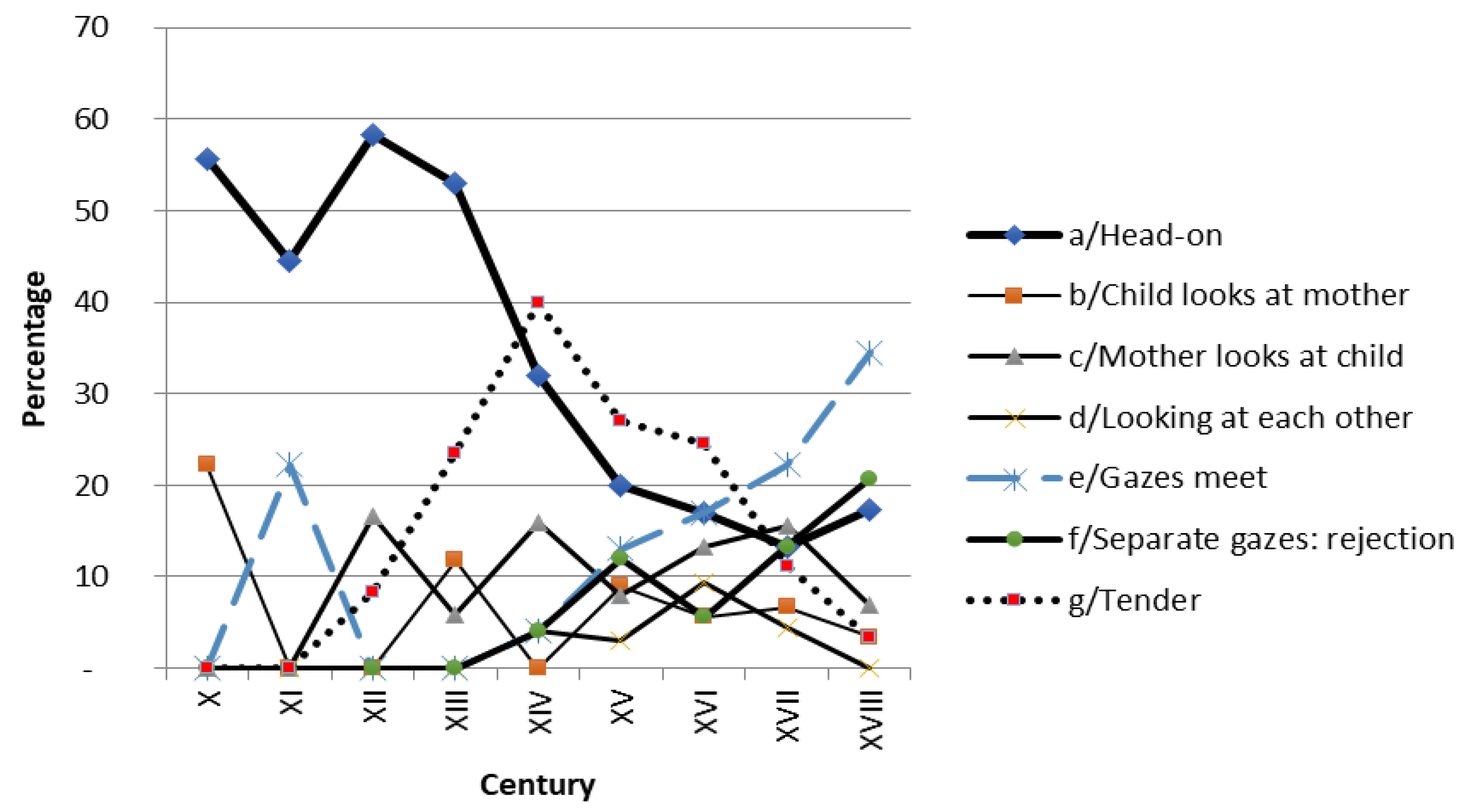 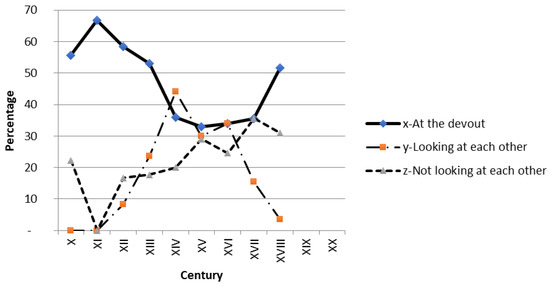 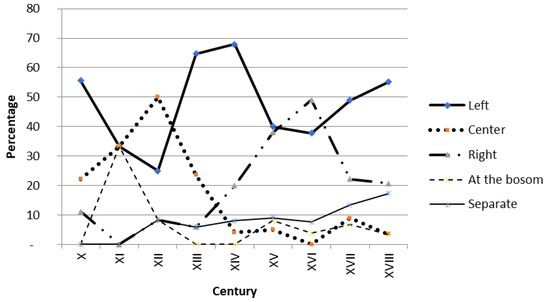 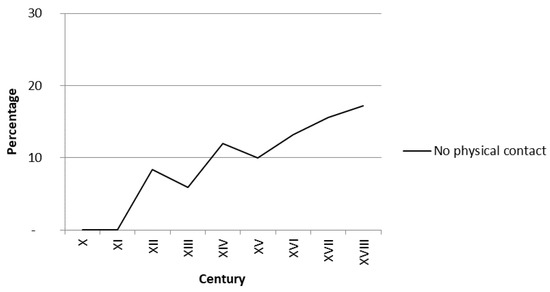 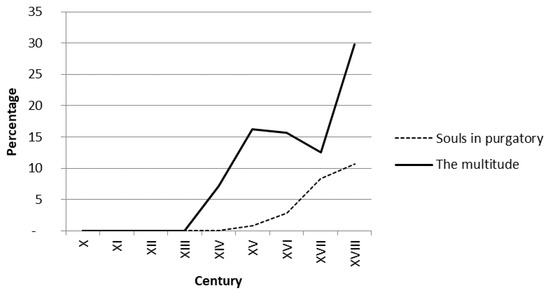