The skin is an attractive tissue for vaccination in a clinical setting due to the accessibility of the target, the ease of monitoring and most importantly the immune competent nature of the dermal tissue. While skin electroporation offers an exciting and novel future methodology for the delivery of DNA vaccines in the clinic, little is known about the actual mechanism of the approach and the elucidation of the resulting immune responses. To further understand the mechanism of this platform, the expression kinetics and localization of a reporter plasmid delivered via a surface dermal electroporation (SEP) device as well as the effect that this treatment would have on the resident immune cells in that tissue was investigated. Initially a time course (day 0 to day 21) of enhanced gene delivery with electroporation (EP) was performed to observe the localization of green fluorescent protein (GFP) expression and the kinetics of its appearance as well as clearance. Using gross imaging, GFP expression was not detected on the surface of the skin until 8 h post treatment. However, histological analysis by fluorescent microscopy revealed GFP positive cells as early as 1 h after plasmid delivery and electroporation. Peak GFP expression was observed at 24 h and the expression was maintained in skin for up to seven days. Using an antibody specific for a keratinocyte cell surface marker, reporter gene positive keratinocytes in the epidermis were identified. H&E staining of treated skin sections demonstrated an influx of monocytes and granulocytes at the EP site starting at 4 h and persisting up to day 14 post treatment. Immunological staining revealed a significant migration of lymphocytic cells to the EP site, congregating around cells expressing the delivered antigen. In conclusion, this study provides insights into the expression kinetics following EP enhanced DNA delivery targeting the dermal space. These findings may have implications in the future to design efficient DNA vaccination strategies for the clinic.
Keywords: intradermal; DNA vaccine; electroporation; kinetics; infiltration intradermal; DNA vaccine; electroporation; kinetics; infiltration

Female Hartley guinea pigs (6 months old) weighing ~350–400 grams were used in this study. The guinea pigs were group housed (4 per cage) with ad libitum access to food and water. Animals were quarantined for two weeks prior to experimentation. All animals were housed and handled according to the standards of the Institutional Animal Care and Use Committee.

Three guinea pigs were shaved and depilated one day prior to initiating the study for the early time points. All three animals received five separate treatments at each defined time point (1, 2, 4, 6 and 8 h). Therefore there was a total of 15 treatment biopsies generated for each individual time point. To assist with tissue harvesting, animals were treated initially for the 8 h time point and subsequently treated in descending time order. The same experimental set up was applied for the later time points (24 h, 48 h, days 3, 7, 12, 14 and 21) where three animals with five separate treatment sites were used. Again, the treatments were performed in descending order to ensure ease of sacrifice. Each treatment at each time point comprised of a single injection of 50 μg of gWIZ-GFP or gWIZ-RFP (Aldevron LLC, Fargo, ND, USA) in 50 µL of PBS delivered intra-dermally using the Mantoux injection method and immediately followed by electroporation using the surface EP device detailed in the introduction [36]. The Mantoux intradermal injection is a standard clinical technique involving a small gauge needle (usually 29G) inserted parallel to the skin bevel up. The device electrical parameters were three pulses of 100 ms at an applied voltage of 25 volts. The time course spanned 21 days and included early time points of 1, 2, 4, 6 and 8 h. At the relevant times, 8 mm biopsy punches of four of the five treatments from each time point on each animal were taken post-mortem and fixed in 4% paraformaldehyde at 4 °C overnight. The following day, skin biopsies were buffered in a 15% sucrose solution and stored until sectioning at 4 °C. The fifth treatment of each time point on each animal was collected and stored at −20 °C for gross imaging.

3.1. Gene Delivery Enhanced by Dermal Electroporation Induces Sustained Expression on the Surface of the Skin

To assess the expression kinetics resulting from gene delivery with a dermal EP device, a plasmid expressing GFP was injected into guinea pig skin at defined time points. Surface EP (SEP) was immediately performed after each injection. The animals were sacrificed post treatments and the skin excised and visualized under a fluorescent microscope (Figure 1). GFP expression appeared at 6 h on the surface of the skin and persisted for seven days. The peak expression was observed at 24 h. During the peak times (24–72 h), the expression was robust and matched in size the diameter of the injection bubble (approximately 5 mm). Within the gross localization pattern of GFP, smaller islands of expression were also noted which coincided in shape and spacing with the direct contact the electrodes make with the skin. The biopsies shown in the figure are representative examples of those seen in multiple treatments on multiple animals.

While the skin surface localization patterns delineate the global expression trends, skin is a squamous epithelial tissue so it was possible that cells below the observable surface (and so not apparent on the surface view) were also being transfected. Through the natural migration of cells in the epidermis, such cells would only later move to the skin surface and so give a falsely slow dynamic. To investigate this further, biopsies were taken of the time points from the original study and fixed sections prepared. Under a fluorescent microscope, sections were observed and scored for GFP positive cells (Figure 2). One hour post treatment, positive cells were identified in skin sections. These cells appeared to be closer to the basement membrane and were likely to be located in the stratum basale level of the epidermis and the mid to upper epidermis (stratum granulosum). As the time course progressed, the transfected cells migrated upwards to the surface of the skin where between day 5 and day 7 the majority of the signal appeared to reside in the stratum corneum. The seemingly brighter GFP signal at day 7 over day 3 is a function of the change in morphology of the reporter gene positive calls as they flatten out in the SC. Post day 7, the GFP positive cells appeared to slough off which is the nature of that barrier layer of the skin. To allow annotation of the structural elements in the skin sections, an enlarged view of the 2 h section is included where the sub-structures and stratum of the skin are noted. In keeping with the shallow electrical field generated by this EP device, all the transfected cells were localized in the epidermis of the skin sections.

Magnified DAPI stained images from the 4 h time point plus and minus electroporation (Figure 3A) demonstrate the morphology of the transfected cells as well as the enhancing effect of electroporation. Using a keratinocyte specific antibody, we were able to identify reporter gene positive cells (in this case, red fluorescent protein (RFP)) which also co-stained for K10, the keratinocyte marker (Figure 3B) visualized with an Alexa 488 secondary antibody. In addition to the positive antibody staining, the morphology of the cells depicted through the reporter gene expression is indicative of keratinocytes.

3.3. Infiltration at the Electroporation Treatment Site is Fast and Persistent

The biopsied sections from Figure 2 were additionally stained with H&E to observe the dynamics of infiltration at the site following EP treatment (Figure 4). Unlike infiltration in the muscle following EP, which is generally a relatively slow process, monocytes and granulocytes were observed migrating to the skin treatment site within 4 h. The inflammatory context persisted for 14 days and appeared resolved at day 21. No evidence of necrosis or localized tissue damage as a result of the EP was observed at any time point. To allow closer analysis of the infiltration and annotation of the structural elements in the skin sections, an enlarged view of the day 7 section is included where the sub-structures and stratum of the skin are noted.

3.4. Pronounced Migration of Lymphocytic Cells Is Observed at the Site of Gene Transfer Enhanced by Electroporation

The major APC in the epidermis is the Langerhans cell. Using an antibody against Langerhans cells and lymphocytes, we immunostained skin sections to observe the dynamics of these migratory cells following EP. Although increased numbers of lymphocytic cells were observed following DNA injection alone and EP alone (data not shown), a significant increase in cell numbers was observed following EP enhanced delivery of plasmid expressing GFP at 6 h post treatment (Figure 5). Through analysis of multiple GFP treated sections, lymphocytic cells could be seen migrating towards and congregating in the areas of the skin biopsy where the transfected GFP expressing cells appeared. 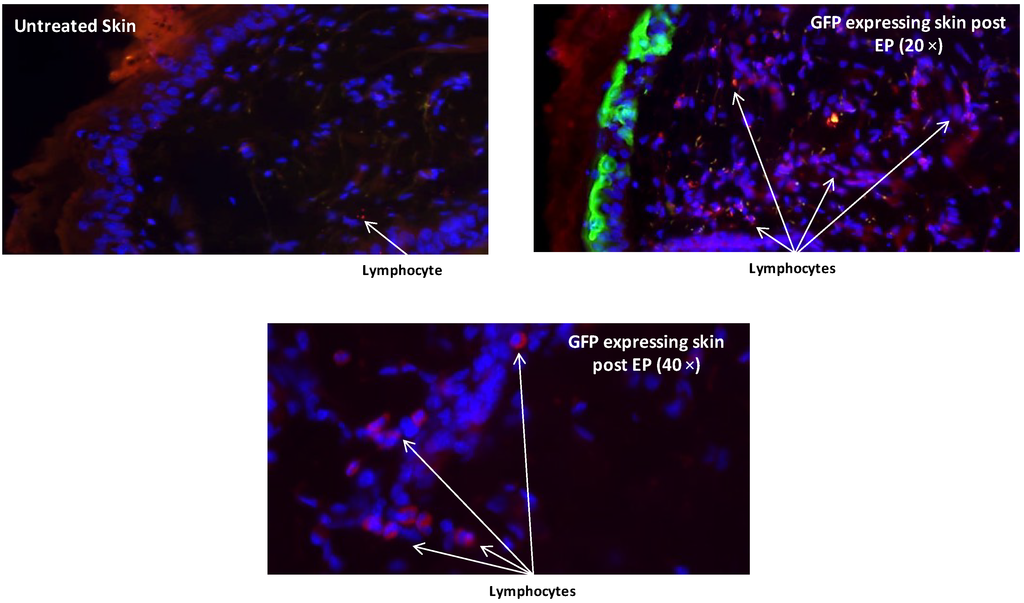 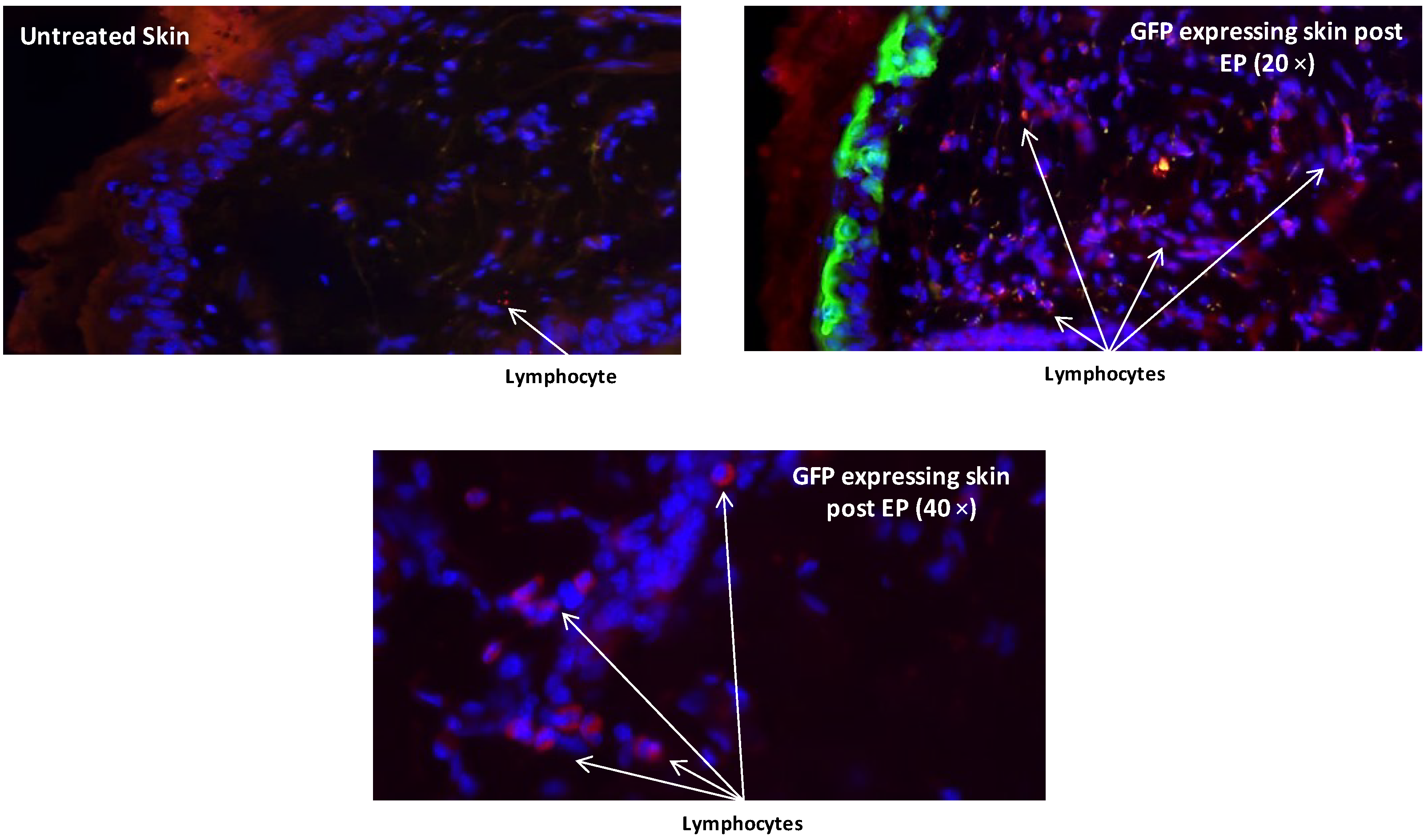 We would like to thank Maria Yang, Philip Armendi and Jenna Robles for plasmid preparation, and Steve Kemmerrer and Jay McCoy for support of the EP device and Kimberly A. Kraynyak for manuscript assistance. This work was supported in part by a Department of Defense SBIR grant (Phase I and Phase II) number W81XWH-11-C-0051.

Authors J.J.M., D.H.A., G.K., C.L.K., T.R.F.S., N.Y.S. and K.E.B. are employees of Inovio Pharmaceuticals and as such receive compensation in the form of salary, stock options and bonuses. Kiosses is an employee of The Scripps Research Institute and declares no conflict of interest.