Diabetic retinopathy is a vision-threatening microvascular complication of diabetes and is one of the leading causes of blindness. Oxidative stress and inflammation play a major role in its pathogenesis, and new therapies counteracting these contributors could be of great interest. In the current study, we investigated the role of vitamin D against oxidative stress and inflammation in human retinal pigment epithelium (RPE) and human retinal endothelial cell lines. We demonstrate that vitamin D effectively counteracts the oxidative stress induced by hydrogen peroxide (H2O2). In addition, the increased levels of proinflammatory proteins such as Interleukin (IL)-6, IL-8, Monocyte chemoattractant protein (MCP)-1, Interferon (IFN)-γ, and tumor necrosis factor (TNF)-α triggered by lipopolysaccharide (LPS) exposure were significantly decreased by vitamin D addition. Interestingly, the increased IL-18 only decreased by vitamin D addition in endothelial cells but not in RPE cells, suggesting a main antiangiogenic role under inflammatory conditions. Moreover, H2O2 and LPS induced the alteration and morphological damage of tight junctions in adult retinal pigment epithelium (ARPE-19) cells that were restored under oxidative and inflammatory conditions by the addition of vitamin D to the media. In conclusion, our data suggest that vitamin D could protect the retina by enhancing antioxidant defense and through exhibiting anti-inflammatory properties. View Full-Text
Keywords: vitamin D; oxidative stress; inflammation; diabetic retinopathy vitamin D; oxidative stress; inflammation; diabetic retinopathy
►▼ Show Figures 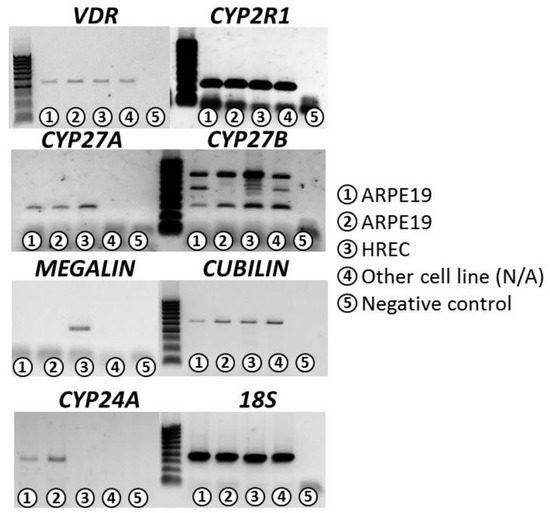