Traumatic brain injuries (TBI) are a serious public-health problem. Furthermore, subsequent TBI events can compromise TBI patients’ quality of life. TBI is linked to a number of long- and short-term complications such as cerebral atrophy and risk of developing dementia and Alzheimer’s Disease (AD). Following direct TBI damage, oxidative stress and the inflammatory response lead to tissue injury-associated neurodegenerative processes that are characteristic of TBI-induced secondary damage. Hidrox® showed positive effects in preclinical models of toxic oxidative stress and neuroinflammation; thus, the aim of this study was to evaluate the effect of Hidrox® administration on TBI-induced secondary injury and on the propagation of the AD-like neuropathology. Hidrox® treatment reduced histological damage after controlled cortical impact. Form a molecular point of view, hydroxytyrosol is able to preserve the cellular redox balance and protein homeostasis by activating the Nrf2 pathway and increasing the expression of phase II detoxifying enzymes such as HO-1, SOD, Catalase, and GSH, thus counteracting the neurodegenerative damage. Additionally, Hidrox® showed anti-inflammatory effects by reducing the activation of the NFkB pathway and related cytokines overexpression. From a behavioral point of view, Hidrox® treatment ameliorated the cognitive dysfunction and memory impairment induced by TBI. Additionally, Hidrox® was associated with a significant increased number of hippocampal neurons in the CA3 region, which were reduced post-TBI. In particular, Hidrox® decreased AD-like phenotypic markers such as ß-amyloid accumulation and APP and p-Tau overexpression. These findings indicate that Hidrox® could be a valuable treatment for TBI-induced secondary injury and AD-like pathological features. View Full-Text
Keywords: oxidative stress; inflammation; neurodegeneration oxidative stress; inflammation; neurodegeneration
►▼ Show Figures 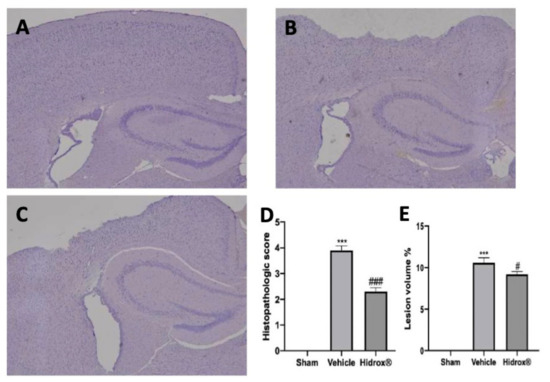