X-linked dystonia–parkinsonism (XDP; OMIM314250), also referred to as DYT3 dystonia or “Lubag” disease, was first described as an endemic disease in the Philippine island of Panay. XDP is an adult-onset movement disorder characterized by progressive and severe dystonia followed by overt parkinsonism in the later years of life. Among the primary monogenic dystonias, XDP has been identified as a transcriptional dysregulation syndrome with impaired expression of the TAF1 (TATA box-binding protein associated factor 1) gene, which is a critical component of the cellular transcription machinery. The major neuropathology of XDP is progressive neuronal loss in the neostriatum (i.e., the caudate nucleus and putamen). XDP may be used as a human disease model to elucidate the pathomechanisms by which striatal neurodegeneration leads to dystonia symptoms. In this article, we introduce recent advances in the understanding of the interplay between pathophysiology and genetics in XDP. View Full-Text
Keywords: X-linked dystonia–parkinsonism; striatum; striosome; neurodegeneration; genetics; pathophysiology X-linked dystonia–parkinsonism; striatum; striosome; neurodegeneration; genetics; pathophysiology
►▼ Show Figures 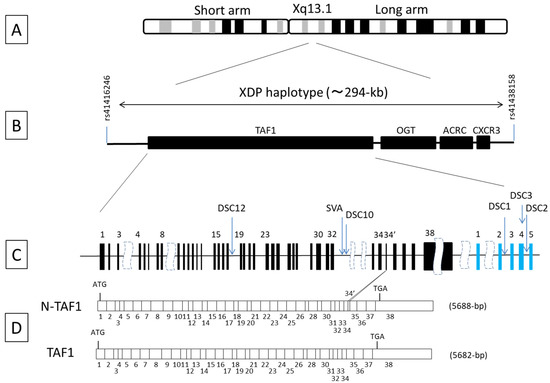