The Cluster Variation Method: A Primer for Neuroscientists
Next Article in Special Issue

Sensorimotor integration is altered in people with chronic pain. While there is substantial evidence that pain interferes with neural activity in primary sensory and motor cortices, much less is known about its impact on integrative sensorimotor processes. Here, the short latency afferent inhibition (SAI) paradigm was used to assess sensorimotor integration in the presence and absence of experimental cutaneous heat pain applied to the hand. Ulnar nerve stimulation was combined with transcranial magnetic stimulation to condition motor evoked potentials (MEPs) in the first dorsal interosseous muscle. Four interstimulus intervals (ISI) were tested, based on the latency of the N20 component of the afferent sensory volley (N20−5 ms, N20+2 ms, N20+4 ms, N20+10 ms). In the PAIN condition, MEPs were smaller compared to the NEUTRAL condition (p = 0.005), and were modulated as a function of the ISI (p = 0.012). Post-hoc planned comparisons revealed that MEPs at N20+2 and N20+4 were inhibited compared to unconditioned MEPs. However, the level of inhibition (SAI) was similar in the PAIN and NEUTRAL conditions. This suggests that the interplay between pain and sensorimotor integration is not mediated through direct and rapid pathways as assessed by SAI, but rather might involve higher-order integrative areas. View Full-Text
Keywords: sensorimotor integration; nociception; transcranial magnetic stimulation; motor cortex; ulnar nerve sensorimotor integration; nociception; transcranial magnetic stimulation; motor cortex; ulnar nerve
►▼ Show Figures 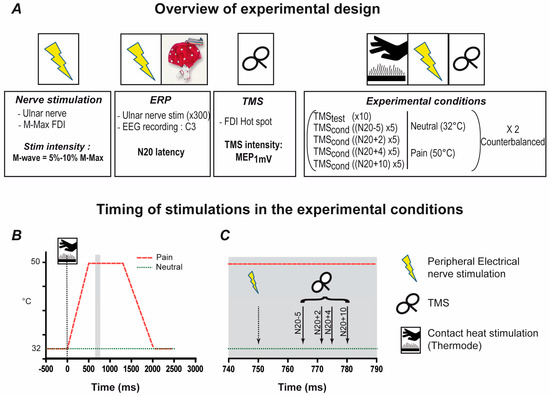