:
(1) Background: Cerebral autoregulation is altered during acute mild traumatic brain injury, or concussion. However, it is unknown how a history of concussion can impact cerebral haemodynamic activity during a task that elicits an autoregulatory response. (2) Methods: We assessed cerebral haemodynamic activity in those with a history of three or more concussions. The study included 44 retired athletes with concussion history and 25 control participants. We recorded participants’ relative changes in right and left pre-frontal cortex oxygenation collected by near-infrared spectroscopy and continuous beat-to-beat blood pressure measured by finger photoplethysmography. Participants completed a 5-min seated rest followed by a 5-min repeated squat (10-s) stand (10-s) maneuver (0.05 Hz) to elicit a cerebral autoregulatory response. Wavelet transformation was applied to the collected signals, allowing separation into cardiac interval I (0.6 to 2 Hz), respiratory interval II (0.145 to 0.6 Hz), and smooth muscle cell interval III (0.052 to 0.145 Hz). (3) Results: Significant increases at cardiac interval I were found for the wavelet amplitude of oxy-haemoglobin and haemoglobin difference at the right pre-frontal cortex. No significant difference was found at the left pre-frontal cortex or the blood pressure wavelet amplitudes. (4) Conclusions: Contributions from cardiac activity to the pre-frontal cortex oxygenation are elevated when eliciting dynamic cerebral autoregulation in those with a history of three or more concussions.
Keywords:
concussion; cerebral autoregulation; pre-frontal cortex oxygenation; blood pressure; wavelet transformation

The majority of research in the concussion literature that has examined the effects of sport-related concussion (SRC) on cerebral physiology has focused on the acute injury phase. This research has documented significant negative effects on brain and cardiac physiology [1,2,3,4,5,6,7,8,9,10,11,12,13]. The acute physiological effects include altered cerebrovascular reactivity [10,14,15], cerebral oxygenation [16], baroreflex sensitivity [5,17], blood pressure variability [5,18], heart rate variability [3,19,20,21], dynamic cerebral autoregulation [22,23,24], and cardiac mechanics [25]. Furthermore, some research has shown that changes in functional connectivity are found in athletes with post-concussion syndrome [16,26,27,28], but not all research supports this contention [29]. It is possible that different analytical methodologies, protocols, ages, post-injury assessment time, and concussion history account for these discrepancies. Indeed, cardiorespiratory regulation and cerebral hemodynamics are influenced by many factors, including breathing pattern and being under anaesthesia [30].
Limited information is available on the long-term effects of sport-related concussion in retired contact sport athletes [23,31], and physiological studies of former athletes with a history of multiple concussions are particularly lacking. Some research has shown that contact sport athletes with a history of concussion can experience the same altered physiological mechanisms as those observed during the acute stage of concussion. For example, when assessing cerebral oxygenation using near infrared spectroscopy (NIRS), differences were documented between those with a history of sport-related concussion and active non-contact sport control participants [16,23,31]. Furthermore, NIRS has also been used successfully to assess cerebral autoregulation in adults [23,32,33,34,35]. Here, we applied NIRS to gain a better understanding of the potential mechanisms related to the recently reported long-term effects of multiple concussions on brain oxygenation and haemodynamics.
Given that biological signal oscillations vary in time, we elected to use wavelet transformation for our analyses [36]. Wavelet transformation is a time-frequency analysis methodology that provides optimal resolution for low and high frequencies and provides critical information about changes that occur in time without making prior assumptions of the data [37]. This makes wavelet analysis an ideal method to investigate biological systems in their natural resting state [38,39].
Based on the mounting research showing that the autonomic nervous system is affected in acute SRC, and that limited information is available on the long-term effects, the primary objective of this study was to examine changes in the cerebral autoregulatory response in retired contact sport athletes who had three or more concussions in their playing careers and compare them to retired non-contact sport athletes without a history of concussion. We used wavelet transformation analysis of the biological signals as this is a precise methodology to investigate biological oscillations over time [38,39]. We hypothesised that wavelet transformation of NIRS-based data could be used to discern physiological differences in the autoregulatory response in retired contact sport athletes with concussion when compared to control participants without concussion.

We used a conservative approach to our data analysis because normality tests such as the Shapiro–Wilk tend to reduce the statistical power when analysing smaller sample sizes. Thus, we used the Wilcoxon rank sum nonparametric test for all data [50] to avoid the assumption of normality.

No significant differences were found in the wavelet transform BP amplitudes in any of the measured frequency intervals (cardiac, respiratory, smooth muscle cell).

We hypothesised that the long-term effects of concussion in retired contact sport athletes could be detected from physiological measures. Our results support this contention; we found that dynamic cerebral autoregulation (dCA) reflected by pre-frontal cortex oxygenation was statistically different between adults with a history of multiple sport-related concussions and a healthy control group when assessed using wavelet transformation. Specifically, we provide new evidence that dCA is influenced by the cardiac contribution to maintaining cerebral autoregulation in those retired athletes with a history of concussion.
Using a repeated squat–stand maneuver that is documented to be an appropriate method to assess cerebral autoregulation [23,24,42], the current research results add to the emerging evidence of potential long-term consequences of multiple concussions in contact sport athletes. Previous research has also shown that neurovascular coupling [31], functional connectivity [16], and dCA [1,23] are altered long-term in those who experience multiple concussions throughout their sporting career. Together this research suggests that retired contact sport athletes who have experienced concussions must be cognisant of those head injuries and consider taking steps to mitigate the potential for additional head trauma.
Our results also add to the body of literature regarding the interaction between the heart and the brain (heart–brain Axis). There is a growing body of knowledge confirming that sport-related concussion has significant adverse effects on cardiac function in both acute and chronic post-concussion [25,51]. Thus, our observation that the cardiac interval I (0.6 to 2 Hz) was the frequency interval that significantly contributed to the relative changes in right pre-frontal cortex oxygenation in HbO2 and HbDiff in those with a history of concussion are notable (see Central Figure 1). The increased relative changes in pre-frontal cortex HbO2 and HbDiff of our concussion group in comparison to the controls reflects differences in the metabolic status and the brain’s response to the autoregulatory (squat-stand) challenge. Simply stated, the heart–brain axis is tightly coupled and our findings suggest that there is a long-term compensatory response from the heartbeat to cerebral haemodynamic activity after concussion. This hypothesis is supported by previous [51] and on-going research [25]. Furthermore, we speculate that our results shine light on the possible implications for cardiac health with ageing, and how concussions early in an athlete’s playing career may contribute to cardiac dysfunction later in life, i.e., ventricular ectopy [51].
Collectively, these results provide significant implications for the management of concussions early in life and later during playing careers in contact sports. For example, in the past there was less emphasis on the recovery period and when athletes could return-to-play safely post-concussion. The old adage was “suck-it up and get back out there”. The findings of this current study now highlight the importance of conducting baseline physiological testing at the beginning of a sporting season for any contact sport athletes. Recent research supports the use of baseline physiological testing for standardising pre-participation guidelines so that the medical staff responsible for getting players back-to-play safely, post-concussion, can provide an objective assessment of the players’ physiological status [5,41] to avoid early return-to-play and potential adverse complications.

Our data confirm the heart’s contributions to cerebral autoregulatory function, and suggests a physiological mechanism for the differences between retired sport contact athletes with a history of multiple concussions and those retired athletes without a history of concussion, i.e., the heart helps to maintain cerebral oxygenation when the body is stressed autonomically in those with a history of concussion. Future research integrating other physiological signals such cerebral blood flow velocity, blood pressure, cerebral oxygenation, ECG, pial artery, and subarachnoid space oscillations during dynamic autoregulatory and cerebrovascular reactivity-induced perturbations will add significantly to this line of research.

Funding from the Canadian Academy of Sport and Exercise Medicine (CASEM) is gratefully acknowledged.

The study was conducted in accordance with the Declaration of Helsinki, and approved by the Institutional Review Board (or Ethics Committee) of the University of Regina and the University of Victoria (REB#2017-032; REB#17-128).

All participants signed a written informed consent to be involved in the study.

The data from this study cannot be accessed at this time.

The authors would like to sincerely thank all the participants for their time and dedication in support of this data collection. We would also like to thank Cameron Bowers, Jake Bryan, Marisa Harrington, Kathleen Leahy and Marcin Gruszecki for their assistance in this project. 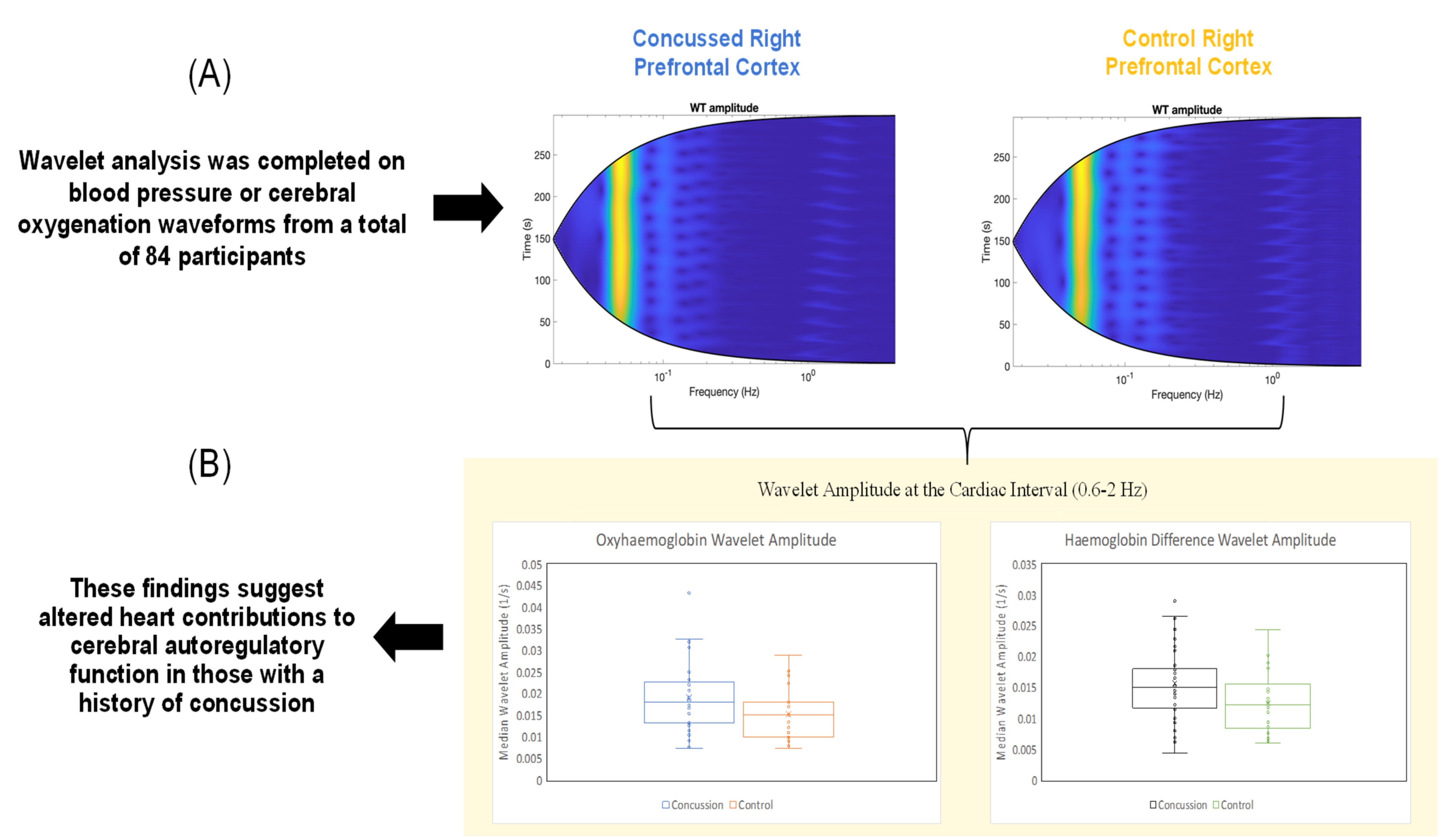