The Impact of Exercise Intervention with Rhythmic Auditory Stimulation to Improve Gait and Mobility in Parkinson Disease: An Umbrella Review

Non-conductive olfactory dysfunction (OD) is an important extra-pulmonary manifestation of coronavirus disease 2019 (COVID-19), which is caused by severe acute respiratory syndrome coronavirus 2 (SARS-CoV-2). Local experience and multiple cross-sectional studies revealed that up to 60% of COVID-19 patients suffer from OD, with a female predominance [1,2]. The severity and duration of COVID-19-related OD varies but olfactory chemosensory disturbances may persist beyond four weeks [3].
The neuroinvasive properties of SARS-CoV-2 at the olfactory epithelium (OE) has been confirmed in human autopsy specimens [4,5,6]. Furthermore, the neurotropic properties of SARS-CoV-2 have been demonstrated in multiple biological models, such as U251 human glioblastoma cell line, Tuj1+ Pax6+Nestin+ human brain organoids, and golden Syrian hamster models [7,8,9]. Direct invasion of SARS-CoV-2 at the delicate neural-mucosal interface between the olfactory and central nervous systems (CNS) may be the underlying pathophysiological cause of COVID-19-related OD.
OE is a pseudostratified columnar epithelium which consists of olfactory sensory neurons, non-neuronal supporting cells (for example: sustentacular cells, Bowman’s glands and ducts), as well as progenitor and stem cells. The OE is maintained continuously by globose basal cells (GBCs) throughout life. After substantial tissue injury, OE regeneration is further supported by the differentiation of multipotent horizontal basal cells (HBCs) [10,11]. Therefore, the regenerative potentials and neuroplasticity of OE may be harnessed in the treatment against COVID-19-related OD.
In this case report, one patient received oral vitamin A (VitA) in combination with smell training (ST) as olfactory treatment (OT) against prolonged COVID-19-related OD. VitA supplement was selected as a metabolic enhancer for OE regeneration based on previous studies [12,13]. In addition, the novel electronic portable aromatic rehabilitation (EPAR) diffuser (SOVOS, Hong Kong, China) technology was adopted for superior olfactory stimulation as an enhancement to conventional ST [14,15].

In this case report, COVID-19-related OD was correlated with OB volume loss and abnormal MR spectroscopy findings, indicating neuronal destruction in the CNS secondary to COVID-19 infection. Furthermore, rs-fMRI demonstrated olfactory FC impairments, thereby providing further insights into the underlying neuropathological process of COVID-19-related OD.
In the treatment for prolonged COVID-19-related OD, P1 was successfully challenged with oral VitA and ST, as demonstrated by (1) interval improvements in olfactory function; (2) structural restoration in OB volumes; (3) olfactory network recovery; and (4) corresponding regional increase in cerebral perfusion.
The long-term outcomes of patients suffering from prolonged COVID-19-related OD remain unknown [22]. Extended longitudinal follow-up studies will be needed to determine the prognosis of olfactory chemosensory deficits for these patients. The therapeutic efficacy of oral VitA and ST in the treatment against prolonged COVID-19-related OD should also be validated in large scale randomized–controlled trials, which would differentiate between spontaneous natural recovery and treatment cure.
The integrity of the mammalian OE is preserved by the mitotically active GBCs and dormant HBCs [10,11]. The dormancy of HBCs is maintained by Notch1 signaling which is correlated with the expression of transcription factor protein 63 (ΔNp63α) [23,24]. During extensive OE injury, Notch1 signals and ΔNp63α expressions are downregulated, leading to HBCs activation and differentiation.
We hypothesize that VitA is an important metabolic substrate for robust neurogenesis at the olfactory apparatus, as retinoic acid (RA; the active metabolite of VitA), has been shown to reduce ΔNp63α expression in HBCs, thereby promoting the differentiation of multipotent Sox2+ and Pax6+ progenitors via the canonical Wnt signaling pathway in the OE [10,25,26]. Furthermore, the neurophysiological importance of RA signaling in the OE has also been demonstrated in the maintenance and survival of Ascl1+ GBCs [27,28].
Within the CNS, RA machineries have been identified in the murine and human brains, especially at the hippocampus and dentate gyrus [29,30,31]. RA increases neurogenesis in the rodent subventricular zone (SVZ)–OB pathway, as demonstrated by increased bromodeoxyuridine-positive (BrdU+, proliferating cell marker) cells in SVZ neurospheres and altered cellular migration to the olfactory bulbs [32]. In addition, depletion of doublecortin-positive (DCX+, immature neuronal marker) cells in the adult murine dentate gyrus was evident in the retinoid–deficient mouse model, indicating the crucial role of RA in the survival of neural progenitors [33].
Olfactory stimulation via ST, as the mainstay of non-pharmaceutical intervention for post-infectious OD, was used to complement the therapeutic effects of oral VitA [14,15,34]. MRI studies in ST-treated patients have demonstrated functional network improvements and structural increase of cortical thickness in the frontal cortex, where the olfactory apparatus is located [19,20,35]. The exact therapeutic mechanism of ST is unknown; however, olfactory stimulations remain essential to the neuro-rehabilitation processes [36]. Reversible and irreversible olfactory occlusion experiments in murine models have shown that olfactory stimuli were contributory to olfactory neurogenesis and glomeruli maturation [37]. In this report, ST was delivered by the novel EPAR diffusers, which utilized ultrasonification to generate aerosolized essential oils for olfactory stimulation. The EPAR diffuser technology enhances the ST experience by facilitating the physiological penetration of aromatic molecules through the olfactory meatus to the OE at the roof of the nasal cavity, therefore providing potent olfactory stimulation and neurosensory rehabilitation.

In conclusion, structural and functional olfactory defects were identified in patients presenting with prolonged COVID-19-related OD. Preliminary evidence suggested that combination treatment by oral VitA and ST may facilitate the recovery of olfaction, restore OB volumes, and improve functional olfactory network connectivity. The therapeutic efficacy of oral VitA and ST for prolonged COVID-19-related OD should be validated in large scale randomized–controlled trials.

This study was approved by the institutional review board (IRB) of the University of Hong Kong/Hospital Authority–UW 20-454. Written informed consents were obtained.

The data presented in this study are available in the manuscript text and Supplementary Materials of this article.

We would like to thank SOVOS (Hong Kong, China) for their non-monetary donations of essential oils and EPAR diffusers for the purpose of smell training in the olfactory treatment.

S.S. has received speaker’s honoraria from Sanofi-Aventis Hong Kong Limited and Abbott laboratories Limited. The other authors declare no conflicts of interest. 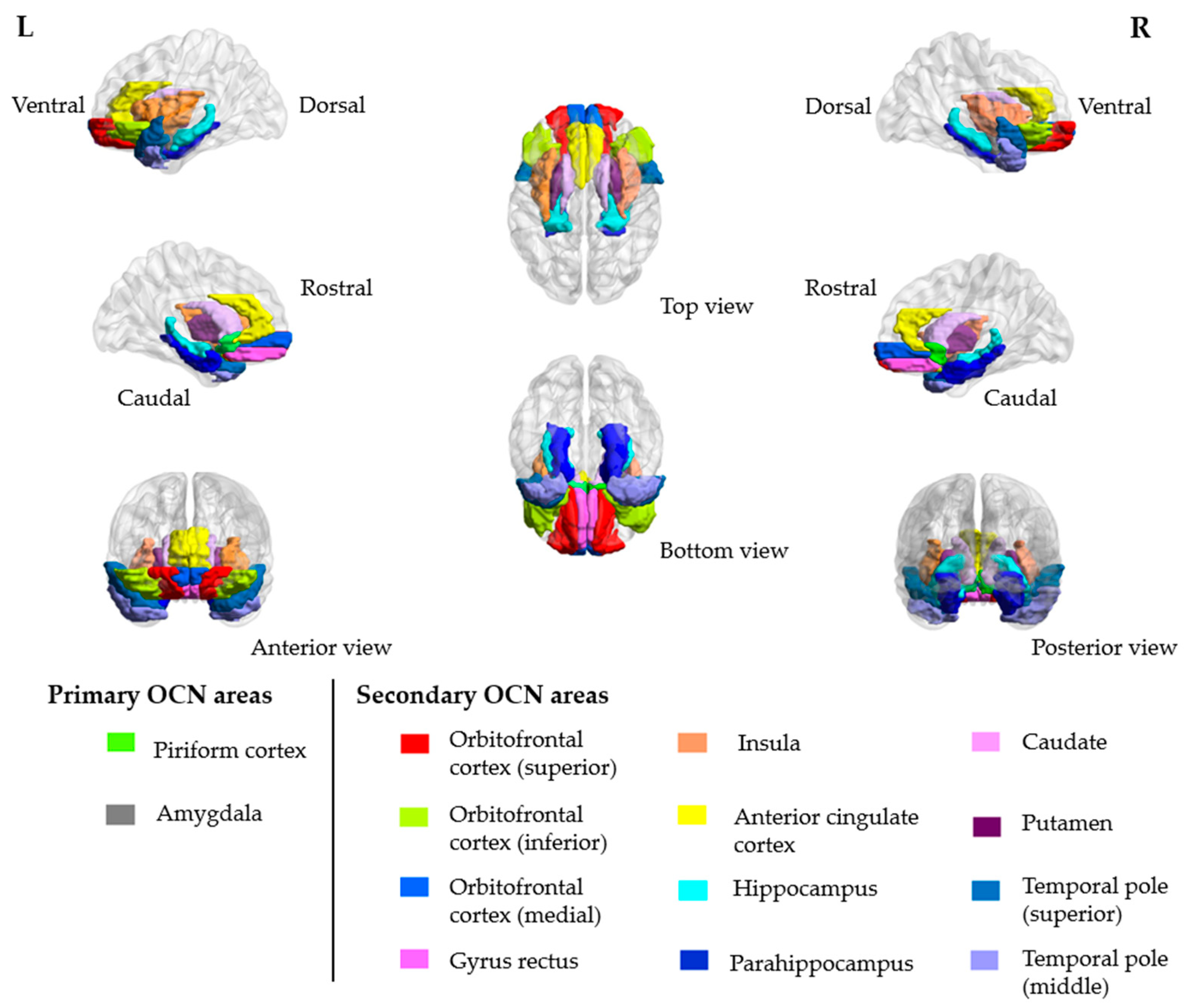