The safety of historic buildings heritage is an important task that becomes more substantial when the buildings are directed to educational purposes. The present study aims at evaluating the dynamic features of the Benedettini complex, an historic monastery located in downtown Catania, which is at present the headquarters of the humanistic studies department of the University of Catania. Both the building’s complex response to a seismic input and the soil-to-structure interaction were investigated using ambient noise recordings. The results point out a multiple dynamic behaviour of the monastery structure that shows several oscillation modes, whereas the identification of a single natural frequency can be observed in some sites where the structure can more freely oscillate. This observation is also confirmed by the variability of computed damping values that appear linked to the different rigidity of the structure, as a function of the either the longitudinal or transversal orientation of the investigated structural elements. Moreover, the comparison between the building’s fundamental period and spectral ratios frequencies, which were obtained from free field ambient noise measurements located outside the monastery, outline the presence of potential resonance effects between the site and structure during a seismic event. Numerical modelling of the local seismic response confirms the obtained experimental site frequencies, setting into evidence that higher amplification factors are reached in the same frequency range characterizing the building. View Full-Text
Keywords: spectral ratio; ambient noise; seismic site response; soil-to-structure interaction; fundamental periods spectral ratio; ambient noise; seismic site response; soil-to-structure interaction; fundamental periods
►▼ Show Figures 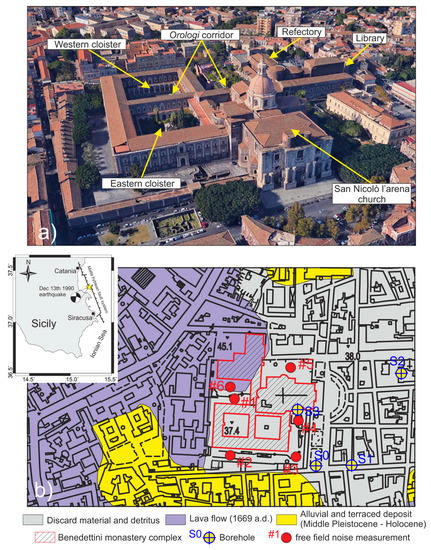