Collaborations on the Edge

Browse Figures
Versions Notes
Refugee camps, especially in their emergency phases, are places where everything seems to be similar, repetitive, and modular. This impression is not only due to the unified shelter unit that is usually distributed by UNHCR1 (traditionally a tent, and recently caravans, prefabs, and developed T-Shelters), but is also due to the camps’ ordered layout and hierarchical plan (Figure 1, Figure 2 and Figure 3). This generates an assumption that all refugees are the same, and a feeling of a collective identity emerges: “All of us carry water from the same water tank...all of us go to the same toilet...all of us go to the same mall....and all of us have the same visa [WFP2 debt cards]...we are all the same…we are all refugees”—a young man from Zaatari camp in Jordan explained. This is true, but it is definitely not the whole truth. When a villager from Daraa was asked about how he feels to be in the same camp with city dwellers, he replied, "I felt they are different... the prestige and lifestyle which they are used to does not fit in here...I thought they should be living in Amman—I am even shy to ask them what happened!". At the same time, a man from Damascus complained about the traditions of villagers from Southern Syria; “Their weddings last for weeks and they are mixed [men and women]! In Damascus, it was just one night… women celebrate by themselves and men celebrate by themselves!”
These cultural differences appear in the building and housing traditions within the unified shelters. For instance, another young man who used to live in Damascus furnished his caravan with sofas and a table similar to salons you find in cities, whereas the houses of the Bedouins (nomads) from Daraa and Homs could be identified by their extensive use of tent sheets to demarcate space and construct the dwelling. Yet, these traditions and cultures mix together. In fact, the camp may present itself as an opportunity that would never have happened for some in Syria. A young man from Zaatari explained about how people from his village changed; “They got mixed with new societies, got introduced to new people, saw how they used to live...back in the village they were closed…now they expanded their horizons.” This observation appears to be valid in an economic sense as well. While many families suffer from the lack of economic opportunities in camps like Zaatari and Azraq in Jordan, some are very well-off. A man sitting inside a house with a small rundown fountain, no different from the houses next to it (Figure 4), explained, “We have a salon for brides attached to our house…we had six young girls working for us…and sometimes we prepared 16 brides a day!” This gives an idea of the different levels of income inside the camp.
Despite the initial visual/systematic homogeneity, the camp is a site for cultural diversity, contestation, and hybridization. Coming from different regions, backgrounds, traditions, urban settings (villagers, city dwellers, nomads), and economic conditions (rich, middle-class, and poor), a refugee camp resembles a colorful mosaic that is suddenly painted with white, over which the big turquoise signage of UNHCR has been placed. These dynamics, mosaics, and colors need to be uncovered again.3 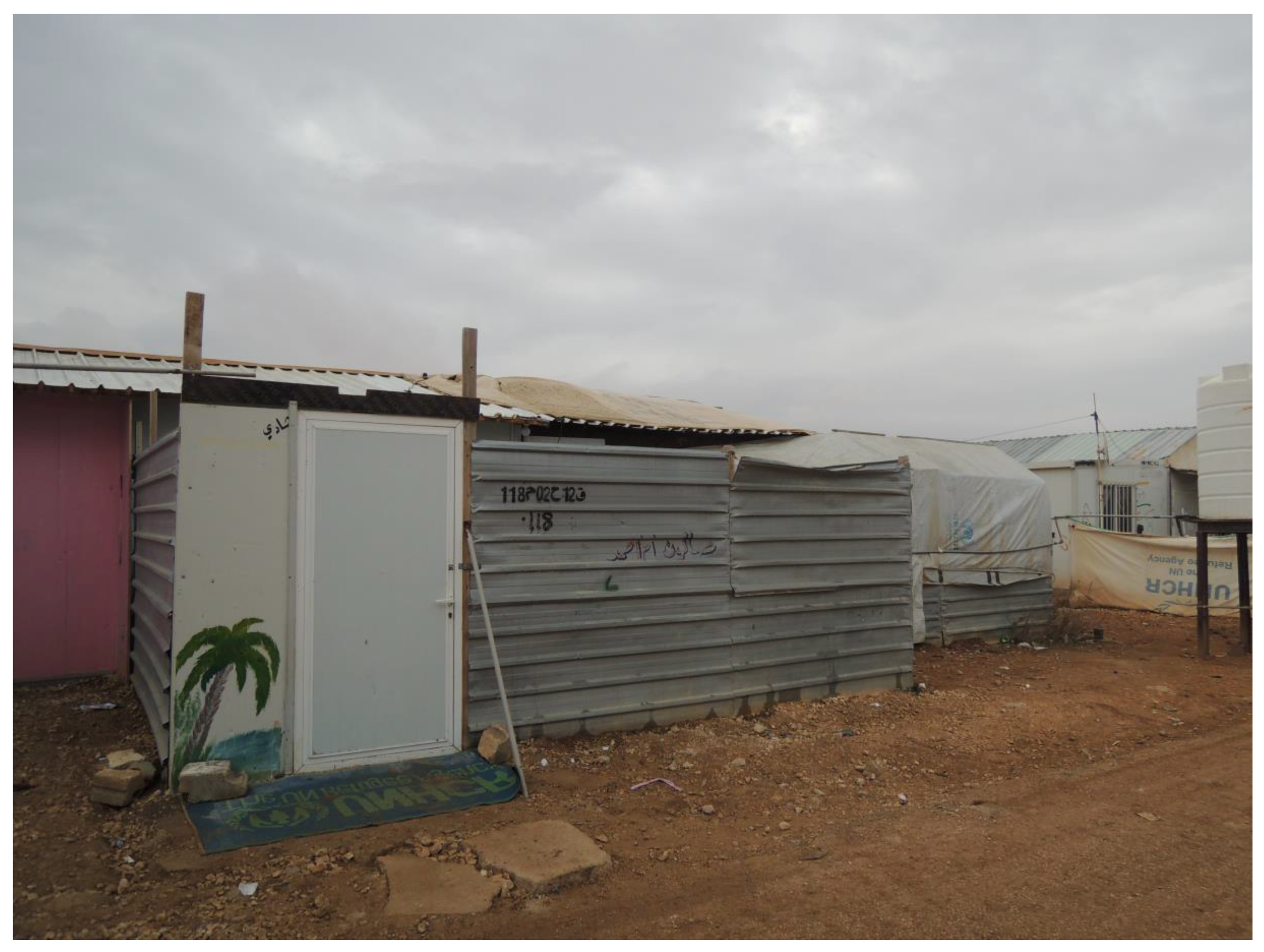