The Virtual as Affirmative Praxis: A Neo-Materialist Approach
Previous Article in Journal

(Dis)orientation, POV and the Virtual

:
This essay moves the first steps toward an understanding of the intricate intertwining between the notion of orientation and that of Point of View (POV) across the philosophy of Gilles Deleuze (and in his work with psychotherapist Felix Guattari), and revendicates their crucial role in relation to the concept of the virtual.
Keywords:
POV; orientation; virtual; center of indetermination; center of envelopment; Leibniz; Bergson; Deleuze

“Which way, which way?”
Alice in Wonderland, Louis Carroll

In Cinema I, Deleuze seems to give a cosmological twist to some of the central ideas of A Thousand Plateaus, and the physical state of the early universe functions here as a sort of physical manifestation of the smooth plane of immanence composed by a-centered and disoriented flowing matter. A matter composed by free-floating singularities in which no point of anchorage nor center of reference would be assignable (p. 57), and characterized by the constant and unstable differential change of orientation and speed: “a plane of immanence […] upon which unformed elements and materials dance [and] are distinguished from one another only by their speed and […] their relation of movement” (p. 255)—a movement defined, as we will see by reading Bergson together with Leibniz, by simultaneous orientation and disorientation, or (dis)orientation. Thus, Deleuze’s cosmology is peculiarly approached in his Cinema I—The Movement-Image (Deleuze [1983] 1986a), the first book the French philosopher dedicates to cinema, followed by Cinema II—The Time-image (Deleuze 1986b). In Cinema I, the philosopher sketches his ontology in properly cosmological terms by proposing to think about the universe as a meta-cinema. Deleuze’s attempt emerges from a close and controversial reading of Matter and Memory by Henri Bergson (Deleuze [1988] 1993). Bergson thinks “cinema misconceives movement […] in the same way of natural perception and for the same reasons: ‘we take snapshots, as it were, of passing reality’” (Deleuze [1983] 1986a, p. 57). In Creative Evolution, Bergson refers to the “cinematographic illusion” (p. 1) as the (illusory) generation of movement from “two complementary given: instantaneous sections which are called images: and a movement or a time which is impersonal, uniform, abstract, invisible, or imperceptible, which is in the apparatus” (p. 2)—the apparatus being either cinema or the subject of natural perception. That’s why, for Bergson,

“the model [of perception] cannot be [the cinematographic model of] natural [italic mine] perception, which does not possess any privilege, [but] a state of things which would constantly change, a flowing-matter in which no point of anchorage nor center of reference would be assignable”.
(Deleuze [1988] 1993, p. 57)

By proposing to think about the universe as a meta-cinema, Deleuze turns upside down Bergson’s criticism, and recasts cinema as the cosmological process through which solid oriented matter emerges from “flowing-matter”. From the “cooling down of the plane of immanence [in the cosmology of the Big Bang, the cooling down of the quantum fluctuations], […] the first opacities, the first screens obstructing the diffusion of light” (Deleuze [1983] 1986a, p. 63) in the form of solid matter, allows the formation of more solid matter, in an accelerating process of concretion. In this sense, Deleuze’s notion of cinema escapes from the limits of natural perception, and turns Bergson’s cosmology into a meta-cinematic machine composed by image(s)-movement (p. 58) constituting a plane of immanence of flowing-matter, or Bergson’s “acentred universe of movement-images” (p. 62) which “act and react on all their facets [in all directions] and in all their parts” (p. 61):

“everything […] is indistinguishable from its actions and reactions: this is universal variation. Every image is ‘merely a road by which pass, in every direction, the modifications propagated throughout the immensity of the universe’”.
(p. 58)

From these conditions, chunks of matter start to cluster turning directionlessness into dimension(s) giving raise to striatures of various kind, from crystal of matter to biological “centre of indetermination” (p. 62). The expression “centre of indetermination” (p. 62), borrowed from Bergson, recurrent in Cinema I, refers to the living images “which are formed in the acentred universe of movement-images”, and which emerge from “the gap, or the interval between a received and an executed movement” (p. 62). Thus, from a universe of disoriented and directionless movement-images acting and reacting on all their facets and in all their parts, Deleuze introduces the perception-image. The perception-image refers to a type of image which “only receive[s] actions on one facet or in certain parts and only execute[s] reactions by and in other parts” (p. 62). It’s within this process that living center of indetermination emerges from the interval, together with perception: “the image reflected by a living image is precisely what will be called perception” (p. 62).

“The thing is the image as it is in itself, as it is related to all the other images to whose action it completely submits and on which it reacts immediately. But the perception of the thing is the same image related to another special image which frames it, and which only retains a partial action from it”.
(Deleuze [1983] 1986a, p. 64)

Perception happens in the interval, and expresses the “coming to the point of view” (Deleuze [1988] 1993, p. 19) occupied by the center of indetermination. Otherwise said, POV is the form of the interval in terms of orientation. Orientation emerges as the capability of living images to occupy a gap between action and reaction. Between the directionless and disoriented constant action/reaction of the movement-images, the emergence of intervals in the fabric of movement opens the space for the constitution of organic living matter characterized by distinctive orientations. Intervals define living images and their orientation within what von Uexküll calls Umwelten:

“everything a subject perceives belongs to its perception world [Merkwelt], and everything it produces, to its effect world [Wirkwelt]. These two worlds, of perception and production of effects, form one closed unit, the environment [Umwelt]”.
(von Uexküll 2010, p. 42)

Reading von Uexküll through Deleuze and Bergson allows us to think about perception and production as the two limit facets of the interval. The interval produces a curve—or an inflection, in Leibniz’s words: “by incurving, perceived things tender their unstable facet towards me, at the same time as my delayed reaction, which has become action, learns to use them” (Deleuze [1983] 1986a, p. 64). Deleuze introduces here the action-image, and describes both perception-image and action-image as the “specialization of the two limit-facets, perceptive and active”, of the gap or interval: in fact, “perception is only one side of the gap, and action is the other side” (p. 64). Nevertheless,

For Bergson, there is no perception without affection (Bergson 1988, pp. 17–76). Affection happens

“between a perception which is troubling in certain respects and a hesitant action. It is a coincidence […] in which the subject perceives itself, or rather experiences itself or feels itself ‘from the inside’”.
(Deleuze [1983] 1986a, p. 65)

Thus, a larval Umwelt begins to take shape already at the level of the interval between action and reaction, where an orientation or a POV emerges. Bergson’s image-perception functions as the expressive manifestation of the POV occupied by a center of indetermination emerging from the interval between action and reaction, an interval which produces, together with an image-affection, an image-perception, and a (biological) orientation within an Umwelt, culminating in an image-action (based on the Umwelt’s affordances). Bergson’s center of indetermination becomes the site of unfolding of the POV folded in the gap, the site where affection turns into perception and orientation and, eventually, into action (see Figure 1). 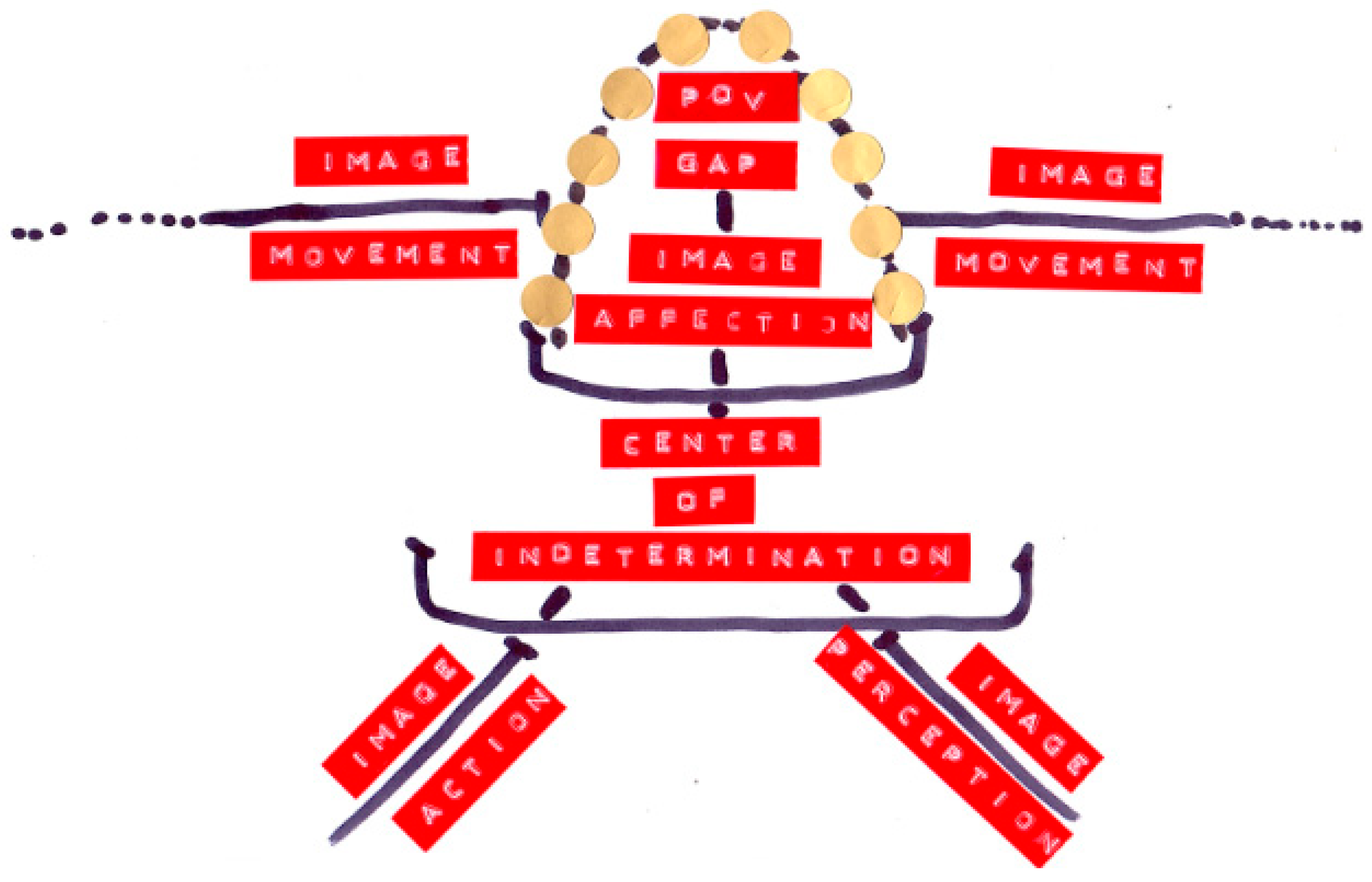 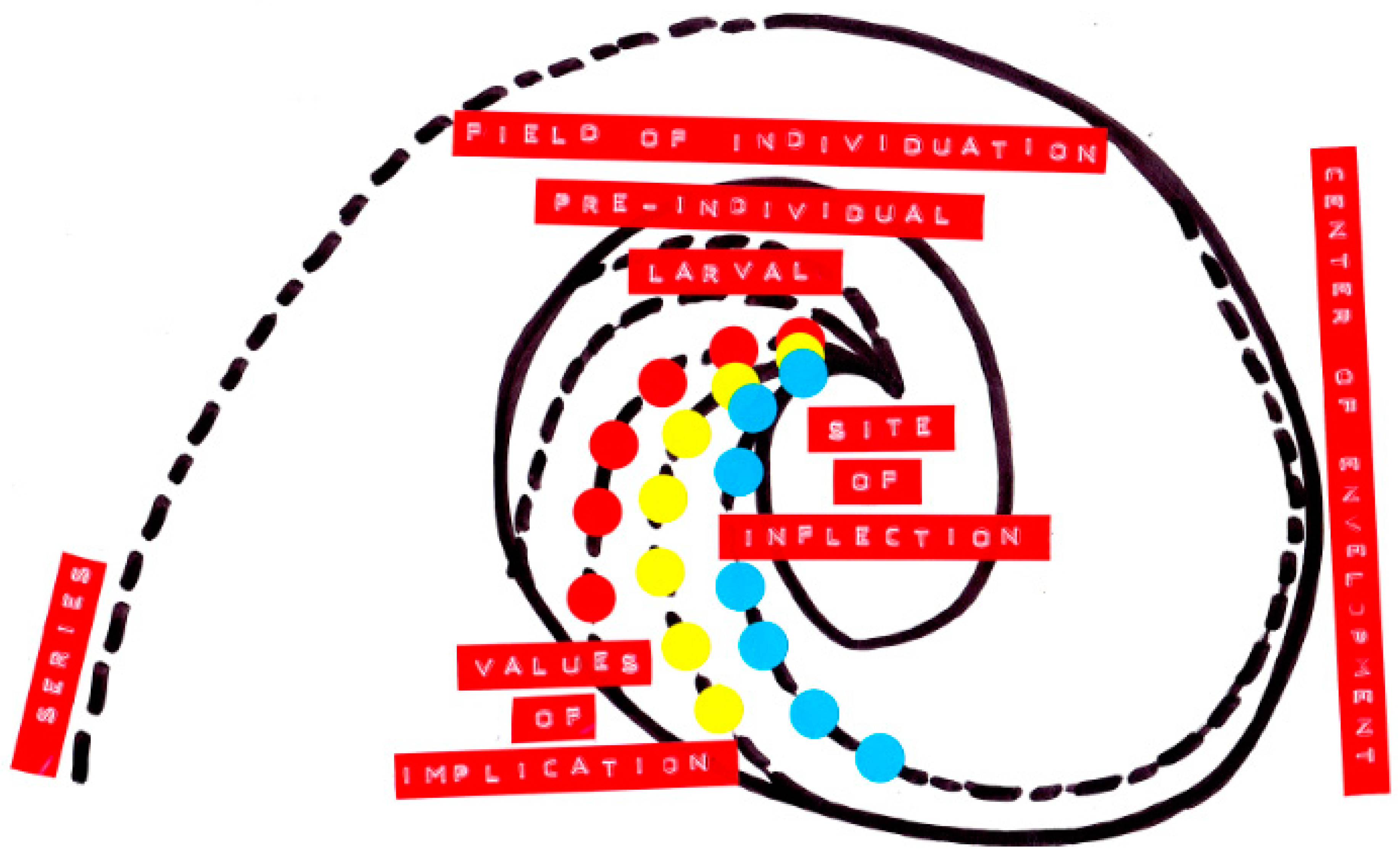 © 2021 by the author. Licensee MDPI, Basel, Switzerland. This article is an open access article distributed under the terms and conditions of the Creative Commons Attribution (CC BY) license (http://creativecommons.org/licenses/by/4.0/).