The Machine as Art (in the 20th Century): An Introduction †

Centre André Chastel, Université Paris-Sorbonne, Galerie Colbert, 2 rue Vivienne, 75002 Paris, France
†
Inasmuch as Paris was the epicenter of much of the history reviewed herein—as noted in the text, for example, the two leading machine sculptors of the 20th century, Jean Tinguely and Nicolas Schöffer, had moved there from, respectively, Switzerland and Hungary to launch their careers—Arts is pleased, via the link following, to make available as Supplementary Material the original French version of this essay: www.mdpi.com/2076-0752/7/1/4/s1.
Arts 2018, 7(1), 4; https://doi.org/10.3390/arts7010004
Received: 2 November 2017 / Revised: 6 December 2017 / Accepted: 6 December 2017 / Published: 23 January 2018
(This article belongs to the Special Issue The Machine as Art (in the 20th Century))

The machine, over the course of the 20th century, progressively integrated itself into all fields of human activity, including artistic creation; and indeed, with the first decades of that century having established a surprisingly vital and wide-ranging series of perspectives on the relationship between art and the machine, certain artists in the wake of the Second World War no longer felt compelled to treat the machine as a mere theme or source of inspiration: the machine itself becomes art—unless it is art which seeks to become mechanical? The artist mutates into “artist-engineer”; and this transition, resonating within a specific historical context, leads not only to a questioning of the nature of the work itself, but also to a broader questioning which places us within the realm of anthropology: what is this art telling us about the actual conditions of contemporary human society, and what is it telling us about the future to which we aspire? It is the goal of this special issue of Arts to stimulate an historically conscious, protean, and global (re)thinking of the cultural relationship between man and machine; and to this end, we welcome contributions falling anywhere within the nearly infinite spectrum represented by the prismatic period during the middle of the last century in which the machine became a legitimate artistic medium. View Full-Text
Keywords: art; machine; science; technology; machine aesthetics; systems aesthetics; 20th century art history art; machine; science; technology; machine aesthetics; systems aesthetics; 20th century art history
►▼ Show Figures 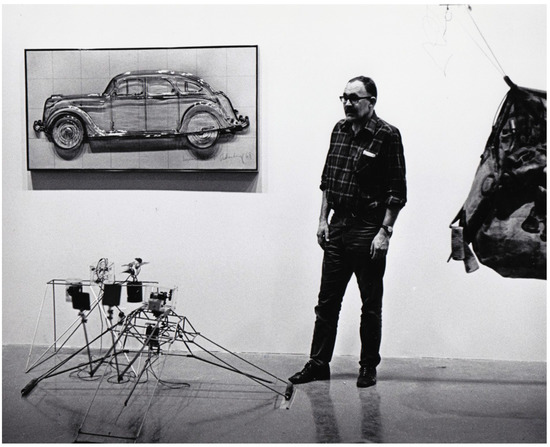