What Is Body, What Is Space? Performance and the Cinematic Body in a Non-Anthropocentric Cinema

The golden ratio concept is used for the first time here for sound-hole size and location design in musical instruments of the lute family in order to enhance the damping capability. The golden ratio has been claimed to have held a special fascination for at least 2400 years, though without reliable evidence (Markowsky 1992). According to Mario Livio:

“Some of the greatest mathematical minds of all ages, from Pythagoras and Euclid in ancient Greece, through the medieval Italian mathematician Leonardo of Pisa and the Renaissance astronomer Johannes Kepler, to present-day scientific figures such as Oxford physicist Roger Penrose, have spent endless hours over this simple ratio and its properties. But the fascination with the Golden Ratio is not confined just to mathematicians. Biologists, artists, musicians, historians, architects, psychologists, and even mystics have pondered and debated the basis of its ubiquity and appeal. In fact, it is probably fair to say that the Golden Ratio has inspired thinkers of all disciplines like no other number in the history of mathematics.”
(Livio 2002)

This ratio has also inspired the researchers in the field of acoustics characteristics of instruments. Takegawa (2008) invented a drum with optimized air vent holes using the golden ratio in 2008, and King (2004; 2005) presented a comprehensive research study on locating the Stradivari’s violin hole locations using the golden ratio. The authors spent several hours analyzing, modelling and simulating different assumptions and the manufacturing process to find the optimized sound-hole for specific musical instruments to determine the maximum sound radiation capability. The results of all analytical and trial and error procedures are summarized here entitled: Golden Method. The assumptions used for this method are:
Moreover, without loss of generality, the lute is basically used to describe the method because it is a world-wide well-reputed instrument. However, the procedure is exactly the same for all lute family musical instruments.
The Golden Method is presented for a typical professional lute:
In a musical instrument of the lute family, to optimize the sound-hole location and size (or to check that a sound-hole is optimized) from a damping capability point of view, perform the following steps:
Note: It rarely happens that in an oval soundboard (with an almost correct geometry and proportion) the second golden circle does not touch the golden spirals and does not follow this golden method.
Note that C3 usually touches the spirals in the 4th golden rectangle (Figure 5b); it can be seen in Figure 5 that C3 precisely tangents on the sound hole of the manufactured lute. In this way, one can optimize the sound hole of any lute family instrument by relation between geometry and the golden ratio (Φ) or appraise the manufacturing process from the sound-hole design and location point of view.

In order to confirm the effectiveness of the proposed Golden Method, an experimental case study is presented in this section. The setar is selected as the case study. A setar (from seh, meaning “three” and tār, meaning “string”) is a Persian musical instrument. It is a member of the lute family, which is played with the index finger of the right hand. Two and a half centuries ago, a fourth string was added to the setar (Khaleghi 1963). It has 25–27 moveable frets which are usually made of animal intestines or silk. It originated in Persia before the spread of Islam. Figure 6 shows a typical setar (dimensions are in millimetres). The sound box structure of this instrument is similar to that of the lute but only with respect to the size of soundboard and the type of sound-holes.
Setar makers believe that the holes adjust the sound of the instrument. Usually after final shaving of the soundboard, they punch the holes. A review of several setar patterns shows that there is no fixed pattern for making the sound-holes; the setar makers design their pattern based on their manner and experience. One of the main differences between setar patterns is the templates of sound-holes that are bored in the soundboard and guttoral are of the setar. The manufacturers usually find the location of the main hole by using a tuning fork at note of A = 440 Hz. In this way, they vibrate the tuning fork, put it on the bridge area and move it to the neck. The point where the sound reaches its peak is marked, and the procedure is repeated several times to specify the main sound-hole location precisely. The manufacturers punch a 5-mm hole and the other holes should be along the perimeter of this hole (Figure 7) (Shirazi 1990).
Some researchers claim that the main air resonance frequency might be approximated by the linear superposition of the effect of each hole (Shaw 1990; Takegawa 2008). Some conventional types of setar sound-hole patterns are shown in Figure 8.
For comparison, two well-reputed setar patterns are selected in this study:

The first one is called the Delroba, shown in Figure 9a, designed by the legendary classical luthier Mehdi Kamalian (1918–1997) and is a well-preserved example of his work. Here, we analyze the air mode schema of this pattern for optimizing the sound-holes using the Golden Method.
Using the Golden Method described in Section 2, the following pattern shown in Figure 9b is achieved for the Delroba. As shown in this figure, the middle holes as well as the main hole are located inside the golden circle.

The second case study is the Eshghi pattern by Mohammad Navaei (1903–1987). Masters of setar making believe that this pattern is the best scale pattern ever designed and implemented. This model has fewer holes than the Delroba. Note that all Eshghi holes are located in the golden circle as shown in Figure 10.

Finally, in order to prove the effectiveness of the Golden method in enhancing the sound radiation ability, a new musical instrument with an optimized sound-hole was developed to compare with the above-mentioned instruments. We called this the Mahava. It is worthwhile to mention that the Delroba, Eshghi, and Mahava are exactly the same in sound-hole size, location and pattern to ensure fair comparison. Figure 11 shows the construction procedure of the Mahava.

Figure 12 shows a photograph of the microphone array. Identical RØDE NT1000 Cardioid polar pattern microphones (RØDE Microphones, Silverwater, Australia) were positioned at the vertices and front side of the samples, pointing directly inward. The microphone position was adjusted so that there was exactly 18” (45.72 cm) between the microphone and sample; the axis was aimed toward the opposite vertex in the array. The array was suspended in the center (near the floor) of an 8 × 6 × 3 m studio. The microphones were routed through preamps with a flat frequency response to a Focusrite Scarlett 6i6 sound card (Focusrite Audio Engineering Ltd., High Wycombe, UK). All microphone signal paths were normalized to within 1 dB, using a test tone generator.

The main issue in the test procedure was that there was no control over the force of the strike on the string. In fact, one could easily imagine that the harder the pluck, the louder the sound, and the longer the sound would take to decay; this problem would affect the analysis results. To avoid this issue, three musicians who were not aware of the target of the research were selected, and the experiments were performed by them.
Then, sets of “perfect” impulse responses were selected based on the excitation signal. This was done by eliminating any double hammer hits, eliminating any recordings where the researcher commented during the experiment that it was a bad hit, then finally choosing from the remaining possibilities the force hammer impulse with the narrowest and highest peak. Selected signals were transferred digitally to a computer for analysis.
The experiment was performed on the third string of samples that was tuned to 440 Hz. The third string was composed of phosphor bronze or brass. It has a minimum tensile strength of 900 N/mm2. The diameter of the third string of a Persian setar is normally 0.02 mm thicker than that of steel strings. (The diameter of steel strings is normally 0.2 mm, and the thickness of bronze strings is 0.22 mm).

Figure 13 shows one time record graph for the Mahava. It is worth mentioning that experimental tests were conducted several times as discussed in the previous section, and the worst-case scenario results were selected to gain confidence about the validity of the analysis. Figure 14 compares the time response of the Delroba (Kamalian), Eshghi, and Mahava. The results obtained from the experiments are summarized in Table 1. As shown in this table, the Golden Method improved the radiation time of the Mahava by 2.4% and 3.2% compared with the Delroba and Eshghi, respectively. Moreover, the maximum recorded amplitude of the Mahava was slightly higher than that of the two other instruments.
In other words, Table 1 confirms that the Golden Method is able to enhance the capability of the setar in note keeping, even in comparison with well-reputed setars. Consequently, the results confirm the effectiveness of the proposed method in sound-hole size and location design in lute family musical instruments to promote their orchestral capabilities.
Moreover, the frequency response function (FRF) of the three instruments is also shown in Figure 15. As shown in this figure, the FRF trends are the same for all instruments and consequently, the golden method does not affect the frequency characteristics of the instruments. In other words, it is not a trade-off approach.
As shown in the above figures and tables, the Mahava is superior to the other well-known instruments from the sound radiation point of view, which is an important orchestral characteristic of a musical instrument. The other characteristics of the Mahava are the same as those of the Delbora and Eshghi. Consequently, the Golden Method could be introduced as a new successful approach to design and locate optimized sound-holes in musical instruments of the lute family. 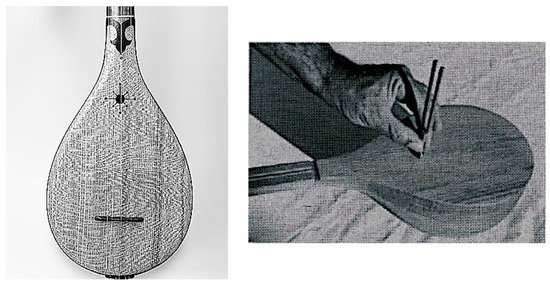 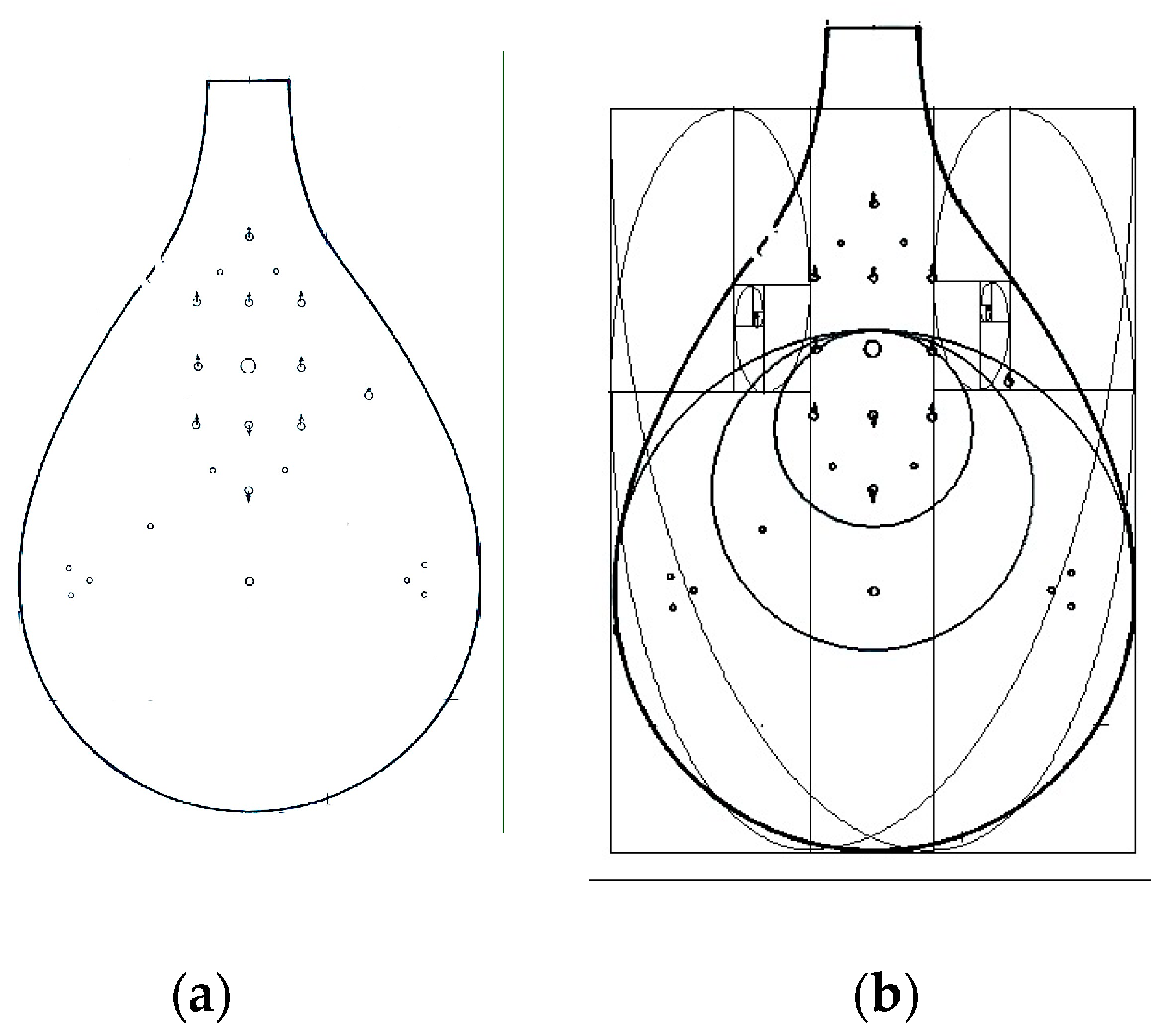 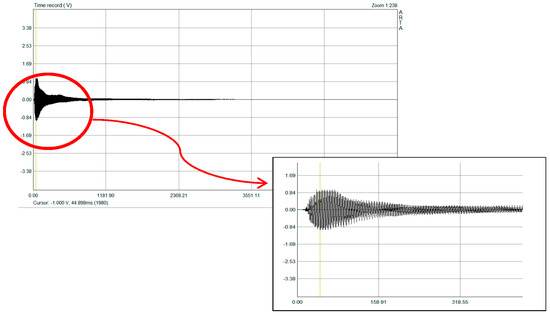 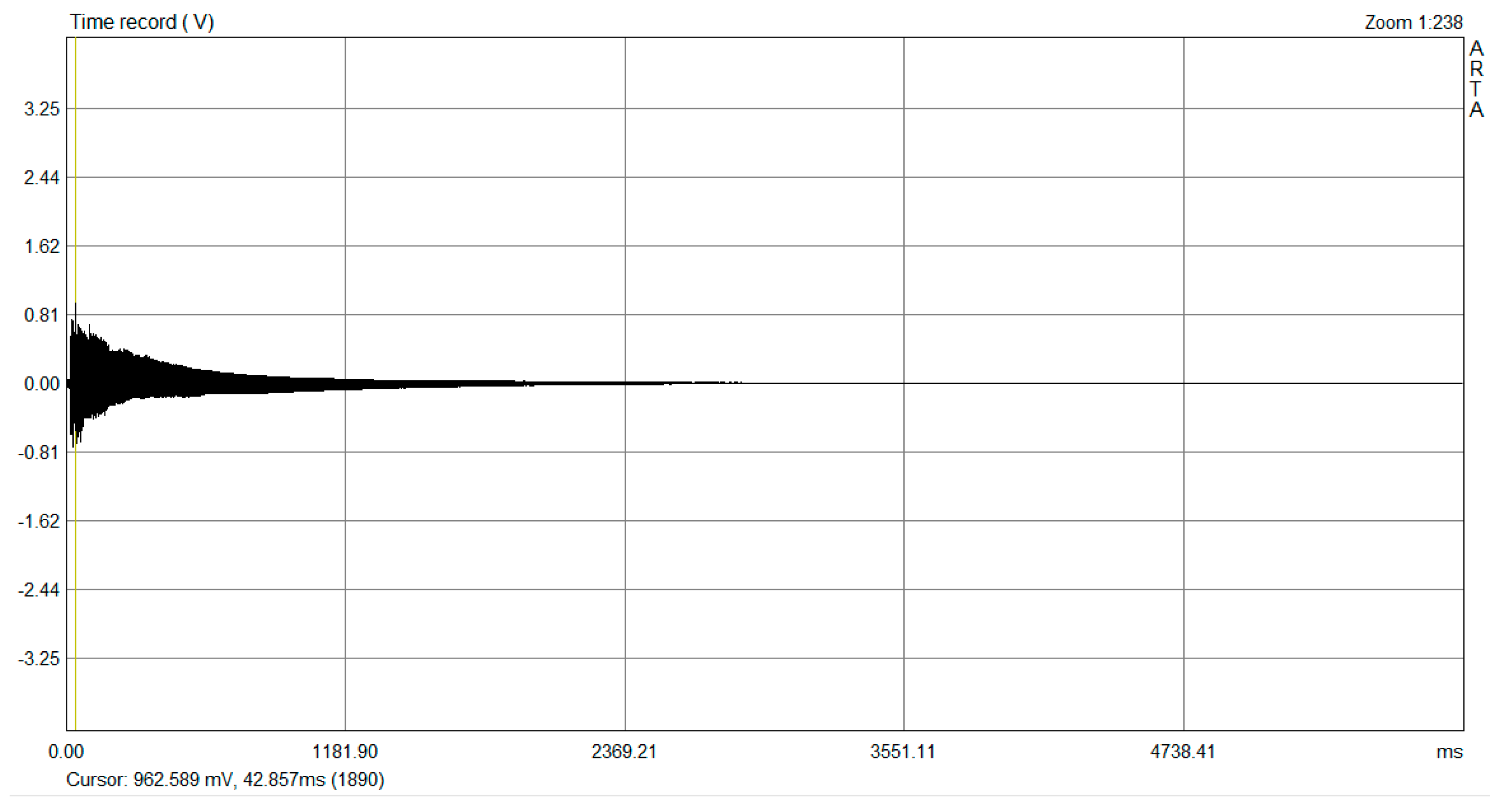 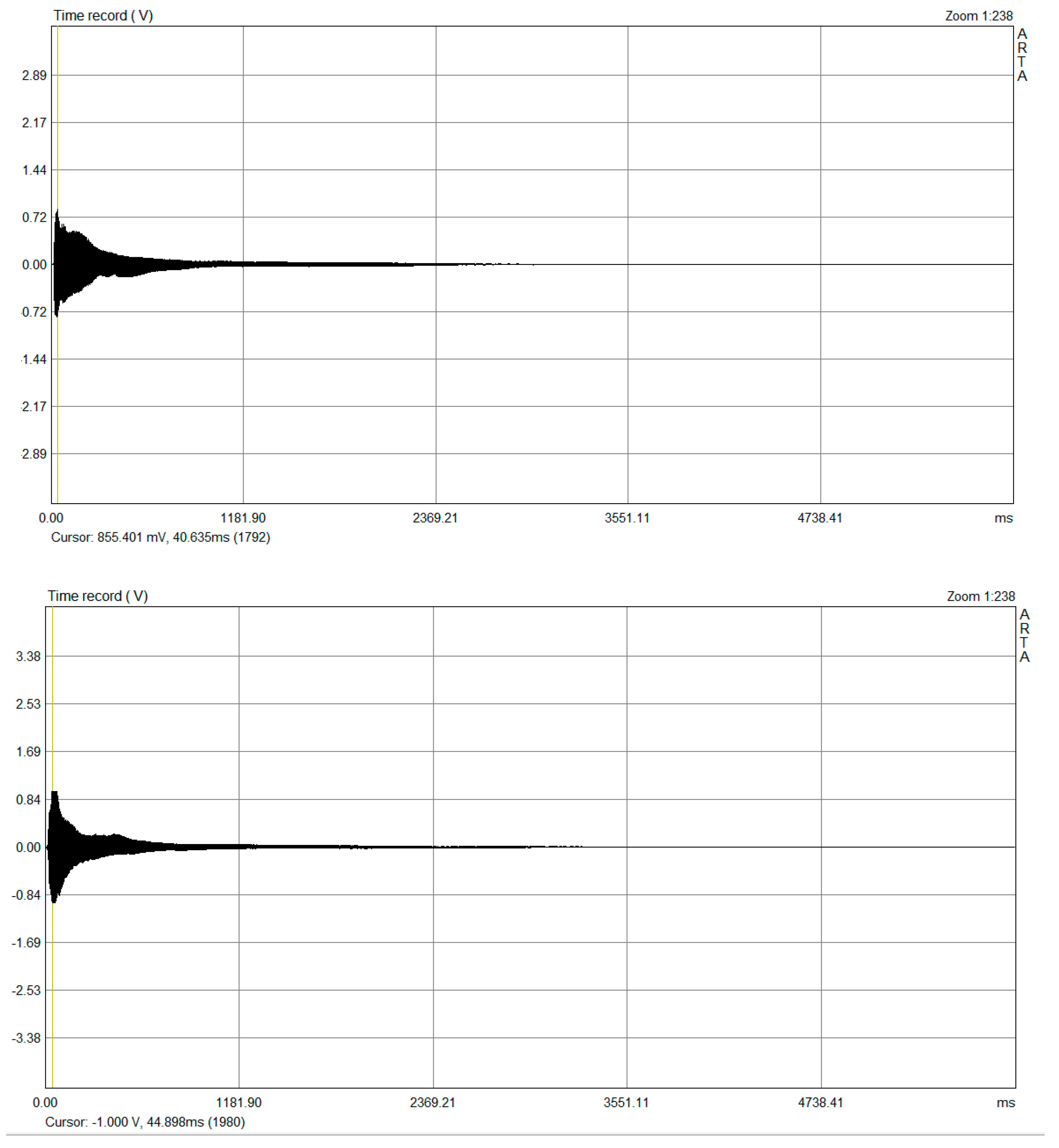 Table 1. Time response results.
Table 1. Time response results.
§ The time in which (and after which) the response amplitude would remain in the band of ±5% of the final amplitude.
© 2017 by the authors. Licensee MDPI, Basel, Switzerland. This article is an open access article distributed under the terms and conditions of the Creative Commons Attribution (CC BY) license (http://creativecommons.org/licenses/by/4.0/).
We use cookies on our website to ensure you get the best experience. Read more about our cookies here.
Accept
We have just recently launched a new version of our website. Help us to further improve by taking part in this short 5 minute survey here. here.
Never show this again