Commodified citizenship—pay x number of dollars and you can have all the rights of citizenship without any of the traditional duties and obligations—has been on the rise in developing countries since the early 1990s. This article is a case study of such a program on the island nation of Dominica. Ostensibly established as a means to aid the country in its efforts to move away from a monoagricultural economy, this article demonstrates that in reality, the government has become fully dependent on the commodified citizenship program, which has become its primary source of quick liquid revenue. Furthermore, we argue that the program can be an excellent tool for the transnational capitalist class which needs to work around political restrictions on their cross-border movements. With a growing effort to impede movement across countries and re-entrenchment of national border across the world, efforts to penetrate national border boundaries and established systems of exclusions through the visa processes have prompted creative and alternative routes for cross-border mobility. The contention here is that commodified citizenship is just one such creative alternative route and is especially ingenious as it is fully legal and uses the very institutions that seek to hinder mobility. View Full-Text
Keywords: commodified citizenship programs; small island-nation development; transnational capitalism commodified citizenship programs; small island-nation development; transnational capitalism
►▼ Show Figures 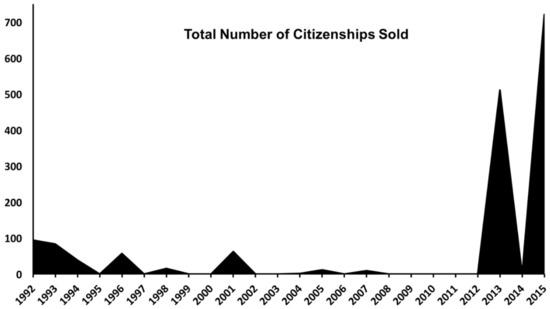