Aspects, Including Pitfalls, of Temporal Sampling of Flying Insects, with Special Reference to Aphids

We synthesize the evidence from molecular phylogenetics, extant distribution, and plate tectonics to present an insight in ancestral areas, dispersal routes and the effectiveness of geographic barriers for net-winged beetle tribes (Coleoptera: Lycidae). Samples from all zoogeographical realms were assembled and phylogenetic relationships for ~550 species and 25 tribes were inferred using nuclear rRNA and mtDNA markers. The analyses revealed well-supported clades at the rank of tribes as they have been defined using morphology, but a low support for relationships among them. Most tribes started their diversification in Southeast and East Asia or are endemic to this region. Slipinskiini and Dexorini are Afrotropical endemics and Calopterini, Eurrhacini, Thonalmini, and Leptolycini remained isolated in South America and the Caribbean after their separation from northern continents. Lycini, Calochromini, and Erotini support relationships between the Nearctic and eastern Palearctic faunas; Calochromini colonized the Afrotropical realm from East Asia and Metriorrhynchini Afrotropical and Oriental realms from the drifting Indian subcontinent. Most tribes occur in the Oriental and Sino-Japanese realms, the highest alpha-taxonomic diversity was identified in Malesian tropical rainforests. The turn-over at zoogeographical boundaries is discussed when only short distance over-sea colonization events were inferred. The lycid phylogeny shows that poor dispersers can be used for reconstruction of dispersal and vicariance history over a long time-span, but the current data are insufficient for reconstruction of the early phase of their diversification. View Full-Text
Keywords: Coleoptera; Elateroidea; Lycidae; molecular phylogeny; zoogeography; zoogeographic realms; zoogeographic boundaries; diversity Coleoptera; Elateroidea; Lycidae; molecular phylogeny; zoogeography; zoogeographic realms; zoogeographic boundaries; diversity
►▼ Show Figures 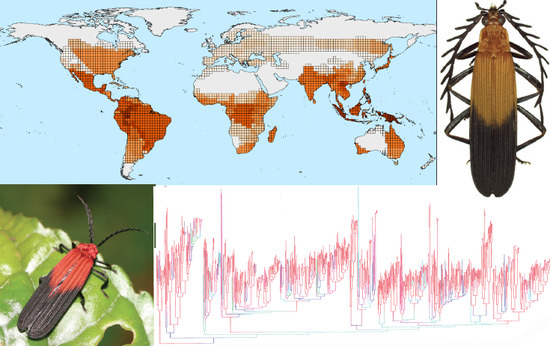