The Development of Cytogenetic Maps for Malaria Mosquitoes

One of the first tasks of worker honey bees (Apis mellifera) during their lifetime is to feed the larval offspring. In brief, young workers (nurse bees) secrete a special food jelly that contains a large amount of unique major royal jelly proteins (MRJPs). The regulation of mrjp gene expression is not well understood, but the large upregulation in well-fed nurse bees suggests a tight repression until, or a massive induction upon, hatching of the adult worker bees. The lipoprotein vitellogenin, the synthesis of which is regulated by the two systemic hormones 20-hydroxyecdysone and juvenile hormone, is thought to be a precursor for the production of MRJPs. Thus, the regulation of mrjp expression by the said systemic hormones is likely. This study focusses on the role of 20-hydroxyecdysone by elucidating its effect on mrjp gene expression dynamics. Specifically, we tested whether 20-hydroxyecdysone displayed differential effects on various mrjps. We found that the expression of the mrjps (mrjp1–3) that were finally secreted in large amounts into the food jelly, in particular, were down regulated by 20-hydroxyecdysone treatment, with mrjp3 showing the highest repression value. View Full-Text
Keywords: juvenile hormone; ecdysone; vitellogenin; social insect; mrjp; apalbumin; division of labor juvenile hormone; ecdysone; vitellogenin; social insect; mrjp; apalbumin; division of labor
►▼ Show Figures 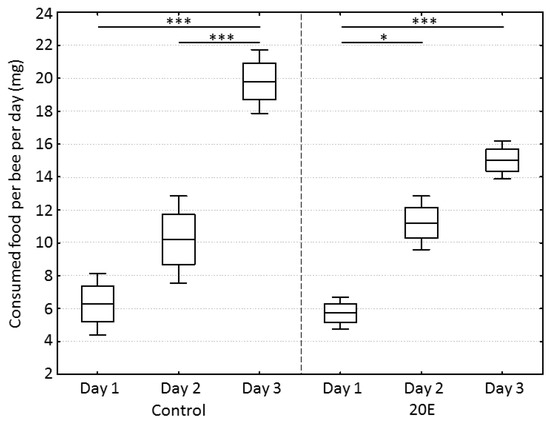