Towards the Development of a More Accurate Monitoring Procedure for Invertebrate Populations, in the Presence of an Unknown Spatial Pattern of Population Distribution in the Field

Like other members of the tribe Xyleborini, Xyleborus bispinatus Eichhoff can cause economic damage in the Neotropics. X. bispinatus has been found to acquire the laurel wilt pathogen Raffaelea lauricola (T. C. Harr., Fraedrich & Aghayeva) when breeding in a host affected by the pathogen. Its role as a potential vector of R. lauricola is under investigation. The main objective of this study was to evaluate three artificial media, containing sawdust of avocado (Persea americana Mill.) and silkbay (Persea humilis Nash.), for rearing X. bispinatus under laboratory conditions. In addition, the media were inoculated with R. lauricola to evaluate its effect on the biology of X. bispinatus. There was a significant interaction between sawdust species and R. lauricola for all media. Two of the media supported the prolific reproduction of X. bispinatus, but the avocado-based medium was generally more effective than the silkbay-based medium, regardless whether or not it was inoculated with R. lauricola. R. lauricola had a neutral or positive effect on beetle reproduction. The pathogen was frequently recovered from beetle galleries, but only from a few individuals which were reared on inoculated media, and showed limited colonization of the beetle’s mycangia. Two media with lower water content were most effective for rearing X. bispinatus. View Full-Text
Keywords: ambrosia beetle; ambrosia fungi; beetle–fungus symbiosis; Coleoptera; Curculionidae; Lauraceae; Persea americana; Persea humilis; Scolytinae; Xyleborini ambrosia beetle; ambrosia fungi; beetle–fungus symbiosis; Coleoptera; Curculionidae; Lauraceae; Persea americana; Persea humilis; Scolytinae; Xyleborini
►▼ Show Figures 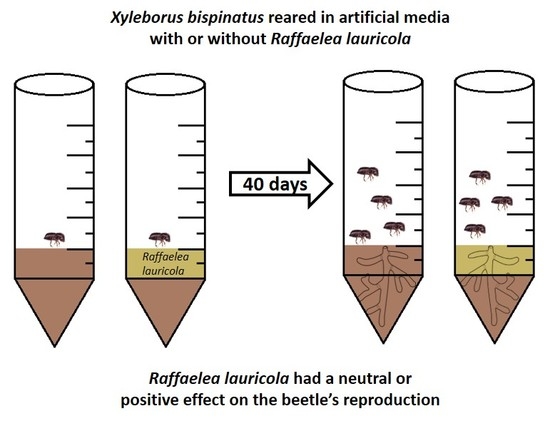