The Bionomics of the Cocoa Mealybug, Exallomochlus hispidus (Morrison) (Hemiptera: Pseudococcidae), on Mangosteen Fruit and Three Alternative Hosts
Next Article in Special Issue

Complex agricultural landscapes support a diverse community of beneficial insects and ecosystem services that in turn support crop productivity [1,2,3,4]. Yet, for most of the 20th century agricultural landscapes have become increasingly homogeneous due to increased expansion of specialized, monoculture production systems [5]. Loss of diversity and structural complexity from agro-ecosystems is one of the primary drivers of declines in biodiversity and associated ecosystem services worldwide [6,7]. In particular, the loss of habitat diversity in agro-ecosystems leads to a reduction in the abundance and diversity of beneficial insects including pollinators and natural enemies [4,8,9,10]. In recent years, there has been significant interest in practices that increase farmland diversity in ways that restore ecosystem services while maintaining crop productivity [7,11,12].
One practice that has been explored in a number of cropping systems is the addition of wildflowers to crop borders. Wildflowers provide resources to natural enemies of crop pests including shelter from disturbance and overwintering habitat as well as a source of nectar, pollen, and alternative prey [13,14]. Wildflower borders have been found to increase predator populations in the crop when planted next to blueberries [15,16], cabbage [17,18], wheat [19,20] and tomato [21]. Nevertheless, wildflower plantings are not always successful at increasing natural enemy populations [22,23,24] due to both local and landscape level effects [25]. Landscape level effects include lack of a source population of natural enemies in the surrounding habitat or that natural habitat surrounding the crops can be too small and/or too far away for natural enemies to colonize the wildflower and crop habitats [25,26,27]. Local effects include farm management practices that can affect the establishment of natural enemies such as the use of broad-spectrum insecticides [28].
The addition of wildflower plantings in field margins can also have direct effects on crop pests. Wildflower borders may be a source for pest populations as well as beneficial insects. Pests can use the strips as refuge from disturbances or as overwintering sites. Generalist pests can feed on the flowering plant species throughout the summer [29]. In cases where wildflowers are a better resource for pests than they are for natural enemies, the population of pests in the wildflower border may spill over into the crop and increase crop damage. However, not all pests are expected to benefit from wildflower borders. Specialist pests that do not utilize the wildflowers as a resource for habitat or food may be negatively affected by the increased local plant diversity by interfering with host plant location [30,31].
In this study we explore the effect of adding wildflower borders to strawberry (Fragaria x ananassa) plantings on natural enemy and pest populations. Lygus lineolaris Say (Tarnished Plant Bug; Hemiptera: Miridae) and Stelidota geminata Say (Strawberry Sap Beetle; Coleoptera: Nitidulidae) are two of the most economically significant pests of strawberries grown in the Northeastern USA, therefore we have explicitly evaluated their populations separately from other herbivores surveyed.
The tarnished plant bug, L. lineolaris, is a generalist pest known to feed on over 300 species of plants [32]. Without control efforts, it can damage up to two-thirds of a strawberry crop [33]. L. lineolaris overwinters in protected areas including leaf litter, hedgerows, or plant debris [34] and higher densities have been observed in blueberry and tomato fields with wildflower borders [16,35]. Alternatively S. geminata, a fruit-feeding specialist, does not appear to benefit from wildflower plantings [16]. S. geminata has increased as a pest in strawberries due to the operation of pick-your-own strawberry fields that leave ripe strawberries in the field [36]. Despite its common name, S. geminata is not a specialist of strawberry; the adult and larva feed on ripe fruit of many different genera including crops such as raspberry, blueberry, apple, melon, and sweet corn [37]. Adults overwinter in wooded areas or in blueberry and raspberry plantings [38]. Predator prey relationships are not well described for either species with the exception of specialist parasitoids [39,40]. The eggs, immatures and adults of both species are not known to be chemically protected and would be an appropriate sized prey for carabids, spiders, huntsman and other generalist arthropod predators
In this study, we hypothesized that (1) natural enemy abundance will be greater in crop plantings with a wildflower margin compared to control plots without a wildflower border; and (2) the abundance of the generalist pest, L. lineolaris, will remain stable or even increase in crop plantings with adjacent wildflower borders, while S. geminata, a pest that does not utilize the floral resources of a wildflower strip, will decrease in crop plantings with adjacent wildflower borders.

The study was conducted in the summer of 2014 on six research farms in the area around the New York State Agricultural Experiment Station in Geneva, NY, USA. On each farm, two 10 × 15 m experimental plots consisting of five rows of strawberry (var. “Jewel”) were established in the spring of 2012. Plots were managed without use of fungicides or insecticides and weeded by hand with the exception of a pre-emergent herbicide applied in the fall of 2013. Plots were separated by a minimum of 200 m and were randomly assigned to either a control border or a native perennial wildflower planting. Composition and management of control borders were representative of field edge management practices in the region and consisted primarily of orchard grass (Dactylis glomerata L.; Poaceae), which was regularly mown over the growing season. Wildflower borders were established in the fall of 2012 along the edge of one of the outside rows of the strawberry plantings. Wildflower plantings were 4 m wide by 10 m long and consisted of the following 11 US native perennial species: Zizia aurea (Apiaceae), Penstemon digitalis (Plantaginaceae), Coreopsis lanceolata (Asteraceae), Potentilla fruticosa (Rosaceae), Vironicastrum virginicum (Plantaginaceae), Agastache nepetoides (Laminaceae), Silphium perfoliatum (Asteraceae), Lobelia siphilitica (Campanulaceae), and Solidago altissima (Asteraceae). These species were selected based on their attractiveness to beneficial insects [41,42] and provide overlapping bloom periods so that flowers are present throughout the growing season.
Pest surveys were conducted in each strawberry planting during the fruit ripening period in June 2014. This period was selected because it is the window in which damage caused by these fruit feeding pests occurs. All plots were sampled on the same day. Insects were collected by vacuuming once along all five rows of each planting for approximately 5 minutes with a modified D-VAC type suction sampling device (Echo ES 230 Shred ‘n Vac, Lake Zurich, IL, USA, 20 cm cone diameter). The contents of the sample were placed in an ethyl acetate kill jar before being frozen at −20 °C. Frozen samples were later sorted and known economically important pests including L. lineolaris and S. geminata were identified to species. All remaining arthropods were identified to order or family and then placed into functional groups based on the predominant life history exhibited by their taxonomic group (i.e., herbivorous or predacious).
Additionally, pitfall traps were deployed between strawberry rows (n = 4) in each plot to better characterize the ground dwelling insect communities. Functionally important predators in the system such as spiders and carabid beetles are more likely to be collected by this method [43,44,45]. Therefore, vacuum and pitfall samples were used as complimentary methods to estimate natural enemy community composition. Pitfall traps consisted of 16 oz SOLO brad cups set flush with the soil surface and filled with 50 mL of a 5% dish soap killing solution. Traps were deployed over a three-day period once in each plot.
To determine the impact of wildflower strips on the abundance of different functional groups we used generalized linear mixed effect models with a poison error distribution. Response variables included the abundance of each functional group or taxa and fixed effects included the interaction between functional group class and plot treatment (wildflower border or control). Random effects included treatment within farm to account for the nested experimental design. Abundances from vacuum samples and pitfall traps were modeled separately. Pairwise contrasts for the difference between abundances in control and wildflower treatments plots were performed using the pairs function and the lsmeans package in R. Differences in community composition between sampling types and crop border treatments were assessed using permutational-MANOVA with 999 permutations on Bray-Curtis dissimilarities.

The effects of wildflower borders on pests have important implications for farmers and integrated pest management programs. As more farmers and integrated pest management (IPM) programs implement wildflower borders into their plans for conserving pollinators and natural enemies, they also need to consider how pests are responding. This study suggests that wildflower borders can increase ground-dwelling predators within the crop and decrease the abundance of economically significant pests overall. However, when the main pest can use the resources in the wildflower border, spillover of pests from wildflower plantings may lead to an increase in their population within the crop, and alternative methods of control will be needed to regulate these pests.

We thank three anonymous reviewers for improvements to the manuscript. We also thank Alison Wentworth and Steve Hesler for their assistance in the field. Ellie McCabe thanks the New York State Agricultural Experiment Station’s Summer Research Scholars Program for funding and support to conduct this research. This work was supported in part by a Northeast SARE graduate student grant to HG (GNE12-036). 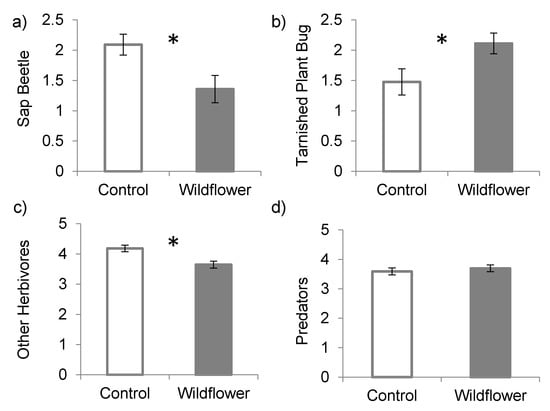 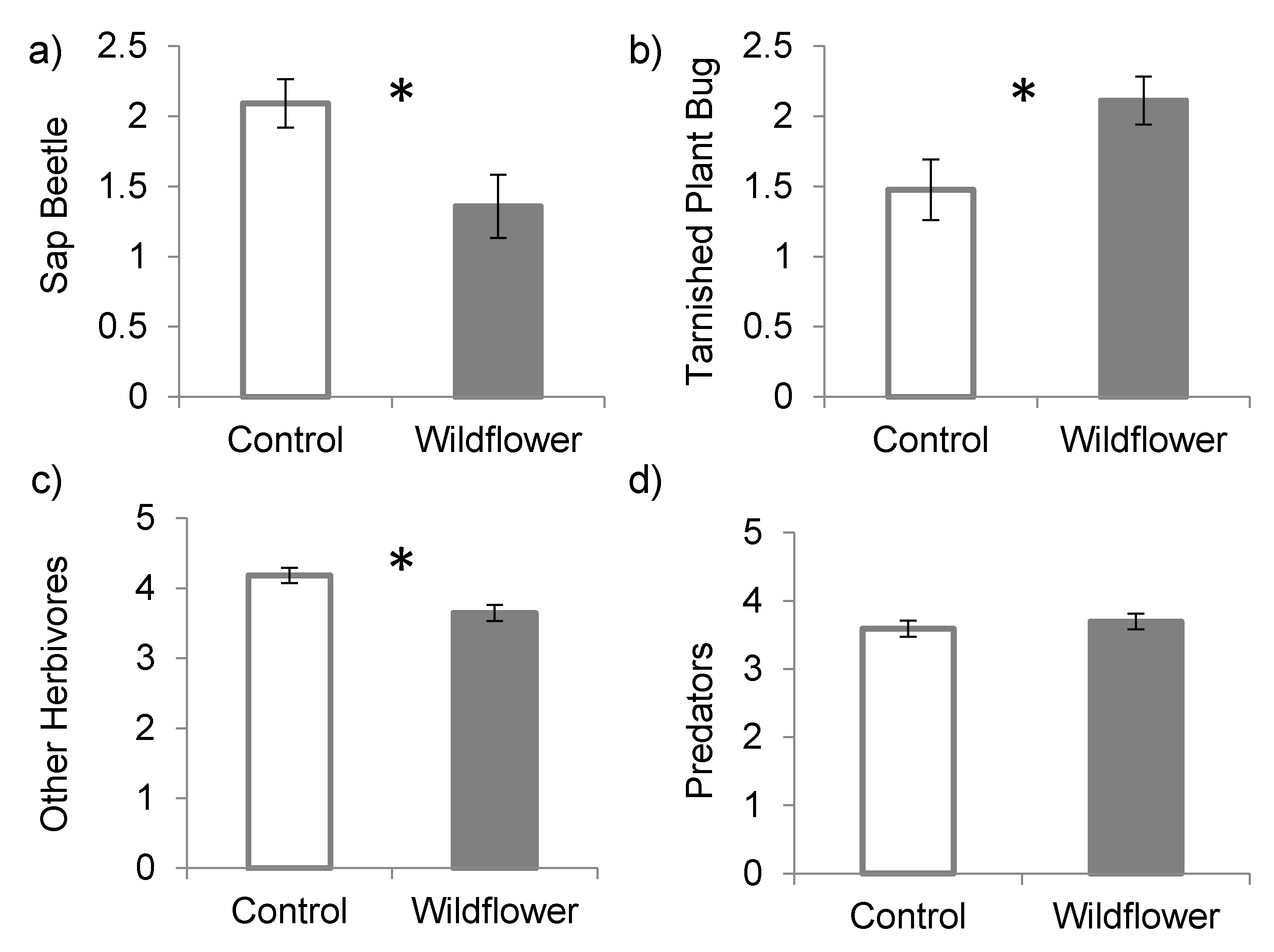