Screening of Repellents against Vespid Wasps

We investigated within-tree population density of a new invasive species in southern California, the goldspotted oak borer, Agrilus auroguttatus Schaeffer (Coleoptera: Buprestidae), with respect to host species and the community of other borers present. We measured emergence hole densities of A. auroguttatus and other borers on the lower stem (bole) of naïve oaks at 18 sites in southern California and on co-evolved oaks at seven sites in southeastern Arizona. We sampled recently dead oaks in an effort to quantify the community of primary and secondary borers associated with mortality—species that were likely to interact with A. auroguttatus. Red oaks (Section Lobatae) produced greater densities of A. auroguttatus than white oaks (Section Quercus). On red oaks, A. auroguttatus significantly outnumbered native borers in California (mean ± SE of 9.6 ± 0.7 versus 4.5 ± 0.6 emergence holes per 0.09 m2 of bark surface), yet this was not the case in Arizona (0.9 ± 0.2 versus 1.1 ± 0.2 emergence holes per 0.09 m2). In California, a species that is taxonomically intermediate between red and white oaks, Quercus chrysolepis (Section Protobalanus), exhibited similar A. auroguttatus emergence densities compared with a co-occurring red oak, Q. kelloggii. As an invasive species in California, A. auroguttatus may affect the community of native borers (mainly Buprestidae and Cerambycidae) that feed on the lower boles of oaks, although it remains unclear whether its impact will be positive or negative. View Full-Text
Keywords: host suitability; invasive species; oak ecosystems; phloem and wood borer; population dynamics host suitability; invasive species; oak ecosystems; phloem and wood borer; population dynamics
►▼ Show Figures 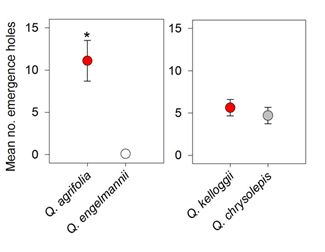