A Review of the Evolution of Termite Control: A Continuum of Alternatives to Termiticides in the United States with Emphasis on Efficacy Testing Requirements for Product Registration
Next Article in Special Issue

Longer mtDNA Fragments Provide a Better Insight into the Genetic Diversity of the Sycamore Lace Bug, Corythucha ciliata (Say, 1832) (Tingidae, Hemiptera), Both in Its Native and Invaded Areas
Previous Article in Journal

How Did Seal Lice Turn into the Only Truly Marine Insects?

The handsome cross grasshopper is one of the most abundant and widely distributed grasshopper species over the steppe and semi-desert territories of Eurasia. In many areas, especially in east Mongolia and north-east China, it is a very common and dangerous pest on agriculture fields and pasturelands. However, the species was relatively rare in the steppes of west Siberia until the 1960s, but by the end of the last century, the geographic and ecological distribution of the handsome cross grasshopper was changed significantly. Nowadays, it often occurs across all steppes of the south-eastern part of West Siberian Plain, its abundance is high, and its populations are found in the forest-steppes and also on the eastern side of the Ob River. The authors tried to use ecologo-geographic modelling to estimate how species distribution may change in the near future.

Oedaleus decorus is a widely distributed acridid over the Eurasian semi-arid territories, from the Atlantic coast to the Pacific coast. In many semi-arid territories, O. decorus was and is the most important pest, but in the south-eastern part of West Siberian Plain, it was not considered a pest until the 1960s. We compared two sets of data on the acridid distribution in the region: before 1960 and from 1961 until 2021. Until the 1960s, the species occurred mainly in the southern steppes. Since the 1960s, its distribution changed significantly. Nowadays, it occupies almost all local steppes and the southern part of the forest-steppes and can be also found on the eastern side of the Ob River. These shifts may be explained by both climatic changes and changes in human activities. During upsurges the densities of O. decorus were often more than one to two adults per square meter. It is often abundant in the same habitats and in the same periods as the Italian locust (Calliptamus italicus)—one of the most important acridid pests. This means during joint outbreaks these two species can simultaneously damage almost all spectrum of plants. View Full-Text
Keywords: distribution; range; dispersal; South Siberia; dynamics; population; plant protection; outbreak; Italian locust distribution; range; dispersal; South Siberia; dynamics; population; plant protection; outbreak; Italian locust
►▼ Show Figures 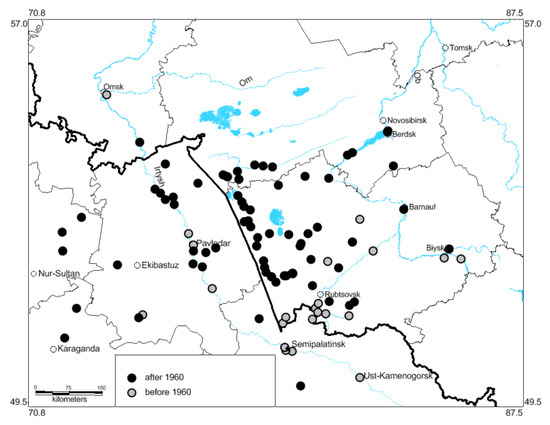