The predatory gall midge is one of the most effective natural enemies of the two-spotted spider mite, which is an economic pest causing a severe impact on a wide variety of plants worldwide. In general biocontrol programs, midges have been reared in insectaries and released into agriculture fields or greenhouses. In this study, we tested the effect of temperature on the development and survival of the predatory gall midge. The results showed that temperature played a crucial role in determining the emergence time and survival rate at each development stage. We described the responses to temperatures using several equations and estimated the values for explaining the observed biological patterns. The developed equations suggested that 23.3–28.7 °C temperatures were suitable for the total immature stage. In contrast, conditions around 8 °C and 35 °C should be avoided due to the high mortality. These results can help to determine the effective temperatures for both rearing and releasing, and ultimately contribute to the successful biological control of the spider mite. 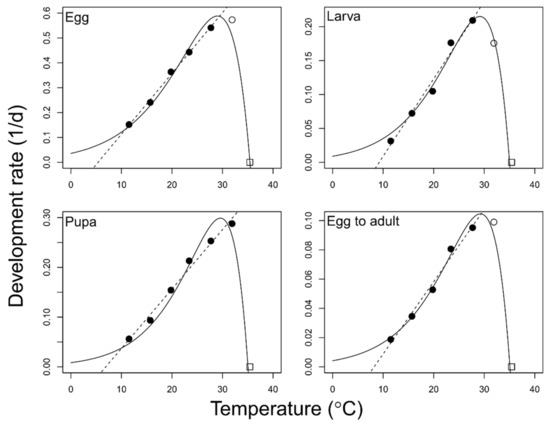