Does the Infectious Status of Aphids Influence Their Preference Towards Healthy, Virus-Infected and Endophytically Colonized Plants?

Climate change, and in particular the increase in temperature we are currently observing, can affect herbivorous insects. Aphids, as poikilothermic organisms, are directly exposed to temperature increases that influence their metabolism. Heat stress causes disturbances between the generations and the neutralization of reactive oxygen species (ROS). The aim of this work is focused on explaining how the aphid, using the example of Aphis pomi, responds to abiotic stress caused by temperature increase. The experiment was carried out under controlled conditions at three temperatures: 20, 25, and 28 °C. In the first stage, changes in the activity of enzymatic markers (superoxide dismutase (SOD), catalase (CAT), glutathione S-transferase (GST), β-glucosidase, polyphenol oxidase (PPO), and peroxidase (POD)) were determined in aphid tissues, at each temperature. In the second stage, microcalorimetry monitored changes in heat emitted by aphids, at each temperature. Our results showed that A. pomi defense responses varied depending on temperature and were highest at 28 °C. The flexible activity of enzymes and increase in the metabolic rate played the role of adaptive mechanisms and ran more effectively at higher temperatures. The A. pomi thus protected itself against ROS excessive induction and the aphids were able to respond quickly to environmental stress. View Full-Text
Keywords: aphids; environmental stress; enzymatic markers aphids; environmental stress; enzymatic markers
►▼ Show Figures 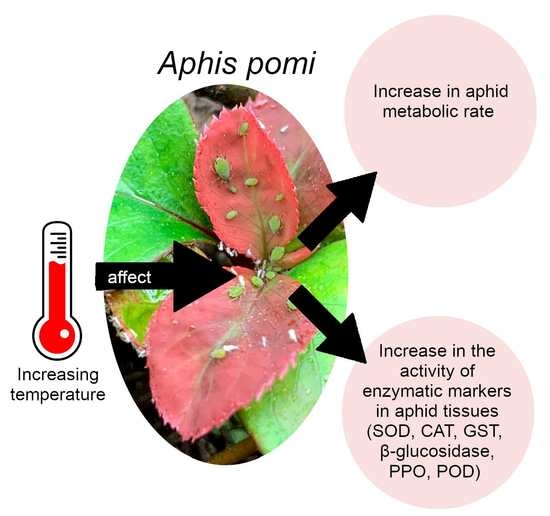