Relish is a key NF-κB transcription factor of the immune-deficiency (Imd) pathway that combats infection by regulating antimicrobial peptides (AMPs). Understanding of the fundamental role of Tenebrio molitor Relish (TmRelish) in controlling of Listeria monocytogenes virulence through the regulation of both AMPs and autophagy-related (ATG) genes is unclear. Here, we show that TmRelish transcripts were highly abundant in the larval fat body and hemocytes compared to the gut upon L. monocytogenes infection. Furthermore, significant mortality was observed in TmRelish-silenced larvae after intracellular insult. To investigate the cause of this lethality, we measured the induction of AMPs and ATG genes in the TmRelish dsRNA-treated T. molitor larvae. The expression of TmTenecin-1, TmTenecin-4, TmColeptericin-1, TmAttacin-2, and TmCecropin-2 were suppressed in the fat body and hemocytes of dsTmRelish-injected larvae during L. monocytogenes infection. In addition, TmRelish knockdown led to a noticeable downregulation of TmATG1 (a serine-threonine protein kinase) in the fat body and hemocytes of young larvae 6 h post-infection (pi). The notable increase of autophagy genes in the early stage of infection (6 h pi), suggesting autophagy response is crucial for Listeria clearance. Taken together, these results suggest that TmRelish plays pivotal roles in not only regulation of AMP genes but also induction of autophagy genes in response to L. monocytogenes challenge in fat body and hemocytes of T. molitor larvae. Furthermore, negative regulation of several AMPs by TmRelish in the fat body, hemocytes, and gut leaves open the possibility of a crosstalk between Toll and Imd pathway. View Full-Text
Keywords: Tenebrio molitor; Relish; NF-κB; antimicrobial peptides; autophagy; Listeria monocytogenes Tenebrio molitor; Relish; NF-κB; antimicrobial peptides; autophagy; Listeria monocytogenes
►▼ Show Figures 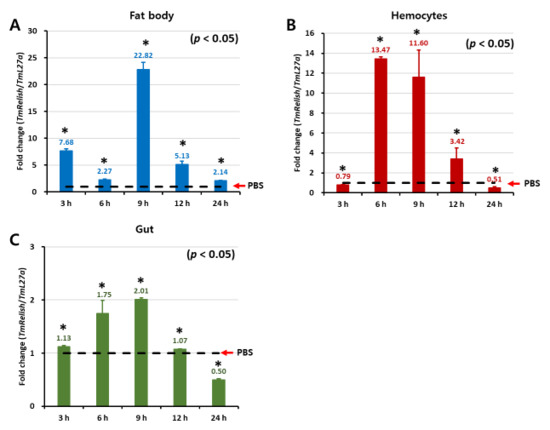