The parasitic wasp Anaphes flavipes (Förster, 1841) (Hymenoptera: Mymaridae) is an important egg parasitoid of cereal leaf beetles. Some species of cereal leaf beetle co-occur in the same localities, but the host specificity of the wasp to these crop pests has not yet been examined in detail. A lack of knowledge of host specificity can have a negative effect on the use of this wasps in biological control programs addressed to specific pest species or genus. In this study, laboratory experiments were conducted to assess the host specificity of A. flavipes for three species of cereal leaf beetles (Oulema duftschmidi Redtenbacher, 1874, Oulema gallaeciana Heyden, 1879 and Oulema melanopus Linnaeus, 1758) in central Europe. For the first time, a new host defence against egg parasitoids occurring in O. gallaeciana from localities in the Czech Republic, a strong dark sticky layer on the egg surface, was found and described. The host specificity of A. flavipes was studied in the locality with the presence of this defence on O. gallaeciana eggs (the dark sticky layer) (Czech Republic) and in a control locality (Germany), where no such host defence was observed. Contrary to the idea that a host defence mechanism can change the host specificity of parasitoids, the wasps from these two localities did not display any differences in that. Respectively, even though it has been observed that eggs with sticky dark layer can prevent parasitization, the overall rate of parasitization of the three species of cereal beetles has not been affected. However, in our view, new host defence can influence the effects of biological control, as eggs of all Oulema spp. in the locality are protected against parasitization from the wasps stuck on the sticky layer of the host eggs of O. gallaeciana. View Full-Text
Keywords: parasitoid-host interaction; biological control; host spectrum; Mymaridae parasitoid-host interaction; biological control; host spectrum; Mymaridae
►▼ Show Figures 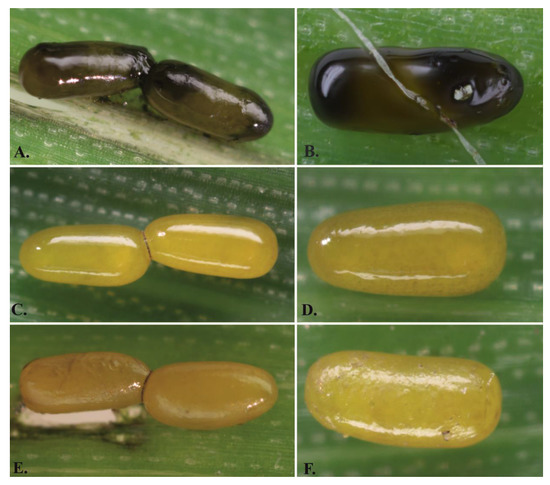