Current Distribution of the Olive Psyllid, Euphyllura olivina, in California and Initial Evaluation of the Mediterranean Parasitoid Psyllaephagus euphyllurae as a Biological Control Candidate

The olive psyllid, Euphyllura olivina, is a newly invasive species to California with the potential to become an economical pest if it reaches the olive production regions of California’s Central Valley. Here, we report on surveys undertaken in California to assess the psyllid’s current distribution and the occurrence of parasitism. Additionally, we present results of foreign collections of its parasitoids and initial non-target studies of a possible biological control agent, the Mediterranean parasitoid Psyllaephagus euphyllurae. The current distribution of the psyllid appears to be limited to the California coast between Monterey and San Diego; there have been no reports of infestations on olives in the major production areas of central and northern California. Psyllaephagus euphyllurae was the major primary parasitoid found in our foreign collections. The potential non-target impact of P. euphyllurae was tested on three native North American psyllid species: Neophyllura arctostaphyli, Euglyptoneura nr. robusta, and Calophya nigrella. No P. euphyllurae developed on the non-target species during no-choice tests. Behavioral observations in choice tests confirmed no attack on the non-target hosts, although the parasitoid did remain longer on N. arctostaphyli-infested manzanita plants, and revealed no host feeding behavior. View Full-Text
Keywords: olive psyllid; Euphyllura olivina; Psyllaephagus euphyllurae; California; distribution; foreign collections; classical biological control; non-target assessment olive psyllid; Euphyllura olivina; Psyllaephagus euphyllurae; California; distribution; foreign collections; classical biological control; non-target assessment
►▼ Show Figures 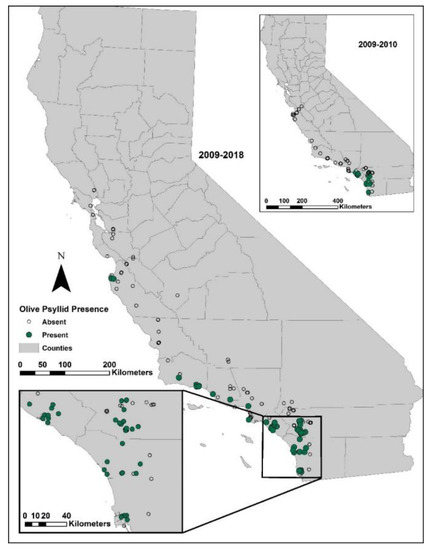