Species Composition, Temporal Abundance and Distribution of Insect Captures Inside and Outside Commercial Peanut Shelling Facilities

Invasion History of Sirex noctilio Based on COI Sequence: The First Six Years in China

Sirex noctilio F. (Hymenoptera: Siricidae: Siricinae), a new invasive species in China, is a significant international forestry pest which, transported via logs and related wood packing materials, has led to environmental damage and substantial economic loss in many countries around the world. It was first detected in China in 2013, and since then infestations have been found in 18 additional sites. Using a 322 bp fragment of the mitochondrial barcode gene COI, we studied the genetic diversity and structure of S. noctilio populations in both native and invaded ranges, with a specific focus in China. Twelve haplotypes were found across the native and invaded distribution of the pest, of which three were dominant; among these there were only one or two mutational steps between each pair of haplotypes. No obvious genetic structure was found other than in Chinese populations. China has a unique and dominant haplotype not found elsewhere, and compared with the rest of the world, the genetic structure of Chinese populations suggested a multiple invasion scenario. View Full-Text
Keywords: Sirex noctilio; invasive species; genetic structure; haplotype network; mitochondrial marker Sirex noctilio; invasive species; genetic structure; haplotype network; mitochondrial marker
►▼ Show Figures 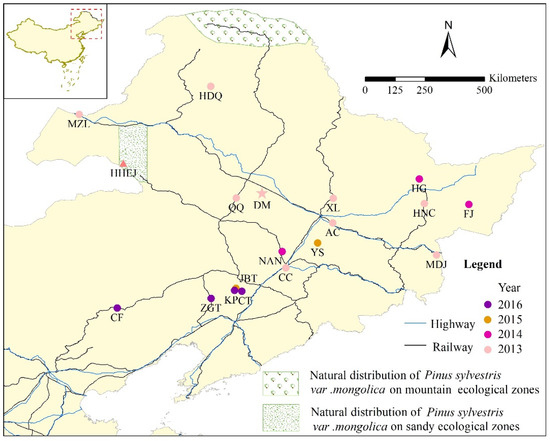