Bruchid beetles are the pests of many plant species worldwide. One or more grubs can develop inside a seed by consuming it and impairing its germination. Vachellia trees are important for preserving diverse and healthy arid ecosystems, but they are often threatened by human activities and hostile environmental conditions. Seed predation by bruchid beetles is one of the major causes of the decline in the populations of Vachellia trees in Israel. In a hyper-arid desert ecosystem affected by two major oil spills (in 1975 and 2014), we evaluated whether oil pollution increases seed predation rates of the seeds of Vachellia tortilis and V. raddiana. We recorded remarkably high predation rates for both species, particularly at the ground level, which suggests that conservation measures to reduce repeated infestations on fallen pods may be important to preserve these tree species. However, we found no clear evidence of a negative effect of oil pollution on seed predation, indicating that it did not increase the vulnerability of the seeds to bruchids even in trees affected by the recent oil spill.

Acacia trees are keystone species in many arid environments, supporting high levels of plant and animal diversity. In Israel, the populations of Vachellia (formerly Acacia) tortilis (Forssk.) and V. raddiana (Savi) are declining at an alarming rate. Severe infestations by bruchid beetles (Coleoptera, Chrysomelidae) are among the major causes of seed mortality, but additional environmental stressors can reduce the defence level of the seeds, exacerbating their susceptibility to predators. In a hyper-arid desert ecosystem affected by two major oil spills (in 1975 and 2014), we quantified seed predation rates caused by insect granivores before and after the pods dropped to the ground. We recorded predation rates of up to 84% for both tree species, and higher predation rates at the ground level than in the canopy, suggesting that repeated infestations occur. These results reinforce the call to protect the populations of large ungulates such as gazelles, which kill the bruchids by feeding upon the pods, and promote seed germination and dispersion. We found no clear evidence of a negative effect of the oil spill on seed predation, indicating that oil pollution did not increase the vulnerability of the seeds to granivores even in trees affected by the recent oil spill. View Full-Text
Keywords: bruchid; ecological functions; Evrona Nature Reserve; germination; oil spill bruchid; ecological functions; Evrona Nature Reserve; germination; oil spill
►▼ Show Figures 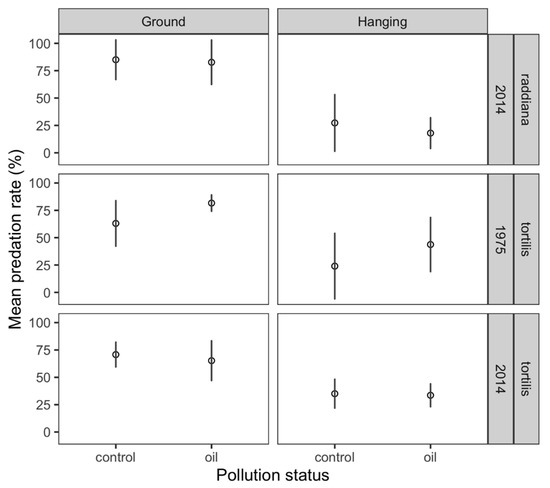