Oviposition Suitability of Drosophila Suzukii (Diptera: Drosophilidae) for Nectarine Varieties and Its Correlation with the Physiological Indexes
Previous Article in Journal

Mark-recapture methods constitute a set of classical ecological tools that are used to collect information on species dispersal and population size. These methods have advanced knowledge in disparate scientific fields, from conservation biology to pest control. Gathering information on the dispersal of mosquito species, such as Aedes aegypti, has become critical since the recognition of their role as vectors of pathogens. Here, we evaluate a method to mark mosquitoes that exploits the rare alkali metals rubidium (Rb) and caesium (Cs), which have been used previously to mark adult insects through feeding. We revised this method by adding Rb and Cs directly to water in which the immature stages of Ae. aegypti were allowed to develop. We then assessed the effect of Rb- and Cs-enriched water on fitness, survival and bioaccumulation in both adult females and their eggs. Results indicated that Cs had adverse effects on Ae. aegypti, even at low concentrations, whereas Rb at low concentrations had no measured effects on exposed individuals and accumulated at detectable levels in adult females. The method described here relies on passive uptake of Rb during immature stages, which has the benefit of avoiding handling or manipulation of the dispersive adults, which enables purer measurement of movement. Moreover, we demonstrated that Rb was transferred efficiently from the marked females to their eggs. To our knowledge, Rb is the only marker used for mosquitoes that has been shown to transfer vertically from females to eggs. The application of Rb rather than more traditional markers may therefore increase the quality (no impact on released individuals) and quantity (both adults and eggs are marked) of data collected during MR studies. The method we propose here can be used in combination with other markers, such as stable isotopes, in order to maximize the information collected during MR experiments. View Full-Text
Keywords: invasive species; Aedes aegypti; mark-recapture; species dispersal; alkali metals; vector of pathogens invasive species; Aedes aegypti; mark-recapture; species dispersal; alkali metals; vector of pathogens
►▼ Show Figures 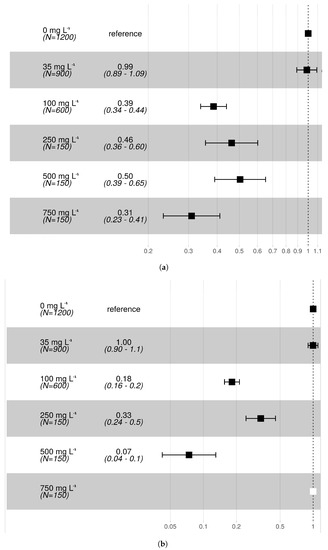