Mosquitoes of Etiological Concern in Kenya and Possible Control Strategies

The brown marmorated stink bug, Halyomorpha halys (Hemiptera: Pentatomidae), is an invasive species in North America and Europe that damages many different host plants. Substantial work has been conducted on the genetic diversity and invasion pathways of H. halys in some of the countries where it has been found, based on mitochondrial sequences. The main objective of the present study was to further explore the genetic diversity of invasive populations of H. halys exploiting both mitochondrial and nuclear markers. We used two molecular markers: the mitochondrial Cytochrome Oxidase I (COI) gene, an ideal standardized molecular marker for distinguishing closely related species, and the ribosomal Internal Transcribed Spacer 1 (ITS1), because only a few sequences of H. halys exist to this point in global databases. We used specimens from eight populations from Greece, Italy, Canada, and the US. Among the 14 haplotypes retrieved based on the mtCOI gene, two of them (H162–H163) were detected for the first time. These two haplotypes were found in specimens from Canada, Italy, and the US. Concerning the ITS1 region, 24 haplotypes were identified, with 15 being unique for a sampled population. In Greece and the US, 14 and 12 haplotypes were found, respectively, with 7 and 6 of them being unique for Greece and the US, respectively. Our analysis of the nuclear genes of H. halys indicates high genetic diversity of the invading populations in North America and Europe. View Full-Text
Keywords: brown marmorated stink bug; haplotype diversity; population genetics brown marmorated stink bug; haplotype diversity; population genetics
►▼ Show Figures 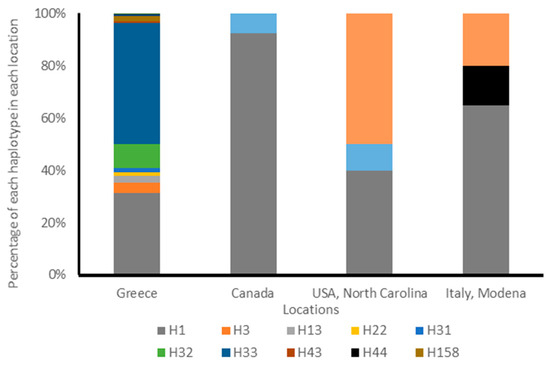