What Is the Carcass-Usage Mode of the Collembola? A Case Study of Entomobrya proxima in the Laboratory
Previous Article in Special Issue 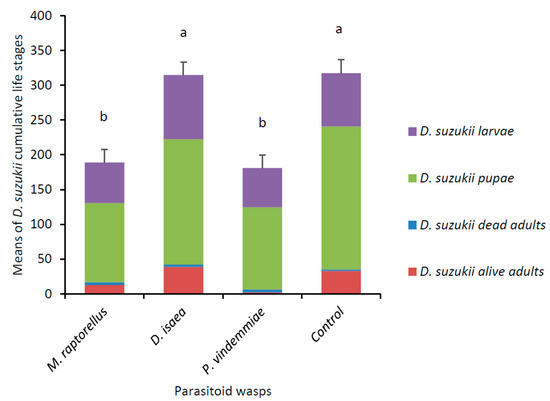 Bonneau, P.; Renkema, J.; Fournier, V.; Firlej, A. Ability of Muscidifurax raptorellus and Other Parasitoids and Predators to Control Drosophila suzukii Populations in Raspberries in the Laboratory. Insects 2019, 10, 68. https://doi.org/10.3390/insects10030068


Bonneau P, Renkema J, Fournier V, Firlej A. Ability of Muscidifurax raptorellus and Other Parasitoids and Predators to Control Drosophila suzukii Populations in Raspberries in the Laboratory. Insects. 2019; 10(3):68. https://doi.org/10.3390/insects10030068


Bonneau, Phanie, Justin Renkema, Valérie Fournier, and Annabelle Firlej. 2019. "Ability of Muscidifurax raptorellus and Other Parasitoids and Predators to Control Drosophila suzukii Populations in Raspberries in the Laboratory" Insects 10, no. 3: 68. https://doi.org/10.3390/insects10030068