Endothelial, Immunothrombotic, and Inflammatory Biomarkers in the Risk of Mortality in Critically Ill COVID-19 Patients: The Role of Dexamethasone
Previous Article in Journal

Nigel A. Calcutt
6 and

There is increasing recognition that processes within the spinal cord are key to modulating neuropathic pain, through amplification or suppression of peripheral nociceptive inputs. The neurotransmitters γ-aminobutyric acid (GABA) and glycine play a critical inhibitory role in regulating spinal nociceptive processing [1,2,3]. Diabetic rodents exhibiting behavioural markers of pain paradoxically show elevated basal and stimulus-evoked levels of the inhibitory neurotransmitter GABA in spinal CSF [4,5] and a reversal of GABAA receptor function, from inhibitory to excitatory, has been demonstrated [4]. Current evidence indicates a reduction in potassium (K+)/chloride (Cl−) symporter KCC2 in the dorsal spinal cord and subsequent elevation in intracellular/intraneural chloride concentration, which renders GABA, acting via GABAA receptors, less hyperpolarising and potentially depolarising [4]. This pro-nociceptive alteration is termed spinal disinhibition [6].
A potential biomarker of spinal disinhibition is rate-dependent depression of the H-reflex [7,8]. The H-reflex enables the study of proximal peripheral nerve conduction and provides insight into the function of spinal modulatory systems [9]. The H-reflex is modified when exposed to successive stimulations resulting in a decrease in the H-wave amplitude relative to the amplitude of the original H-wave [10] and is termed rate-dependent depression (HRDD). Although the precise neurophysiological substrate remains unclear, and indeed may be multifactorial, the magnitude of HRDD is known to be dependent on the function of inhibitory mechanisms in the spinal cord [11,12,13]. Accordingly, a loss of inhibition that accompanies the spasticity seen in animal models of spinal cord injury and following spinal cord injury in humans, results in a reduction in the magnitude of HRDD [10,14].
Both a loss of HRDD and altered behavioural indices of neuropathic pain are seen in rodent models of diabetes [4]. Moreover, both are also associated with reversal of GABAA inhibition, suggesting that they share a common pathogenic mechanism; spinal disinhibition [4,7]. Our recent research has demonstrated that loss of HRDD occurs in patients with painful diabetic neuropathy [8,15]. We suggest that loss or attenuation of HRDD may serve as a marker of spinal inhibitory dysfunction in a sub-set of patients where spinal disinhibition contributes to neuropathic pain. Thus, a potential clinical application of HRDD could be to enable identification of patients with painful diabetic neuropathy in whom the pain has either dominant peripheral or spinal drive, to allow mechanistically informed clinical trials and predict response to specific anti-neuropathic pain medications.
Currently, it is not known which HRDD parameters best distinguish between these sub-groups of patients. In preclinical and clinical studies, the stimulation trains used for eliciting HRDD have been of variable length and frequency, and HRDD has been calculated using a variety of individual or average response sequences. In our proof-of-concept clinical study in patients with diabetes, trains of three stimuli were delivered [8]. HRDD was calculated as the amplitude of stimulus 1 compared to stimulus 3, as qualitatively it was observed that H-reflex depression was greater at stimulus 3 than stimulus 2 [8]. Stimulation at 1 Hz produced the greatest separation between patients with and without painful neuropathy. In a follow-up study of a larger cohort of patients with diabetic neuropathy [15], trains of 10 stimuli were delivered at 1 Hz and the response to the initial stimulus was compared to the mean of all subsequent responses to mitigate against random and time course fluctuations.
Using signal detection theory methods, the purpose of the current investigation was to systematically assess which stimulation and response parameters best distinguish between patients with and without pain. This is critical to allow wider application of this technique as a balance needs to be struck between obtaining the most useful and relevant information with the practicalities of performing and tolerability of the investigation. To explore the utility of HRDD as a biomarker in painful diabetic neuropathy, we compared response trains at increasing stimulus frequencies, with the aim of defining the optimal parameters to segregate patients with spinal inhibitory dysfunction as a dominant pain mechanism.

Patients were recruited from secondary care diabetes clinics at one NHS trust over a period of 24 months. Convenience sampling was used, and all eligible patients were given the opportunity to take part in the research study. Control subjects were recruited via hospital and University advertisements. Written informed consent was obtained for each participant. Study conduct adhered to the tenets of the Declaration of Helsinki and Research Ethics Committee approval was granted on 28 February 2017 (Project identification code: 220627, East Midlands, Leicester South Research Ethics Committee, reference 17/EM/0076).

Patients with painful diabetic neuropathy (n = 53), patients without painful diabetic neuropathy (n = 75) and healthy control subjects (n = 36) were studied. The H-reflex was absent in 24 patients with diabetes (10 with type 1 and 14 with type 2 diabetes) and 2 control subjects, and these subjects were excluded from further assessment. Detailed demographic data, medical history and current medications, age, gender, ethnicity, type and duration of diabetes, co-morbidities, height, weight, blood pressure, HbA1c, lipids and renal function were documented. Other common causes of neuropathy were excluded based on a family history as well as testing for serum B12, folate, immunoglobulins, electrophoresis and anti-nuclear antibody. Participants underwent assessment of small and large nerve fibres using corneal confocal microscopy, nerve conduction studies and thermal thresholds along with assessment of HRDD. Visual analogue scale (VAS) pain scores (0–100) recording current, average and maximum pain ratings over the previous 24 h were documented. Patients were stratified into painful (DPN+) and painless (DPN-) cohorts based on the Toronto consensus that “the symptoms are distal, symmetrical, often associated with nocturnal exacerbations, and commonly described as prickling, deep aching, sharp, like an electric shock, and burning with hyperalgesia” for greater than 3 months, consistent with the requirement of pain chronicity defined by the International Association for the Study of Pain (IASP) [16]. All patients with a current, average or maximum VAS pain score >0 were placed in the pain cohort.

Nerve conduction and H-reflex studies were performed using a DANTEC Keypoint system (Dantec Dynamics Ltd., Bristol, UK). Participants were sat semi-recumbent at 45° with limb temperature maintained between 32–35°. Sural sensory amplitude (SNAP) and conduction velocity (SNCV) along with peroneal motor nerve amplitude (PMNAP) and conduction velocity (PMNCV) were recorded. For H-reflex studies, tibial nerve stimulation was performed using 1 ms square wave monophasic pulses delivered using surface silver-silver chloride electrodes to the popliteal fossa. Surface silver-silver chloride recording electrodes with a diameter of 9 mm were placed on the long axis of soleus. H-reflex recruitment curves were obtained to determine peak-peak H-reflex maximal amplitude (Hmax) by incrementing stimulation current by 1 mA. A minimal stimulation interval of 10 s was observed. For HRDD, a submaximal stimulus strength (to achieve a response of 75% of max) was used. A train of 10 stimuli were delivered (Figure 1) at 0.3, 0.5, 1, 2 and 3 Hz, giving 10 H-responses termed H1–H10 respectively. The frequency of the stimulation trains were delivered in a pseudo-randomised order with a minimum inter-train interval of 10 s. HRDD was calculated as the individual response value expressed as a percentage of response H1 or the mean of a group of responses, expressed as a percentage of response H1.

The current study provides a detailed comparison between individual and average HRDD stimulus responses to distinguish patients with painful diabetic neuropathy, specifically those whose pain is likely driven by spinal disinhibition. An average of responses H2–5 provided good to excellent predictive ability at all three frequencies, with 1 Hz proving optimal. In terms of clinical utility, the shortened train of five stimuli combined with a moderate stimulation frequency of 1 Hz makes HRDD a valuable tool which can easily be accommodated in a clinical setting in terms of equipment, time and most importantly patient tolerability. Longer trains may be required to investigate enhanced inhibitory processing in the spinal cord in painless diabetic neuropathy.

The study was conducted according to the guidelines of the Declaration of Helsinki, and approved by the Institutional Review Board (East Midlands, Leicester South Research Ethics Committee, reference 17/EM/0076).

Written informed consent has been obtained from the patients to publish this paper. 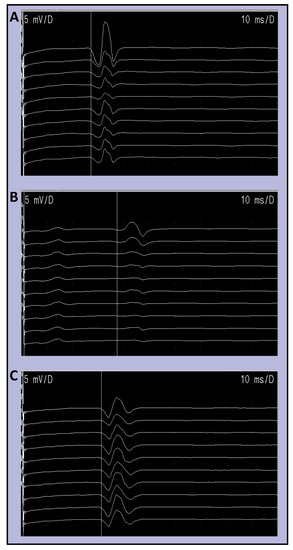 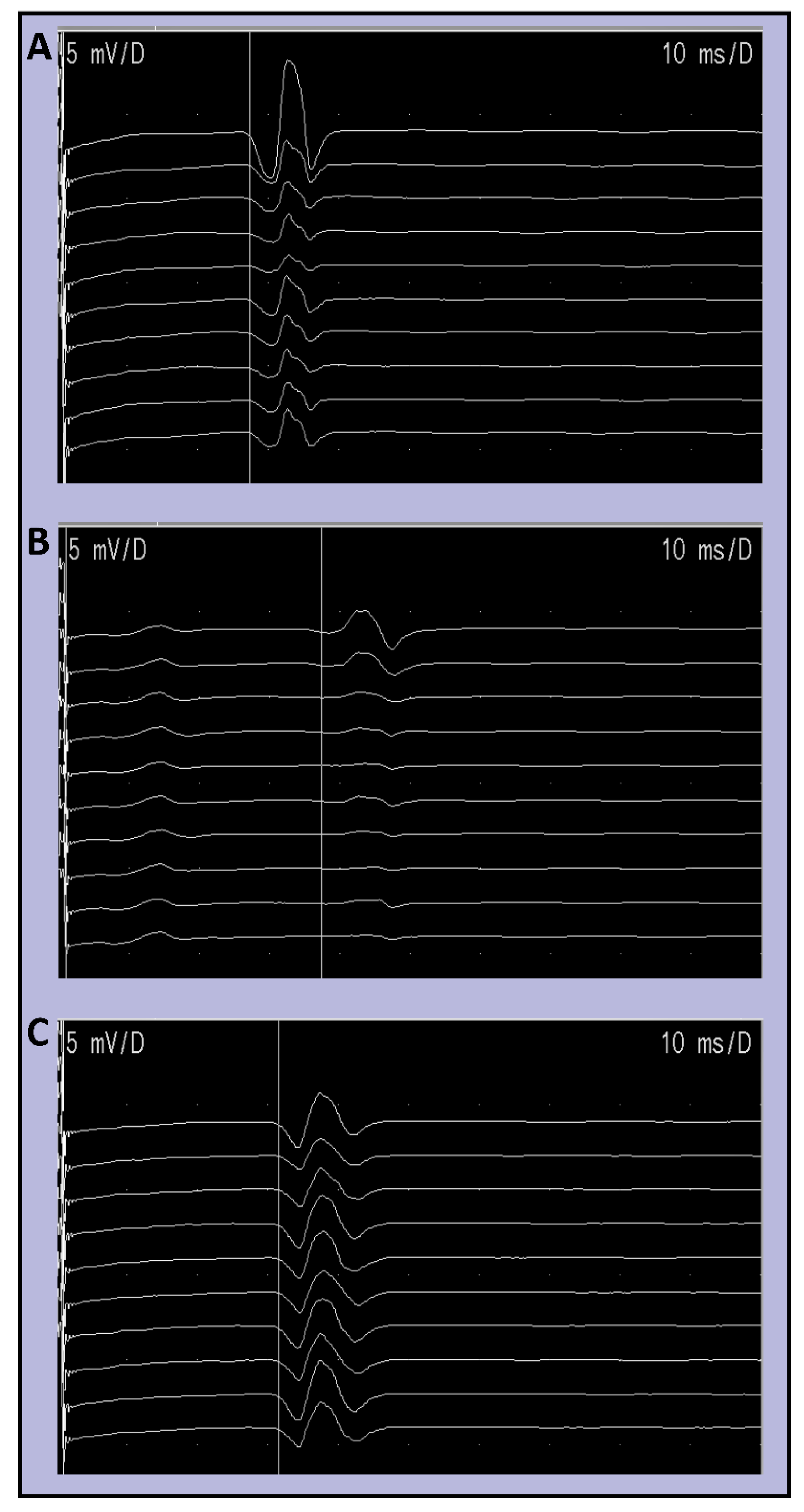