On the “Zero of Potential of the Electric Field Produced by the Heart Beat”. A Machine Capable of Estimating this Underlying Persistent Error in Electrocardiography

Modern electrocardiography (ECG) uses a constructed reference potential for the majority of leads. This reference potential, named after its inventor as the Wilson central terminal, is assumed to have negligible value and to be stationary during the cardiac cycle. However, the problem of its variability during the cardiac cycle has been known almost since the inception of 12-lead electrocardiography. Due to the cumbersomeness of the measurement system required to fully appreciate these variations, this topic has received scant research attention during the last 60 years. Taking advantage of modern electronic amplifiers’ capability to detect small voltages, drawing only femtoamperes from physiological equivalent signal sources and of the right-leg connection availability, we developed a complete electrocardiography device that, aside from the eight independent signals of the standard 12-lead ECG, allows direct recording of the Wilson central terminal components. In this paper, we present details of the circuit together with its initial clinical evaluation. For this trial, we recorded data from 44 volunteer patients at Campbelltown Hospital (Campbelltown, Australia) and we found that the Wilson central terminal amplitude, as foreseen by Frank and others in the 1950s, is not negligible, its amplitude in relation to the lead II is, on average, 51.2%, and thus it may be clinically relevant. View Full-Text
Keywords: electrocardiography; Wilson Central Terminal; potential reference electrocardiography; Wilson Central Terminal; potential reference
►▼ Show Figures 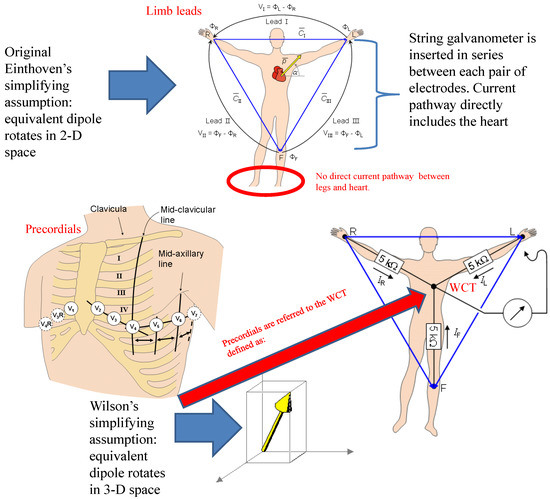