:
Supercritical hydraulically controlled overflow of Antarctic Bottom Water from the Weddell Sea has been observed in the Orkney Passage during field measurements in February 2022. The Orkney Passage is the main pathway for the densest layer of Antarctic Bottom Water flow from the Weddell Sea to the Scotia Sea. The bottom current overflows the sill across the passage and flows down from the crest of the sill at 3600 m deeper than 4000 m. The descending flow accelerates because of the difference in the height of the sill and its foot. An estimate of the Froude number of this flow was greater than unity. Near the foot of the slope the kinetic energy of the flow becomes insufficient to continue moving in this regime. The flow slows down, and strong mixing and warming of the bottom water occurs due to the exchange with the surrounding waters. This hydrodynamic phenomenon is called supercritical hydraulically controlled flow. However, the flow of bottom water continues further and eventually fills the abyssal depths of the Atlantic.
Keywords:
Orkney Passage; hydraulic control; subcritical; supercritical flows

We shall explain the physical phenomenon of hydraulic control following [10,11]. Fluids can transmit a signal by advection or wave propagation. We consider a water flow over an underwater ridge or dam. The flow from a deep reservoir overflows the crest of a dam or underwater ridge and spills down the spillway. A hydraulic jump is formed at the base of the spillway, which is an abrupt increase in the fluid depth (or depth of isopycnals) accompanied by turbulence, wave generation and mixing.
If perturbations of the flow appear upstream of the ridge (dam) crest, the waves (surface or internal) are generated, which can propagate in either direction. The flow downstream from the crest is so rapid that waves cannot propagate upstream. In other words, the velocity of the waves is smaller than the velocity of the descending flow. This type of flow is called supercritical. As the flow reaches the hydraulic jump, its velocity decreases and it returns to a subcritical state. In addition, the regime of the flow at the crest is critical, i.e., changing from subcritical to supercritical. Thus, the outflow from the reservoir is said to be choked or hydraulically controlled by the ridge (dam). The size of the dam, water depth and stratification are parameters that control the flow. A scheme of the phenomenon is shown in Figure 1a.
If the dam is low and the flow is slow the current just overflows the dam (Figure 1b).
Whitehead et al. [12] and Pratt and Whitehead [11] gave examples of hydraulic control in the passage between the Virgin Islands and in the Strait of Denmark; other examples were found in the Strait of Gibraltar [13,14].
This phenomenon has also been studied in laboratory experiments [15]. Even if the flow is subcritical, the flow entrains surrounding waters depending not only on the Froude number but also on the Reynolds number, as shown in [16]. The authors demonstrated this on the example of laboratory experiments and overflow in the Denmark Strait. Field measurements of a bolus of cold water overflowing the sill in the Denmark Strait and properties of the flow with variable velocity of the overflowing water were reported in [17]. Overflow in the Faroe Bank Channel was studied in [18].
We will show some more illustrative examples. First is the well-known Niagara Falls, which is a surface flow (Figure 2).
Another example is a flow over an underwater ridge in a less known region in the Kara Gates Strait between the Barents and Kara seas [19]. The phenomenon of the flow is very similar to that in the Strait of Gibraltar. A surface flow from the Barents Sea to the Kara Sea forms a hydraulic jump, whereas strong tidal currents over a sill generate large-amplitude internal tides [19,20,21] (Figure 3).
The flow of AABW through the Orkney Passage has been previously studied based on CTD/LADCP casts. A map of stations in different years is shown in Figure 4.

Seven CTD casts with velocity profiling (LADCP) were made in the cruise in 2022 in the Orkney Passage region. Five stations were made across the passage and two stations down into the Laurie Depression from the central station. The depth of the ridge across the passage is about 3600 m. The sounding stations were displaced to the north relative to the repeated section in order to exclude possible interference with moorings that could be placed in this area.
The stations were performed using a lowered acoustic doppler current profiler (LADCP) and conductivity, temperature, and depth (CTD) profilers mounted on a General Oceanics GO1018 rosette water sampler. The water sampler was equipped with a Valeport VA500 altimeter allowing measurements close to the ocean bottom (3–7 m above the seafloor). An Idronaut Ocean Seven 320plus CTD probe was used for the measurements together with an MKplus Deck Unit. The CTD data were collected using the standard package REDAS5. The declared accuracy of CTD measurements is 0.001 °C for temperature and 0.001 mS/cm for conductivity sensors. The LADCP data measured by the TRDI WorkHorse Monitor 300 kHz profiler were processed using the programming package LDEO Software version IX.10 [23]. The accuracy of velocity measurements estimated by the processing program is usually 3–4 cm/s. In the bottom layers due to the bottom track signals, the errors decrease to 1–2 cm/s.
The temperature section is shown in Figure 5.
One can see in Figure 5 and Figure 6 two characteristic features that are common to all flows in underwater channels. The cold core is displaced to the right side of the channel along the flow. This occurs due to the Ekman circulation, which arises from the bottom friction when the current flows in a narrow channel. A second core appears in the western (left) part of the passage above the bottom, which is displaced to the left of the flow and is located over the western wall of the channel [24]. The minimum potential temperature is −0.54 °C, which is close to the previous estimates [6].
The velocities of the flow in the passage correspond to similar flows in the southern hemisphere and in particular the flow in the Vema Channel. The core of the maximum velocity is displaced to the left side relative to the flow.
Let us now consider the downflow of bottom water after overflowing the ridge. Figure 7 shows the flow velocities down the slope. The flow accelerates due to the transition of potential energy on the crest of the ridge into kinetic energy. Due to the expansion of the passage, the flow becomes wider and after flowing down by more than 200 m at a distance of about 3500 m, the flow slows down, descending into the deep layers of the ocean and not having enough energy to continue the fast flow. The maximum flow velocities are close to 50 cm/s. The potential temperature behaves similarly, forming a tongue of cold water flowing down the slope (Figure 8). In the tongue of cold water, which rolls down the slope, the temperature gradually increases from −0.54 to −0.45 °C. Salinity distribution downslope in the direction of the descending flow is shown in Figure 9. Contour lines of salinity that show the further propagation of the flow downslope are more illustrative than the isotherms because bottom water is warming due to the contact with the overlying waters. The salinity increase is due only to mixing.
It was reported in [25] that hydraulically controlled flow over the sills is responsible for bottom mixing above the slope. A local overturning circulation cell is formed over the slope with increasing vertical velocity that mixes the bottom flow [25,26]. The flow regime changes as the velocity increases and the Froude number exceeds unity. The critical regime appears when the Froude number is Fr > 1. When the current overflows the sill of the Orkney Passage the Froude number is calculated as: where v is the meridional component of velocity, is the velocity of gravity waves in the shallow flow, H = 100 m is the thickness of the flow, is reduced acceleration due to gravity, ρ = 1 g/cm3 is the in situ density, g = 9.8 m s−1, and Δρ = 0.00013 g/cm3 in the overflowing current. The critical regime of overflowing appears when the bottom current exceeds v = 0.356 m s−1:

No studies involving humans were performed. Birds and mammals were observed using binoculars and photo cameras. No experiments with animals have been carried out.

Data are available upon request. 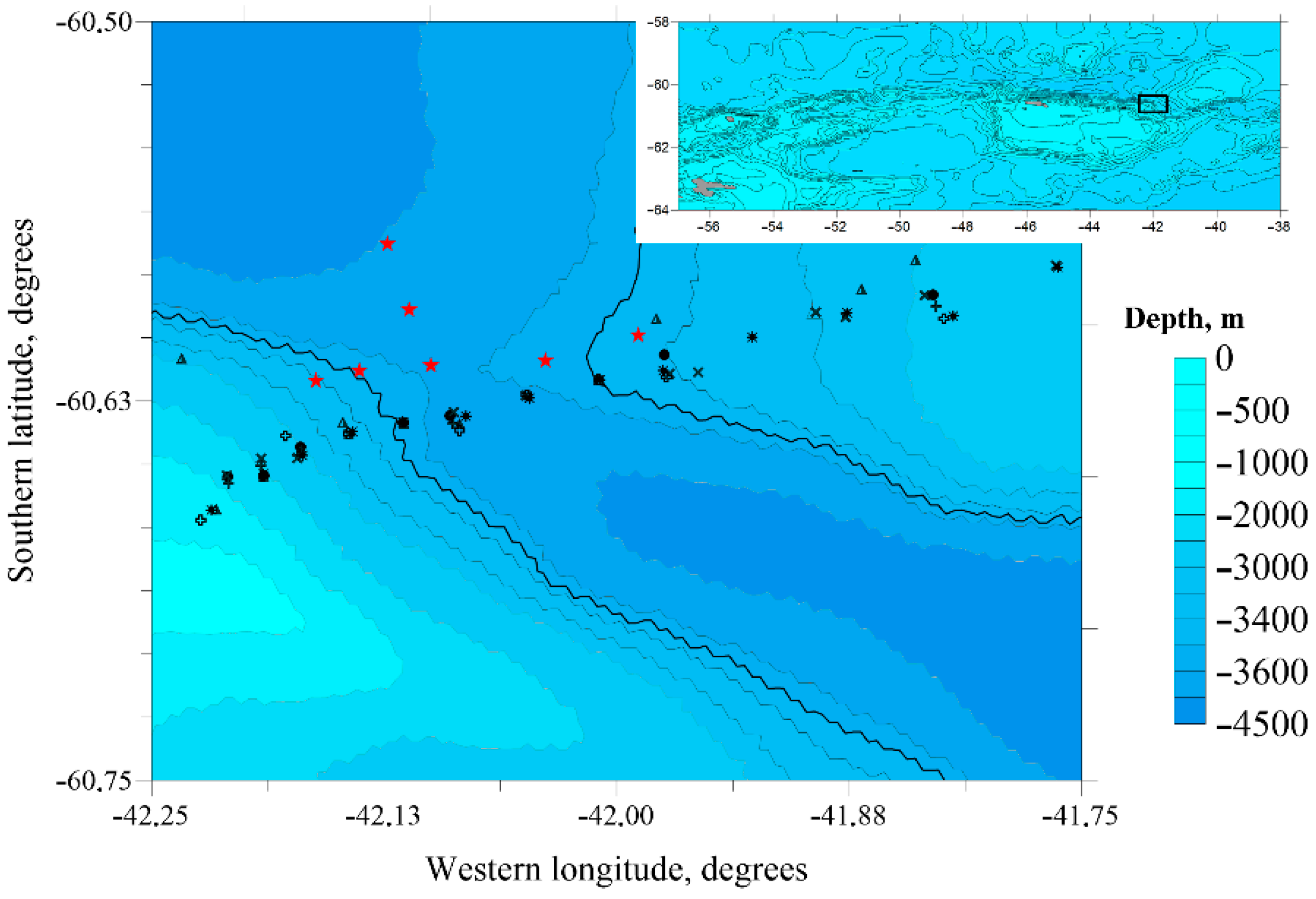 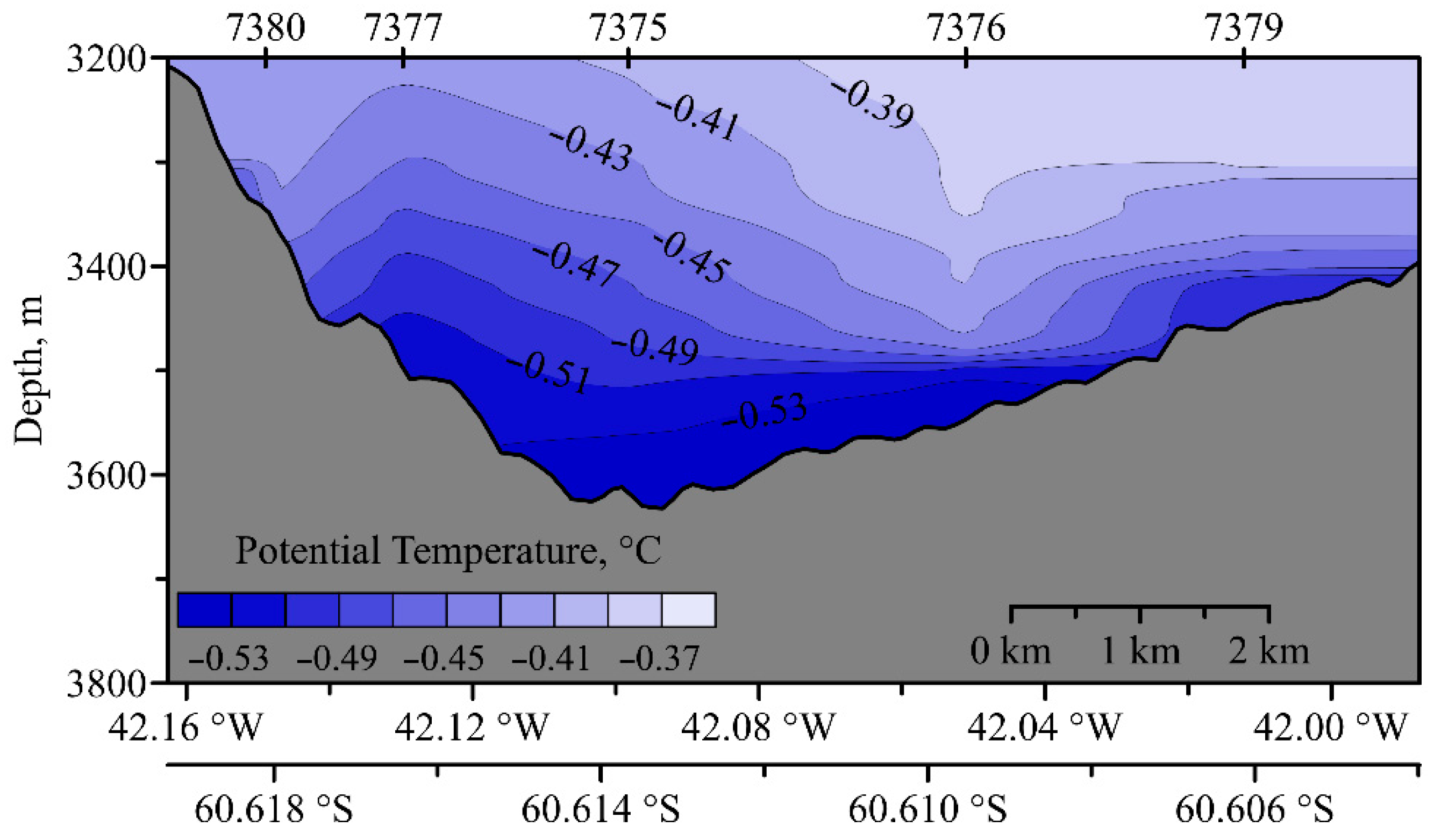 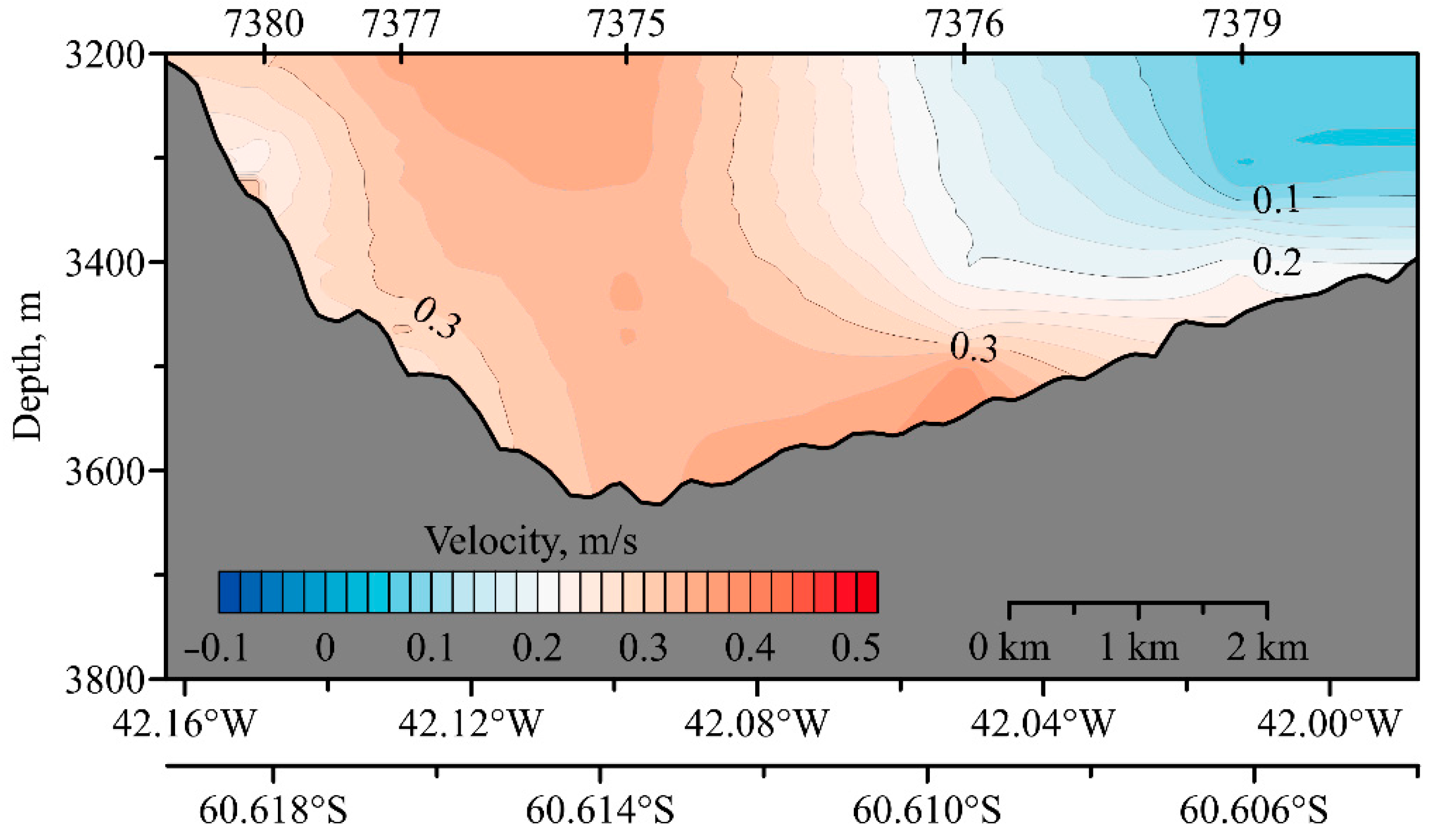