The Vietnamese Binh Thuan province located along the Southern Central part of the coast is one of the driest in the country. The population is relying largely on groundwater for irrigation, and the groundwater resources are threatened by climate change and saltwater intrusion in river estuaries. Recent studies, however, reveal that the extension of saltwater intrusions was larger than expected, raising some doubts on the actual origin of the intrusions. In this study, we use the geochemical characterization of groundwater samples collected in both the dry and rainy seasons in the Luy river coastal area to identify hydrochemical processes responsible for the salinization and variations taking place in the shallow aquifers. The distribution of chemical components of groundwater and the indicators presenting the freshening and salinization processes, such as cation exchange code and chloride conservative element, the ionic delta, the HFE-diagram, and geochemical modelling, were studied. The results show that 65% of the samples exceed the WHO limit for drinking water and 100% of them have a degree of restriction on use from slight–moderate to severe in potential irrigation problems according to FAO. In contrast to previous expectations, freshening is the dominant process in the aquifers, and it is more advanced in the rainy season. Due to a lack of recharge and aquifer exploitation, salinization is more severe in the deeper aquifer and during the dry season. Saltwater intrusion is not limited to the zone close to the river but extends further inland and at depth, and salinity can vary quickly over short distances. Based on these new insights, we develop a new conceptual model for the evolution of salinization in the Luy river catchment involving a natural freshening process of connate water combined with anthropic influence. The conceptual model will form the basis for the development of a groundwater model of the study area and eventually lead to sustainable management scenarios for this coastal region, preventing further deterioration of the groundwater resources. View Full-Text
Keywords: hydrochemistry; freshening; saltwater intrusion; coastal aquifer hydrochemistry; freshening; saltwater intrusion; coastal aquifer
►▼ Show Figures 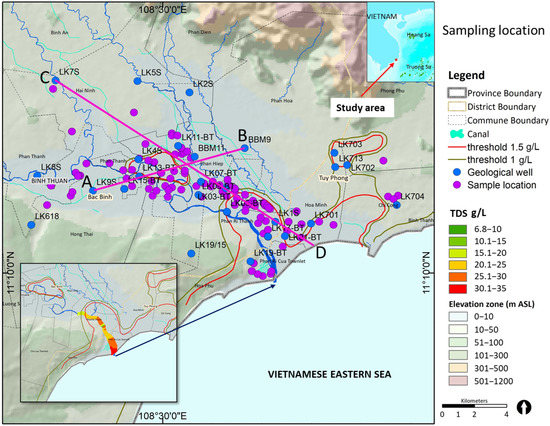